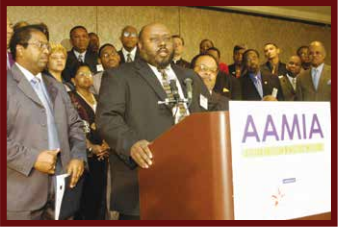 African American Ministers In Action (AAMIA) members heed the call to be a prophetic voice for our communities and our country. They share an understanding that grace gives both the responsibility and the courage to challenge systems of injustice. AAMIA members reject cynical strategies that would use the moral authority of the Black Church to build power for political leaders pursuing an agenda to further impoverish the most disadvantaged. Together, they raise their voices in pursuit of the broad vision of justice championed by Dr. Martin Luther King, Jr. All are advocates for public policies that support this vision. AAMIA is a project of People For the American Way, a 501(c)(4) non-profit organization, enabling it to participate in election-related activity, including the support of candidates where permitted. 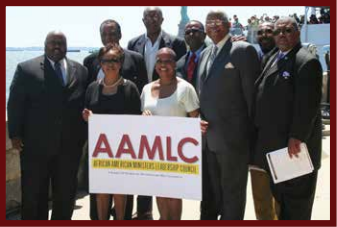 African American Ministers Leadership Council (AAMLC) celebrates the historic role of the Black Church as a place of refuge and a source of strength in the midst of oppression. AAMLC believes churches are called to be centers of caring and action, and that religious leaders are called to lead by example. Since 1997, AAMLC members have answered the call by giving pastors and ministry lay leaders tools and access to mutual support for strengthening congregational and community participation in civic life. AAMLC is a project of People For the American Way Foundation, a 501(c)(3) non-profit organization.