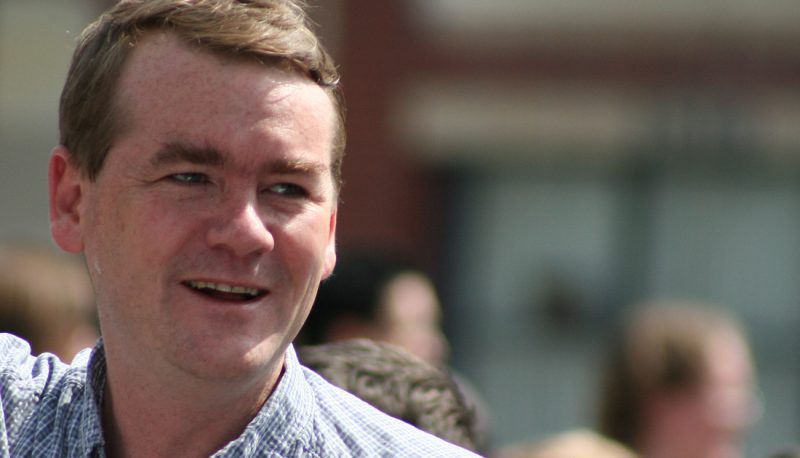 With Republican senators rubber-stamping all of Donald Trump’s judicial nominees—they’d confirm a ham sandwich if Trump nominated one—blue slips are the only tool Democrats have to protect our nation’s circuit courts from being taken over by ideological extremists hand-picked by the Federalist Society and Heritage Foundation. On Tuesday, Sen. Al Franken took a principled stand against intense political pressure and announced that he would not return his blue slip for David Stras, Trump’s nominee for the Eighth Circuit.

Unfortunately, according to reports, Colorado Sen. Michael Bennet has buckled to pressure and returned his blue slip for a similarly unqualified nominee, state Supreme Court Justice Allison Eid for the Tenth Circuit.

Eid is Trump’s choice to replace Neil Gorsuch, who has been elevated to the Supreme Court, but this seat does not need to be filled. In fact, the Judicial Conference of the United States took the highly unusual step of announcing that the Tenth Circuit’s caseload is so light that Gorsuch ought not be replaced. As the official entity charged by Congress to measure judicial caseloads and make recommendations for adding or subtracting judgeships, the nonpartisan Judicial Conference knows better than anyone when filling a judgeship would be an expensive waste of limited resources.

But even were that not the case, it’s clear that Allison Eid is not qualified to serve on the Tenth Circuit. Last year, she was on then-candidate Trump’s list of 21 potential Supreme Court nominees, a list created by the Federalist Society and the Heritage Foundation. She clearly passed these ultra-right organizations’ ideological litmus tests. Trump said during the campaign that his proposed justices would overrule Roe v. Wade: “That will happen automatically in my opinion, because I am putting pro-life justices on the court.” A nominee who opposes the constitutional right to abortion has no more place on our federal courts than one who opposes the constitutional right to free speech or equal protection.

Eid’s record confirms her unsuitability for the circuit court. In criminal cases, she would allow the state to run roughshod over the constitutional rights of criminal defendants. For instance, she was the lone dissenter in People v. Schutter (2011). In this case, a man named Devin Schutter accidentally left his cell phone in a locked convenience store bathroom (along with the bathroom key). He immediately asked a clerk to unlock the door and get the phone back, but the clerk said he was too busy and Schutter would have to come back later. So Schutter left and planned to return. But before he got back, the clerk turned the phone over to a police officer, who went through his text messages without a warrant and found incriminating texts about drug possession. The court recognized that the search was unconstitutional. However, Eid—the lone dissenter—wrote that Schutter had abandoned the phone and had no legitimate expectation of privacy in it, so the police didn’t need a warrant to search it. That is a deeply disturbing conclusion, since the defendant had clearly not abandoned his phone. But Eid was willing to make this distortion in order to empower the police to engage in constitutionally prohibited activities.

She was even willing to uphold a conviction when the trial judge himself acknowledged that he felt personally uncomfortable with the defense team’s attacks against the prosecution, which included a friend and former supervisor. After conviction in the first of several trials of the same defendant, the judge realized he could not continue to preside over the proceedings, and he recused himself. His replacement ruled that the recusal should apply to the already-tried case, since the judge had acknowledged feeling so upset that he could not continue. But Justice Eid wrote a majority decision in Schupper v. People (2007) reversing that decision, concluding that “a judge is not required to disqualify himself where a friend with whom the judge has little present social involvement makes a single appearance before the judge on behalf of the district attorney’s office.” As the dissent pointed out, the appearance of bias was irrelevant in this case, since the trial judge himself admitted so much discomfort that recusal was required. By setting up a straw man of apparent bias, Justice Eid was able to uphold a conviction tainted by actual bias. This also raises serious questions about how Eid herself would approach recusal decisions at the Tenth Circuit.

Justice Eid would erode the constitutional separation of church and state. In Taxpayers for Public Education v. Douglas County School District (2015), the court struck down a voucher program where parents could use the funds to pay religious schools as violating the state Establishment Clause prohibiting government aid to religion. Eid would have upheld the program, and she questioned whether anti-Catholic animus behind the state constitutional provision made it unenforceable. Religious conservatives seeking to erode church-state separation on both the federal and state levels would find an ally at the Tenth Circuit.

Eid wrote a dissent in Hanlen v. Gessler (2014) with a legal conclusion that distorted the plain meaning of a statute and would have handed victory to the conservative candidate in a nonpartisan school board election. A few days before votes were cast, an elections official realized that one of the candidates was actually ineligible. After 5 pm on Election Day, secretary of state Scott Gessler issued an emergency rule of general applicability: If an election official finds that someone on the ballot when voting has started is not eligible, then votes for that person are invalid and cannot be counted. This would have nullified votes for the union-supported candidate and handed the election to the conservative candidate (who ultimately received fewer votes). The majority struck the order down as inconsistent with state law, in part because election statutes require questions of eligibility to be decided by a court, not an election official. But Justice Eid disagreed, writing that since the disqualified candidate went to court to challenge her disqualification under the secretary’s rule, the rule is consistent with the statute’s requirement that a judge make the disqualification decision.

Eid’s writings reveal another aspect of her far-right ideology. She has authored numerous articles on federalism, placing her within the mold of ultra-conservative scholarly writers who right-wing organizations want on the federal bench. Questions about the relationship between federal and state governments are not the type that state courts tend to address. But as a circuit court judge, she would be empowered to shape the law to fit her legal philosophy across a wide range of issues, threatening to undermine the legal precedents supporting the New Deal. As she enthusiastically wrote in 2002:

After a six-decade hiatus, the U.S. Supreme Court has reentered the federalism debate with a bang. The Court’s “New Federalism” decisions have reinvigorated federalism norms in constitutional jurisprudence across a broad array of doctrinal categories, including the Tenth Amendment, the Eleventh Amendment, and the Interstate Commerce Clause. Where this movement will end is anyone’s guess, but its beginnings are clear. The Court’s message appears to be that the federal government should think twice before it injects federal regulations into a state’s business.

There are many reasons to oppose Allison Eid’s nomination. Sen. Bennet could have stopped it in its tracks, but he didn’t. Instead of using the blue slip, the only effective tool left to Senate Democrats to prevent a right-wing takeover of our federal court system, he ended up advancing the nomination of an ideological extremist.