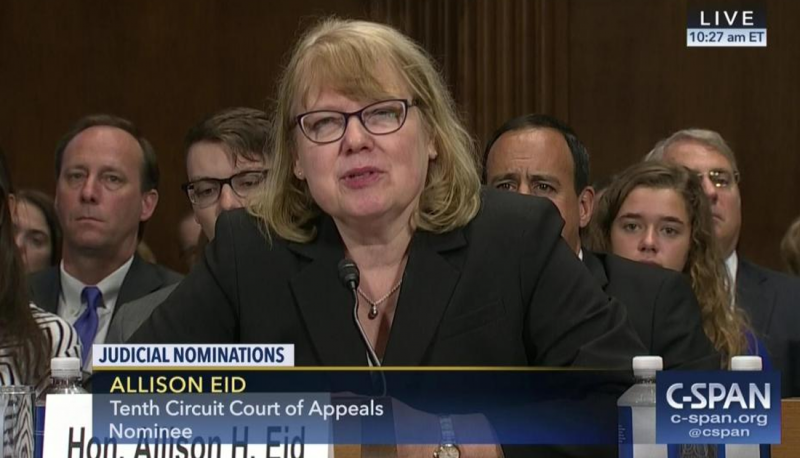 In November 2018, Trump judge Allison Eid of the Tenth Circuit was the dissenting vote in a 2-1 ruling concluding that an individual’s Fourth Amendment rights were clearly violated and any evidence seized as a result of that violation must be excluded. Eid acknowledged that the Fourth Amendment was violated, but voted to give the government another chance to justify using the evidence.

In United States v. Shrum, Walt Shrum’s wife died unexpectedly from a prescription medication overdose in their home. Shrum went to the hospital with his wife after attempting to perform CPR on her and agreed to have an autopsy performed, but the Kingman County police barred Shrum from re-entering his home until the autopsy was completed. At one point, he tried to re-enter to check on his dogs and use the bathroom, but the police refused. Shrum later signed a consent form permitting the police to enter the home for the limited purpose of retrieving his wife’s medication, which would be needed by the coroner. While in the home, the investigator took more than 50 pictures, allegedly to document what was taken and confirm that nothing else was removed, and later saw that one picture showed ammunition in Shrum’s bedroom closet. After then discovering that Shrum had previously been convicted of a felony, the investigator obtained a search warrant and seized from the home two guns, ammunition and suspected methamphetamines.

The majority agreed with Shrum. They explained that the initial securing of Shrum’s home on the morning of his wife’s death constituted an unreasonable seizure in violation of the Fourth Amendment, and that the evidence discovered from the illegal seizure was tainted and should have been disregarded. Under the Fourth Amendment, a person has the right to return to his own home and be free from unreasonable government intrusion unless there is probable cause to believe that the home contains evidence of a serious crime. At the time Shrum was barred from his home, the investigator had no knowledge of any facts suggesting Shrum or his deceased wife were engaged in criminal activity in their home. The investigator claimed authority over the home and barred him from re-entry, with Shrum not having a choice in the matter. The majority explained that the seizure, which lasted eighteen hours, was “the commencement of a fishing expedition to see what sort and how big of fish the police might catch.” And, “nothing in the record remotely suggests law enforcement obtained” the evidence against Shrum from a source “wholly separate” from the illegal seizure.

Eid agreed that Shrum’s home was unreasonably seized, but disagreed with the majority’s conclusion that the evidence was tainted. She believed that the district court should be left to decide whether the evidence seized was tainted and should be purged in light of the later limited consent and search warrant. The majority explained that the proceedings in the lower court “resulted in a record of amply sufficient detail and depth.”