Demonstrators Send McCain Message That He Was “Too Little, Too Late” In Denouncing Trump

When Arizona Senator John McCain and Representative Ann Kirkpatrick took the stage on Monday night for their one and only debate, theirs weren’t the only voices heard at PBS studios in Phoenix.

People For the American Way joined Planned Parenthood, ProgressNow, and other Arizona activists to send a clear message to Senator McCain: he jumped the Trump ship too little, too late. 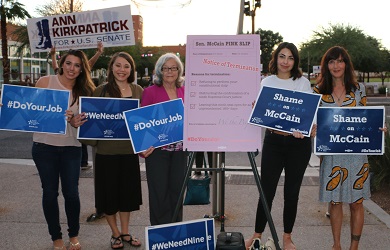 In her remarks outside of the debate, Stacey Champion, PFAW’s Arizona Campaign Organizer, pointed out just how dedicated to the Trump cause Senator McCain has been:

For over a year, Donald Trump has pushed racist, sexist, and bigoted attacks against far too many Americans — and through it all, Sen. McCain continued to pledge to vote for him. He’s made clear he stands with Trump and the extreme Republican Party, not Arizonans.

Senator McCain has been just as dedicated to blocking Supreme Court nominee Merrick Garland, and for the same disingenuous political reasons. As we noted on Tuesday, McCain’s “straight talk” on the Supreme Court exposes that his obstruction has never been about “the integrity of the Court” as he claimed, but rather about his desire to play politics with judicial nominations.

Shame on Senator McCain for not doing his job, and for waiting far too long to dump Trump. 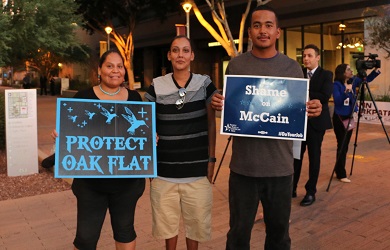 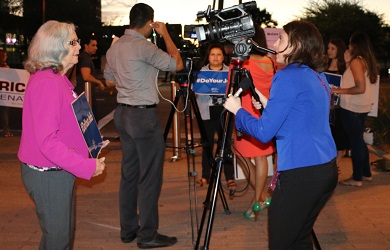