In the Supreme Court Vacancy Fight, Our Future is at Stake 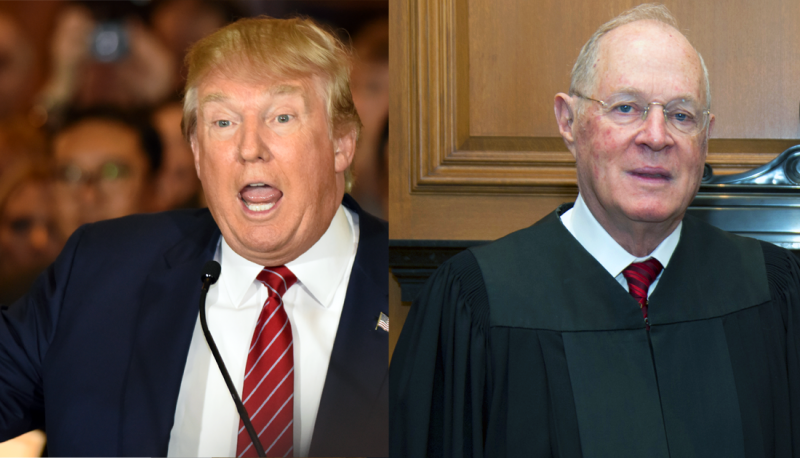 Last week, Justice Anthony Kennedy announced his retirement from the Supreme Court, giving Donald Trump the chance to nominate another justice to a lifetime seat on the bench and, potentially, to reshape the Court for a generation.

Since Sandra Day O’Conner left the Court in 2003, Kennedy has widely been considered the swing vote — usually joining with the Court’s four extremely conservative members in cases that broke on ideological lines, but occasionally siding with the moderates on key issues. Over the last 15 years, he provided the fifth and decisive vote on some of the most critical rulings that safeguarded justice and civil rights in our country, including women’s reproductive rights and marriage equality. If Trump is allowed to replace Kennedy with a nominee in the mold of his last pick, Neil Gorsuch, the effect will wreak havoc on our country for generations to come.

Trump has made no bones about who he wants to appoint. During the 2016 election, he won the support of the Religious Right by promising that he’d impose an anti-choice litmus test on all his nominees. In fact, he pledged to go a step further, and to limit his choices to potential nominees preselected by two of the most extreme right-wing advocacy organizations in Washington, the Federalist Society and the Heritage Foundation. Since his election, he’s made clear that he intends to keep that promise. Neil Gorsuch, Trump’s first pick for the Supreme Court, is exhibit A, not just routinely siding with the other conservatives on the court, but occasionally indicating in written concurrences that he’d go much further to the right given the opportunity. Trump’s nominees to the lower courts have been a rogues gallery of right-wing activists, virtually all of whom have spent their careers pushing an extreme ideological agenda in the law.

Should Kennedy be replaced by another jurist like Gorsuch — and every single jurist on Trump’s shortlist meets that test — the results would be catastrophic.

Perhaps most obviously, Kennedy, despite having a mixed record on issues related to women’s reproductive choice, in both Whole Women’s Health and Casey, Kennedy provided the fifth and decisive vote that upheld Roe v. Wade and safeguarded women’s bodily autonomy. But Trump has promised time and again that he would appoint anti-choice judges who will take every opportunity to severely limit abortion access — and overturn Roe. Cases challenging Roe are already in the pipeline. As CNN legal analyst Jeffrey Toobin made clear, should one of Trump’s extreme nominees be confirmed, “abortion will be illegal in a significant part of the United States in 18 months. There is just no doubt about that.”

Similarly, Kennedy’s vote was critical in vindicating the right of same-sex couples to be treated equally under the law. Kennedy’s rulings in Obergefell and Windsor secured the right to same-sex marriage, but there’s ample reason to fear for the future of marriage equality and LGBTQ equality more broadly, if any one of the judges on Trump’s short list were to be confirmed. While many Americans might think the question of same-sex marriage is settled, the Religious Right has been working to overturn that decision from the moment it was handed down. Indeed, the Heritage Foundation, which has already approved all the names on Trump’s list, has been at the forefront of charting the legal strategy to turn back the clock on marriage equality. Without Kennedy on the Court, there simply aren’t five votes in favor of recognizing this fundamental constitutional right.

And while choice and marriage equality may be the two issues where replacing Kennedy with a narrow-minded elitist from Trump’s shortlist would most obviously endanger our rights, on other issues Kennedy provided the fifth vote to moderates on the Court who stopped the four most extreme Justices from pushing the law even further to the right.

In Massachusetts v. Environmental Protection Agency, Kennedy’s vote prevented the Court from ruling that the EPA had no authority to regulate greenhouse gasses. In Texas Department of Housing and Community Affairs Kennedy stopped the Court from eliminating the use of the disparate impact test under the Fair Housing Act, one of the most important tools we have to stop housing discrimination. In the Boumediene decision, Kennedy protected the right of prisoners in Guantanamo Bay to file habeas corpus claims in federal court. In Brown v. Plata, Kennedy’s vote protected the right of prisoners not to be housed in overcrowded prisons that provided inadequate medical treatment to prisoners and produced “needless suffering and death.”

Without Kennedy on the Court, each and every one of those decisions, and many more, are in grave danger.

Yet those cases represent only the tip of the iceberg. We know that right-wing litigators have been dissuaded against bringing cases to the Supreme Court on which they knew they couldn’t get Justice Kennedy’s vote. Now, should the Court’s balance shift sharply to the right, the floodgates would open. Instead of needing to win the vote of Justice Kennedy, right-wing activists would merely need to secure the support of Chief Justice Roberts — a frightening prospect on issues ranging from Civil Rights to sex discrimination.

Just as important, replacing Kennedy with another justice in the mold of Gorsuch would harden the Court’s far-right bloc, making it harder to move towards a day when we can overturn destructive and dangerous rulings that are already having a brutal impact on our country, from Citizens United to Janus to Shelby County.

The fate of our future and the future of generations to come is in grave danger. We need a Supreme Court that will defend the Constitution’s guarantee of equality and for justice for all and justices who understand the impact of the law on all Americans. That’s not what we would get from any of Trump’s nominees. We need to make clear that we won’t accept anyone who will protect corporations and the wealthy over ordinary Americans or roll back the clock on rulings that protect women, workers, the LGBTQ community and people of color.

Our future depends on it.