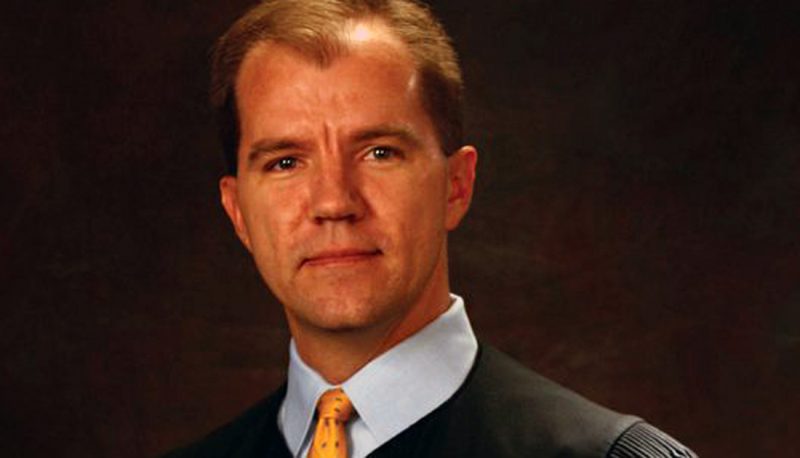 On October 3, President Trump nominated Don Willett to a seat on the U.S. Court of Appeals for the Fifth Circuit. The Senate Judiciary Committee held Willett’s hearing on November 15. People For the American Way sent the following letter to committee members to express our opposition to the Willett nomination. You can download this letter here.

On behalf of our hundreds of thousands of members across the United States, People For the American Way opposes the nomination of Texas Supreme Court Justice Don Willett to the U.S. Court of Appeals for the Fifth Circuit. His record indicates a dangerously reactionary jurisprudence that would decimate the ability of the American people to impose reasonable limits on the power of large corporations. It also reflects a willingness to let his personal views shape his judicial decisions.

In the 2015 case of Patel v. Texas Department of Licensing and Regulation, the Texas Supreme Court struck down the state’s training requirements for licensure as a commercial eyebrow threader. Willett wrote a concurring opinion, contrasting state licensing requirements with “the American Dream and the unalienable human right to pursue happiness without curtsying to government on bended knee.” He argued that a commercial regulation affecting someone’s right to pursue a lawful calling should be presumed unconstitutional under the U.S. and Texas constitutions unless the government can justify it. Willett would allow judges to strike down regulations if they consider them “preposterous.”

This is a sharp departure from basic constitutional doctrine and raises the specter of the Lochner era, when Supreme Court justices imposed their economic views on society as constitutional requirements. For instance, in the Lochner case itself, the Court struck down a law setting a limit for bakeries on how many hours per day and week their hired bakers could work. Market forces had led to bakers being grossly overworked. But the Court ruled that the law protecting bakers violated the constitutional right of employers and employees to bargain with each other to establish an employment contract. By constitutionalizing this economic theory, the Court blocked people from acting through their government to protect themselves from the dangerous and sometimes fatal excesses of the free market. The Court eventually recognized its mistake and, by the 1940s, had thoroughly repudiated it. Willett would bring that view of the Constitution back to the federal judiciary at an especially inauspicious time and would accelerate our rising income inequality and falling public confidence in democracy.

Moreover, it isn’t small businesspeople or their employees who would benefit from a constitutional prohibition against ordinary business regulations. To the contrary, it would benefit those whose power over everyone else is limited only by those economic regulations. Our history shows that companies do not protect their workers and ensure their products are safe out of the goodness of their hearts. In fact, they often do just the opposite unless there are regulations to prevent that.

Indeed it is through our government that people who are individually powerless against an enormous corporation can establish “rules of the road” that rein in corporate power and protect all of us. It is the very essence of self-government.

Willett’s hostility to this basic function of government appeared in a memo he wrote in 1998, when he was part of then-Gov. George W. Bush’s administration. He worked to dramatically revise a proclamation Bush was planning to issue honoring the Texas Federation of Business and Professional Women. Among other complaints, he breezily dismissed improving women’s working conditions as simply “more government” and therefore bad.

But his memo did more than reject the idea that the people can use government to remedy the harms that unfettered capitalism does to the less powerful members of society. As reported in the Austin American-Statesman in July of 2000, Willett repudiated the reality of workplace obstacles holding women back, as if they simply didn’t exist:

I resist the proclamation’s talk of “glass ceilings,” pay equity (an allegation that some studies debunk), the need to place kids in the care of rented strangers, sexual discrimination/harassment, and the need generally for better “working conditions” for women (read: more government).

How could a federal circuit court judge issue sound rulings on Title VII sex discrimination cases when he “resists” the reality of how that discrimination manifests itself?

Justice Willett has at times made it abundantly clear just how much his personal policy preferences affect his interpretations of the law. One glaring example was in 2008’s Coastal Oil & Gas v. Garza Energy Trust, a case about fracking, where his concurrence sounded more like a legislator’s floor speech than a judge’s legal analysis:

At a time of insatiable appetite for energy and harder-to-reach deposits–iron truths that contribute to $ 145 a barrel crude and $ 4 a gallon gasoline–Texas common law should not give traction to an action rooted in abstraction. Our fast-growing State confronts fast-growing energy needs, and Texas can ill afford its finite resources, or its law, to remain stuck in the ground. The Court today averts an improvident decision that, in terms of its real-world impact, would have been a legal dry hole, juris-imprudence that turned booms into busts and torrents into trickles. Scarcity exists, but above-ground supply obstacles also exist, and this Court shouldn’t be one of them.

I join today’s no-liability result and suggest another reason for [it]: Open-ended liability threatens to inflict grave and unmitigable harm, ensuring that much of our State’s undeveloped energy supplies would stay that way–undeveloped. Texas oil and gas law favors drilling wells, not drilling consumers. Amid soaring demand and sagging supply, Texas common law must accommodate cutting-edge technologies able to extract untold reserves from unconventional fields.

Parties litigating against a fracking plan in the Fifth Circuit could reasonably doubt getting a fair day in court before a panel with Judge Willett. The public would have similar doubts, which would serve only to erode confidence in our nation’s federal judiciary. And there is no reason to think this flaw would be limited to the one issue of fracking.

Indeed, it isn’t. Less than four months ago, he used his position on the bench to do harm to married couples of the same sex, in flagrant violation of unambiguous Supreme Court precedent requiring states to give equal “rights, benefits, and responsibilities” to all married couples, regardless of the sex of the spouses. Sadly, the entire Texas Supreme Court was in agreement on defying Obergefell (perhaps not surprising for a deeply conservative state whose justices are elected in partisan elections).

In Pidgeon v. Turner, Willett and his colleagues addressed the constitutionality of Houston’s law giving city employees spousal benefits only for opposite-sex spouses. They ruled that while Obergefell required states to license marriages equally, it didn’t address equality of benefits. To justify their bizarre conclusion, Willett and the others posited that this was just one among many questions the marriage equality ruling didn’t address:

Already, the [U.S.] Supreme Court has taken one opportunity to address Obergefell’s impact on an issue it did not address in Obergefell, and there will undoubtedly be others. See Pavan [v. Smith and the pending Masterpiece Cakeshop case].

Pavan v. Smith was a summary reversal of an Arkansas court’s ruling upholding discriminatory rules for listing married parents on a birth certificate if they are of the same sex. No oral arguments were needed because Obergefell was unambiguous. But Willett used the U.S. Supreme Court’s forceful repudiation of another court’s defiance of the rule of law as encouragement for more defiance.

And Masterpiece Cakeshop addresses legal issues not at all related to government recognition of marriages. It involves businesses claiming a First Amendment right not to comply with anti-discrimination laws protecting LGBT people from discrimination.

It is one thing for political figures to conflate state recognition of marriage with a private business’s compliance with anti-discrimination laws. But a judge who cannot tell the difference does not have the qualifications to sit on the Fifth Circuit. And if Willett does recognize the difference, then his decision to join the Texas marriage benefits opinion indicates a dangerous willingness to subordinate the rule of law to his personal feelings.

For all these reasons, we urge you to oppose the nomination.