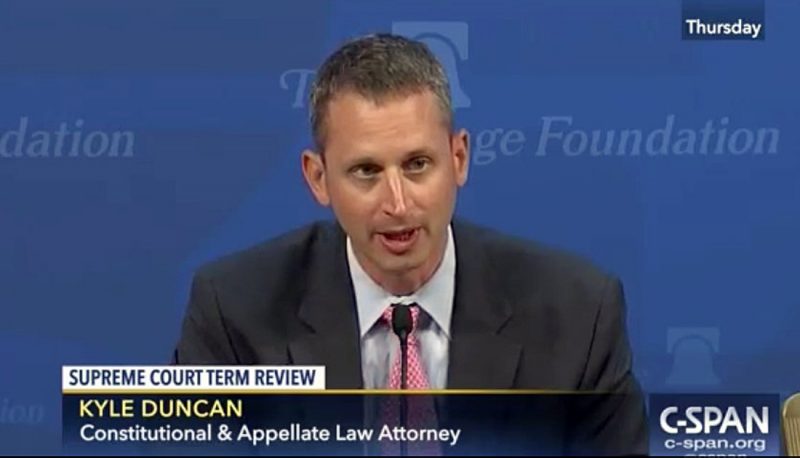 Louisiana’s Kyle Duncan, nominee to the Fifth Circuit Court of Appeals, has a deeply disturbing record demonstrating why he should not be confirmed. Adding a unique perspective to that record is a newly published op-ed in the New York Times.

“Kyle Duncan Is Unfit to Be a Judge” gives the perspective of Laverne Thompson, widow of John “J.T.” Thompson:

If you want to understand how Kyle Duncan, President Trump’s nominee to the United States Court of Appeals for the Fifth Circuit, would serve in that role, consider how he behaved toward my late husband, John Thompson.

Thompson spent 18 years in prison (14 on death row) for a murder that prosecutors knew he hadn’t committed.

How did they know? Because they had evidence proving his innocence, but they destroyed it instead of turning it over to lawyers as required by law (to say nothing of just plain decency).

When the truth was at last discovered, Thompson was freed. He joined a list of innocent people who prosecutors in that same office had sent to jail after destroying evidence showing their innocence.

Thompson sued the prosecutors for the monstrous thing they had done to him. They needed to be held accountable.

And that’s where Kyle Duncan comes in. Thompson’s widow writes:

While representing the prosecutors when the case went to the Supreme Court, Mr. Duncan was serving as what he later called “solicitor general” of Louisiana, a position that does not exist. He devised the argument that, although the district attorney had withheld evidence in many cases involving innocent men, there was no need to train lawyers in his office because they would have learned about their obligation in law school.

The Supreme Court sided with the prosecutors, 5 to 4. Mr. Duncan received the Louisiana District Attorneys Association award for outstanding service for his work on the case.

Mr. Duncan, I’m sure, represented his client — J.T. would always say that everyone deserves a lawyer. But the positions Mr. Duncan argued and won are not the positions of a man who can suddenly become a fair referee in the dozens of similar cases that would come before him as a judge. Mr. Duncan’s confirmation could serve as a declaration to prosecutors that winning at all costs remains, as it has been far too often in the past, the path to success.

My husband died this past October, much too soon. He was 55. No prosecutors were punished for their role in putting him in prison. Meanwhile, Mr. Duncan is being considered for a promotion.

On January 18, every Republican on the Senate Judiciary Committee voted to advance Duncan’s nomination to the full Senate. Before his floor vote, every senator should read about the entirety of Duncan’s record.

In a 51-49 Senate, it only takes two Republicans to do the right thing to prevent the wrong thing from happening.