Shortly after President Donald Trump announced last night that Judge Neil Gorsuch would be his nominee to the Supreme Court, People For the American Way and allies rallied in front of the Supreme Court in opposition to the nomination of a right-wing ideologue whose record does not inspire confidence in his ability to put the Constitution above his own political beliefs. 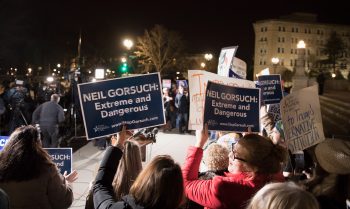 Leaders and advocates representing a wide range of issues—from civil rights and LGBTQ rights to women’s equality and workers’ rights—came together to speak out in opposition to Gorsuch’s alarming record, which shows that he has consistently favored the interests of corporations at the expense of the rights of everyday Americans. 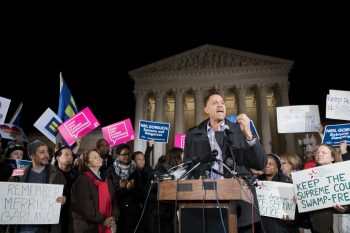 People For the American Way Director of Outreach and Public Engagement Diallo Brooks (above) emphasized the need for a Supreme Court justice who understands that the Constitution is meant to protect everyone, not just the powerful:

Americans know that Supreme Court justices need to be fair-minded and independent—especially with President Trump at the helm. Senators should oppose this nomination and insist on a nominee who has shown that he or she respects the constitutional values of equal rights and justice for all.