PFAW Joins Coalition of Activists at the Capitol to Support Dr. Blasey Ford 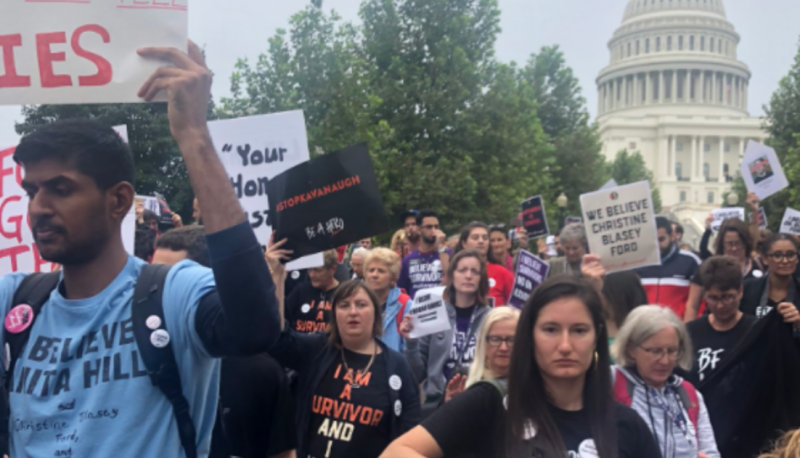 Last week, as most of the country tuned in to watch Dr. Christine Blasey Ford as she testified to her allegations against Trump’s Supreme Court nominee Brett Kavanaugh, representatives of People For the American Way went to Capitol Hill to protest the advancement of Kavanaugh through the Senate Judiciary Committee. As Kavanaugh faces multiple allegations of sexual assault, PFAW is among the many organizations and activists who are outraged by the prospect of Kavanaugh serving a lifetime appointment on the Supreme Court.

On Thursday, September 27, protestors met briefly in the Hart Senate Office Building before splitting up into groups to speak to each senator on the Judiciary Committee who was likely to vote for Kavanaugh. The groups then reconvened in the Hart atrium and quietly gathered in a large circle as Dr. Blasey Ford began her testimony. Many demonstrators gathered around their phones to listen to Dr. Blasey Ford’s statement, while others told their own stories of assault or stood silently with their fists raised in the air in a showing of solidarity.

After Dr. Blasey Ford’s testimony, protestors began to march from the Senate to the reflecting pool outside the Capitol. Hundreds joined the march and then gathered to hear speeches from the organizers of the Women’s March as they explained the importance of this Supreme Court seat and why the accusations of sexual assault make Judge Kavanaugh unfit for the Court. The demonstrators then marched to the Supreme Court before finally returning to the Hart atrium to continue their protest.

Although protestors were quickly asked to leave the atrium due to a spirited call and response led by Fatima Goss Graves of the National Women’s Law Center, the group reconvened outside where they heard more speeches from several prominent figures in women’s rights activism, including Dolores Huerta, an American labor leader and co-founder of the National Farm Workers Association who serves on the PFAW board.

“We are sick and tired of women being treated as if we are just sex objects.” -Dolores Huerta #IBelieveChristineBlaseyFord #KavanaughHearings #BelieveSurvivors #StopKavanaugh pic.twitter.com/yWQXB3Fw4u

The following day began on a somber note as many GOP senators on the Judiciary Committee had voiced their commitment to vote for Kavanaugh’s advancement to the senate floor. Again, most protestors began gathering in the atrium of the Hart Senate Office Building, while some went to offices to find and talk to the senators. Constituents of Senator Susan Collins, R-Maine, a possible swing vote on the Kavanaugh nomination, also gathered to collectively meet with the senator and ask that she vote no if Kavanaugh advances to the Senate floor. Meanwhile, three of the senators who walked out of the committee vote—Senator Mazie Hirono, D-Hawaii, Senator Kamala Harris, D-Calif., and Senator Richard Blumenthal, D-Conn.—came to the atrium to make statements against their colleagues who had chosen to vote Kavanaugh out of committee.

Thank you @SenKamalaHarris for joining our protest today. We know you will keep fighting for women. #IBelieveChristineBlaseyFord #StopKavanaugh #Kavanaugh #BelieveSurvivors pic.twitter.com/809TS3Pv6H

Protestors then marched to the Supreme Court and gathered for speeches from Senators Harris, Hirono, and Blumenthal, and Senator Kirsten Gillibrand, D-N.Y. and Senator Smith, who all spoke about why it remains important for everyone to keep calling their senators to demand that Kavanaugh be stopped. Afterwards, several activists and leaders of civil rights organizations also stood up to speak, including Marge Baker from People For the American Way who stated that senators who vote for Kavanaugh “are insulting and demeaning every woman and every survivor of sexual assault.” 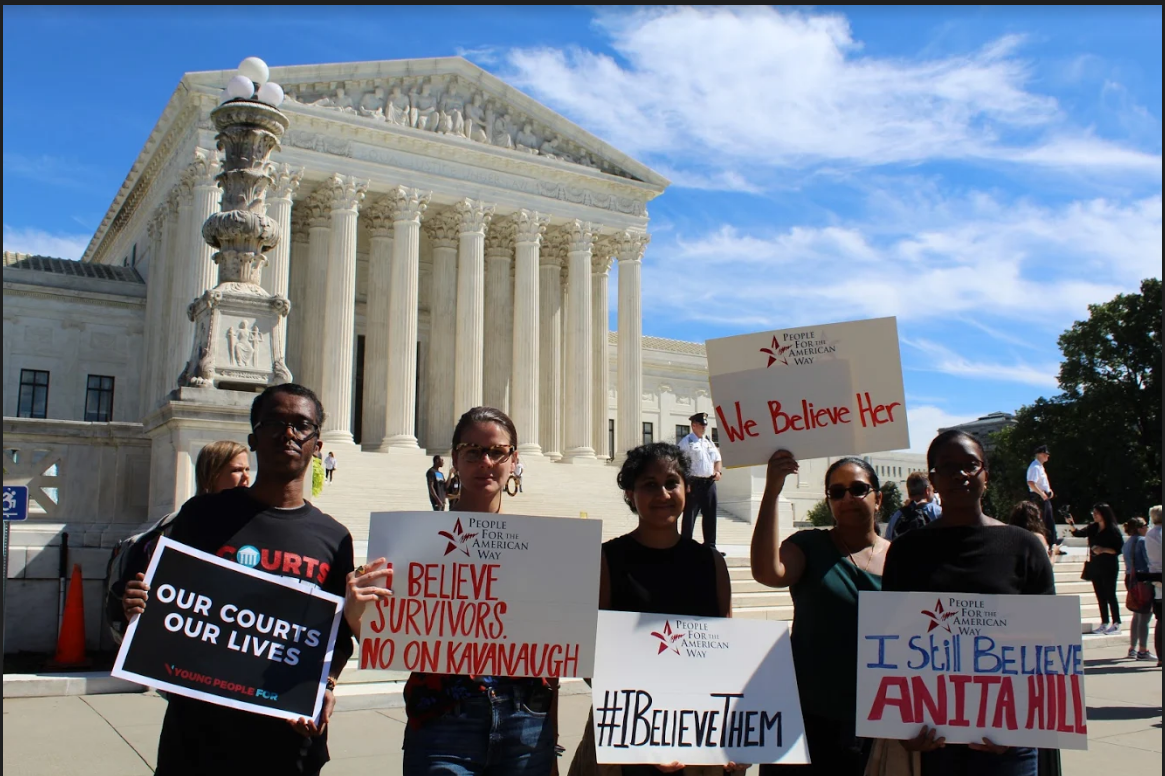 Meanwhile, a coalition of activists also delivered a petition with over 1.5 million signatures to the offices of Chairman Chuck Grassley, R-Iowa, Senator Jeff Flake, R-Ariz., Ranking Member Dianne Feinstein, D-Calif., and Senator Kamala Harris, D-Calif., in advance of the committee vote. Powerful statements and stories were shared during this delivery from survivors, advocates, civil rights activists and more. 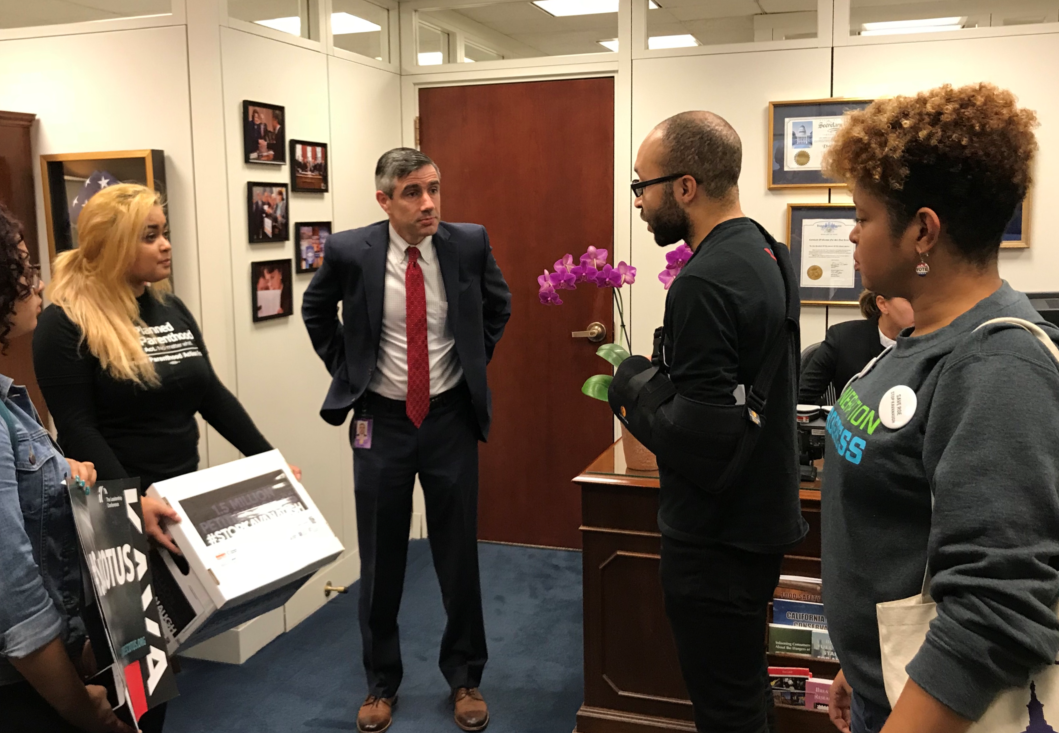 The afternoon continued with protests in the form of activists splitting up and continuing to visit Chairman Grassley’s and Senator Collins’ offices, among others. Constituents of Senator Collins also met in the atrium to discuss their own stories of sexual assault and explain why they wanted their senator to back Senator Flake in his insistence on an FBI investigation. The day ended in a dramatic banner drop from the Hart’s fourth floor balcony. Three groups of activists dropped signs indicating their support for Dr. Blasey Ford as protestors on the ground chanted “we believe survivors.”