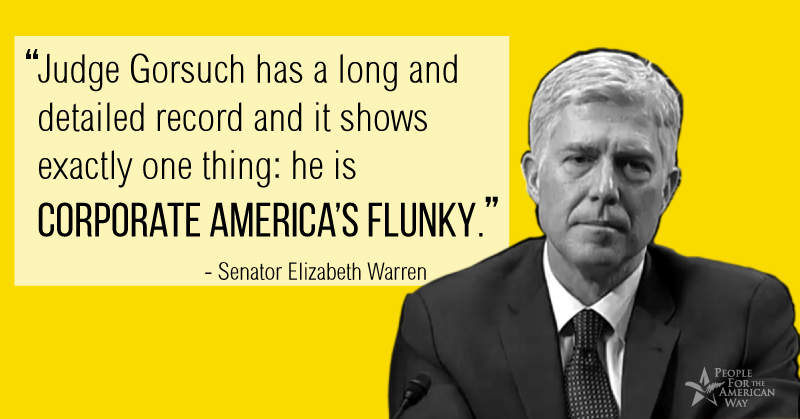 Last night we hosted a member telebriefing with Senator Elizabeth Warren along with our own Vice President Marge Baker, Senior Fellow Elliot Mincberg, and Communications Director Drew Courtney to discuss the first day of Judge Neil Gorsuch’s Senate confirmation hearing. After a day of rigorous questions from Democratic senators and softballs from Republicans, Sen. Warren joined us to discuss the hearing so far.

Senator Warren broke down what the hearing means for money in politics issues and discussed the ways in which major corporations would benefit from Gorsuch’s confirmation. She reminded us that during the campaign cycle, Donald Trump promised to help out corporations and big donors—leading, in part, to his nomination of Gorsuch. Warren said:

“Judge Gorsuch has a long and detailed record and it shows exactly one thing: he is corporate America’s flunky.”

From dismissing the rights of women to shrugging off consumer protections, Warren noted, Gorsuch has consistently championed the interests of corporations. “Gorsuch is not a run-of-the-mill conservative judge,” Warren stressed. “He has been even more extreme than his conservative colleagues on the bench.” Warren emphasized that she’s fighting back against corporate control of the Supreme Court, and that she wants to see a Court that cares about the lives of human beings.

Looking at the major takeaways of the hearing yesterday, Mincberg highlighted excellent questions from Democratic senators about the Hobby Lobby case as well as the case where Gorsuch wrote a dissent against a trucker who nearly froze to death on the job. He went on to say that a major issue with the hearing so far has been Gorsuch’s utter reluctance to answer any questions about his views on the law, even when there’s a history of other nominees answering them.

Baker underscored that it’s time for activists to weigh in: We need the senators who haven’t made up their minds to hear our strident opposition to the nominee. She said that we must make our voices heard, whether through social media, calls, letters to the editor, or visits to our senators’ in-state offices. And if Gorsuch isn’t even going to answer senators’ legitimate questions about his ideology, then he cannot be confirmed.

Click here to read our report on the real people who were harmed by Judge Gorsuch.

Listen to the full call below: