Separation of Church and State Must Be Protected 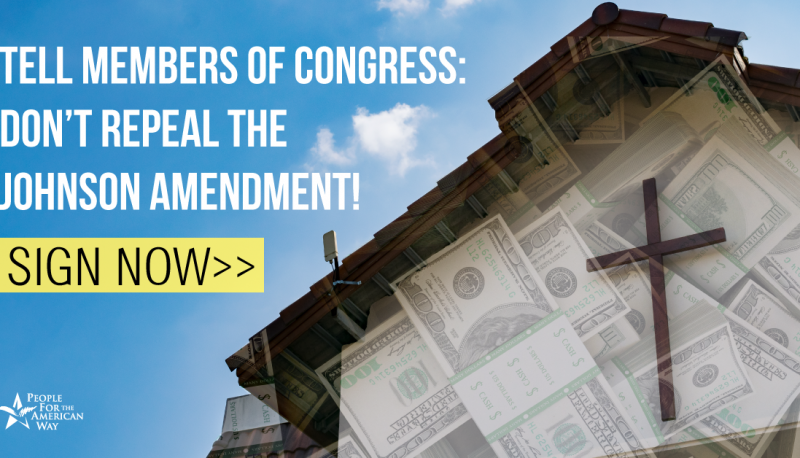 Just two weeks after taking office in January, President Trump used the National Prayer Breakfast to reiterate his intention to “destroy” the Johnson Amendment, which currently keeps politics from overtaking the pulpit by prohibiting churches (and other nonprofits) from getting directly involved with political campaigns while still maintaining critical free speech rights. Trump followed that up in May when he issued a “religious liberty” executive order that, in part, attempts to erode the power of the Johnson Amendment. Now the GOP Congress is getting in on the action—not only are we facing Johnson repeal bills, but they’re also trying to undermine the Johnson Amendment through the appropriations process.

The Johnson Amendment is an important safeguard for not only the separation of church and state but also against an even greater influx of big money in politics. People For the American Way and PFAW’s African American Ministers In Action oppose its repeal, including through appropriations riders that threaten our rights, our health, and our democracy.

PFAW and AAMIA were among 50 organizations that recently signed a letter opposing this latest abuse of the appropriations process:

Section 116 would make it very difficult for the IRS to investigate claims that churches have violated the law by requiring consent from the IRS Commissioner for each investigation and notification to two committees in Congress before such investigations commence. The first requirement would slow down, if not functionally halt, the pursuit of 501(c)(3) violations, while the second would only further politicize these investigations.

Additionally, although the current law applies to all tax-exempt nonprofit organizations, Section 116 would apply only to houses of worship. By giving houses of worship special treatment in the enforcement of IRS restrictions on intervention in political campaigns, the amendment raises serious concerns under the Establishment Clause of the First Amendment to the U.S. Constitution and undermines religious freedom.

PFAW, AAMIA, Americans United for Separation of Church and State, and the other organizations that signed the recent letter made clear once again what the Johnson Amendment does and does not do, and how important it is to defend this long-standing precedent:

The Johnson Amendment protects the integrity of tax-exempt organizations, including houses of worship, by ensuring they do not endorse or oppose candidates. Weakening current law would allow politicians and others seeking political power to pressure churches for endorsements, dividing congregations and opening them up to the flow of secret money. Americans do not want our charities and houses of worship to be torn apart by partisan campaign politics. We must keep this valuable safeguard that protects our houses of worship and our political process.

Under the current law, which has been in place for the last six decades, houses of worship have maintained robust free speech rights and can speak out on any political and social issues that they see as important. They currently can engage in public debate on any issue, host candidate forums, hold voter registration drives, encourage people to vote, help transport people to the polls and even, with a few boundaries, lobby on specific legislation and invite candidates to speak. They simply cannot endorse or oppose candidates and maintain their special tax-exempt status.

PFAW is an ardent defender of religious liberty and will continue to support the Johnson Amendment—please join us in telling Congress to keep important protections between church and state.