The Pew and the Bench: A Faith Summit on the Federal Judiciary

Other panelists included: Nancy Zirkin from the Leadership Conference on civil rights, Jim Wimkler from the general board of the United Methodist Church, Holly Hollman from the general counsel of the Baptist joint committee, Sammie Moshenberg from the National Council of Jewish Women, Rick Foltin from the American Jewish Committee and Mark Pelavin from the Religious Action Center.

Panelists briefly discussed how their organizations reach various faith communities, and reiterated the importance of having strong judicial candidates for these lifetime position. Joi summarized the work that the African American Religious Affairs department is accomplishing with regards to judicial nominations.

The ministers programs were founded to act out of the prophetic vein of the Black Church. So I will say, that we do not claim to speak on behalf of the entire black church, because it is not a homogeneous group. We particularly advocate and represent the marginalized, disenfranchised, and outcast. So like the prophet Rev. Dr. Martin Luther King Jr., we advocate with a liberal reading of the Bible in one hand and the Constitution in the other. That’s what the prophetic black church has done throughout history. We rejected the “slaves obey your masters” rhetoric of the New Testament, while embracing the nation’s sacred documents that purport to stand for liberty and justice for all. And I want to underscore the word all. Because the truly prophetic black church is inclusive in its advocacy. That’s why MLK was an integrationist. That’s why as an organization we work on fair public education for all of our children, fair comprehensive immigration reform, and LGBT rights, because injustice anywhere is a threat to justice everywhere. 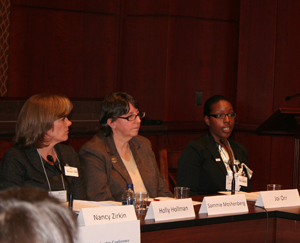