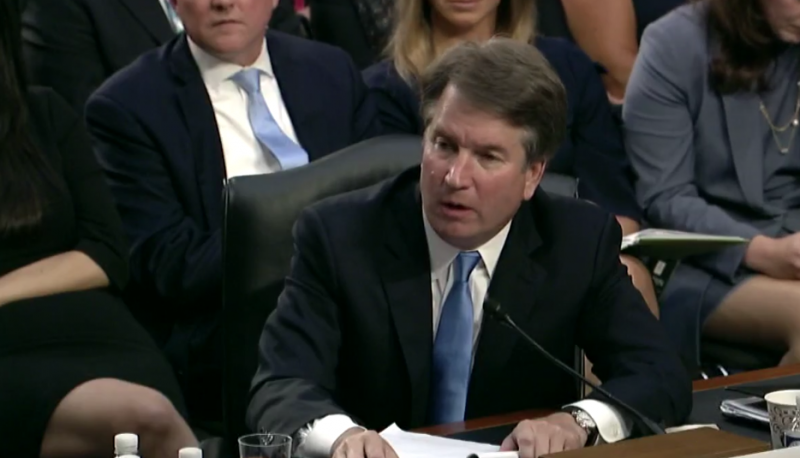 In his testimony before the Senate Judiciary Committee on Sept. 6, Supreme Court nominee Brett Kavanaugh tried to explain away a March 24, 2003 email he wrote while in the White House about whether Roe v. Wade is “settled law.” In the email, made public for the first time by The New York Times on Sept. 6, Kavanaugh suggested deleting a line from a draft editorial that said that “it is widely accepted by legal scholars across the board that Roe v. Wade and its progeny are the settled law of the land.” Kavanaugh’s email stated that “I am not sure that all legal scholars refer to Roe as the settled law of the land at the Supreme Court level since Court can always overrule its precedent, and three current Justices on the Court would do so.” At the hearing, he explained that the email reflected his opinion about whether legal scholars thought Roe was settled law, not his own views on that subject.

While it’s hard to read his suggested deletion of that sentence as anything other than his belief that Roe is not settled law, his testimony misses the point. His 2003 email makes clear what many pro-choice (and even some anti-choice) advocates have been saying: whether or not a decision is considered “settled law,” the Supreme Court “can always overrule its precedent.” Last year, despite their recent pledges to the Senate Judiciary Committee to respect precedent, Justices Gorsuch and Alito did exactly that and voted to overrule the long standing precedent of Abood v. Detroit Bd. Of Educ., which was decided four years after Roe. With not just three but four justices on the Court now prepared to overrule Roe, Kavanaugh’s record (including his praise of the Rehnquist dissent in Roe) suggests he is all too likely to be the fifth. And as reflected in his dissenting opinion trying to prevent a young woman from choosing an abortion in the Garza case, his vote on the Court would be likely to totally eviscerate the rights of millions of women to choose, regardless of whether Roe is formally overruled.