In the News: PFAW Experts on Trump Impeachment 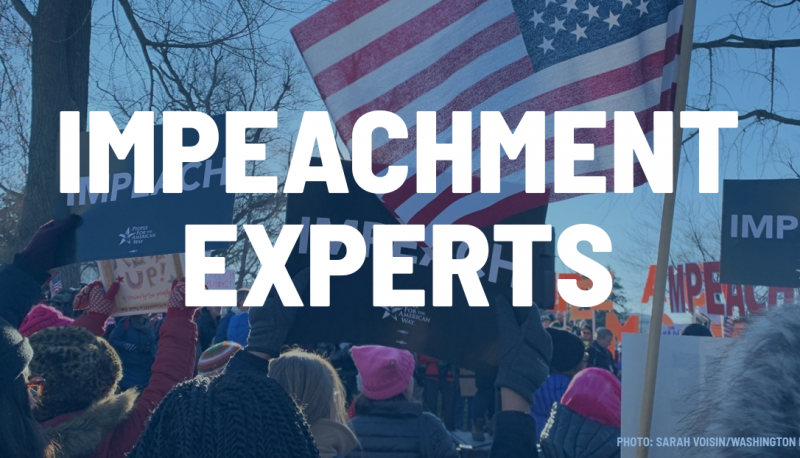 When Speaker Nancy Pelosi introduced a formal impeachment inquiry into Trump’s abuses of power and corruption of justice, PFAW announced its support of the inquiry. In the months that have followed, PFAW experts have spoken with major news outlets, including MSNBC, The Associated Press, and the Washington Post about holding the Trump White House accountable and protecting democracy from right-wing extremists.

PFAW experts have spoken with major news outlets, including MSNBC, The Associated Press, and the Washington Post about holding the Trump White House accountable and protecting democracy from right-wing extremists.

Washington Post: As Congress debates impeachment inside, protesters outside the Capitol tell lawmakers: ‘Nobody is above the law,’ December 18, 2019

The Philadelphia Inquirer: On frigid Capitol Hill, Trump’s impeachment goes down just like the Founders drew it up, December 18, 2019

TIME: As House Judiciary Takes Control of Impeachment Hearings, All Eyes Are on Jerry Nadler, December 3, 2019

The Hill: Mass mobilization could tip the scales on impeachment, November 26, 2019

Law & Crime Network: ‘He Should Resign or Be Impeached’: AG Barr Slammed on Several Fronts After Explosive Sondland Testimony, November 20, 2019

TIME: Inside the White House’s Struggle to Address Impeachment, October 30, 2019

Support the Fight!
Stand with us against Trump and right-wing extremism!

ALL donations 3X-MATCHED by 12/31 to save our democracy!

Please make your end-of-year donation to preserve our democracy ... to defend the fundamental rights of all ... to correct the dangerous course our country is on under Trump and ensure a new path that rejects hate in favor of the values that unite us and make America truly great.

Support the work of People For the American Way as we head into this critical New Year and your donation will be TRIPLE MATCHED by a group of our dedicated donors.

Your year-end donation will be 3X-MATCHED to save our democracy!