As the dust settles from many important elections around the country yesterday, we have some great news to report.

In the race PFAW put our focus on in Virginia, we won! Progressive Jeremy McPike captured the Senate seat. I’m happy to report that PFAW’s work in this election on the air and on the ground — which Virginia and regional PFAW members supported with their volunteer time and hundreds of PFAW members from around the country stepped up to support with donations — was effective.

In addition to the victory in this race, we made important inroads into the Latino community that will be critical in 2016, when Virginia is expected to be perhaps THE most important swing state and the Latino vote could be THE deciding factor. We were proud to produce the first ad ever to use Donald Trump’s hateful immigrant-bashing rhetoric as a vote motivator, rightly tying that bigotry to the Republican brand. 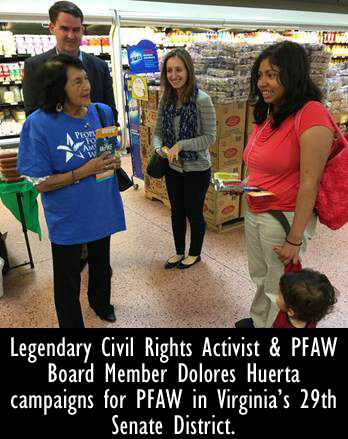 In other great news from Virginia, a radical anti-gay and anti-immigrant county supervisor in northern Virginia, who PFAW’s Right Wing Watch has long tracked, lost his seat. As Right Wing Watch has reported, Republican Eugene Delgaudio has said the “homosexual lobby” wants to make it legal to “rape and murder young boys” and has warned that allowing LGBT people to adopt would lead to gay men “skipping down to adoption centers to pick out a little boy for themselves.” He also referred to his county’s growing Latino immigrant population as “hordes” that are exacting “a greater and greater toll.”

And in both Maine and Seattle, voters dealt a serious blow to big money in politics!

In Maine, a Clean Elections initiative passed by 10 points that strikes back against Citizens United and bolsters the state’s public financing system. In Seattle, by an even wider margin of 20% voters passed a sweeping initiative to limit the influence of big money in politics by, among other things, capping contributions by corporations with city contracts or that spend significant funds lobbying, making it illegal for city officials and their top aides to take lobbying jobs immediately after leaving office, empowering low-dollar donors, and increasing transparency and accountability.

The results statewide in Virginia were a mixed bag, and because of strong Republican showings in other parts of the state, effective GOP gerrymandering, and, yes, a ton of money spent, the GOP was able to maintain party control of the state Senate.

And in other parts of the South, far-right — and I mean very far-right — Republicans won races for governor that will have a tremendously detrimental impact on the people of those states.

In Kentucky, the election of Republican Matt Bevin to governor yesterday means that the more than half a million Kentuckians who have health insurance thanks to the Affordable Care Act could lose their health care very soon. Bevin has promised to eliminate Kynect, Kentucky’s state exchange established under the ACA, and could undo the Medicaid expansion accepted by the outgoing Democratic governor, Steve Beshear, which insured 400,000 people alone and cut the state’s uninsured rate by more than half.

It’s worth noting that Tea Party Governor-elect Matt Bevin’s winning strategy was to turn out his right-wing base by campaigning on themes such as the backlash to marriage equality, support for county clerk and Religious Right cause célèbre Kim Davis, and promises to defund Planned Parenthood.

And, in Texas, there was the defeat of Houston’s Equal Rights Ordinance, leaving Houston the largest city in the country and the only major city in Texas with no nondiscrimination protections for LGBT residents. That election was especially ugly. Anti-equality groups resorted to fearmongering and inflamed prejudice, distorting the true purpose of the ordinance by referring to it derogatorily as the “Bathroom Ordinance.” Sadly, there is still a lot of work to do in Texas and the South.

One thing is clear: yesterday’s wins AND losses both point to the need to keep fighting.

Americans deserve better than the regressive, draconian agenda that right-wing Republicans are offering. And because the Right is so well-funded and tenacious, we must fight to defend our gains — some on the Right are already talking about legal challenges to yesterday’s victories for the People over big money in politics.