2021: A Great Year For Our Courts - People For the American Way
Skip to main content

Fair and just courts are essential to protecting our lives, our health, and our families. They are an indispensable part of any democracy. As we head to the end of 2021, we can be proud of the phenomenal progress we made this year in the long-term effort to repair the federal courts. The diverse group of spectacular nominees from the White House and the record-breaking pace of confirming them show that President Biden, Senate Majority Leader Chuck Schumer, and Senate Judiciary Committee Chair Dick Durbin fully understand just how important this is.

The Most Judicial Nominations

One consequence of the far-right takeover of the federal courts is that, for the first time, it is becoming an issue that rallies progressives, not just conservatives. In fact, 2020 exit polls and even the Trump campaign’s own post-election analysis revealed that the courts were an issue that helped Biden at the polls. As a former senator who once led the Judiciary Committee, he is well aware that federal courts can empower the marginalized and protect individuals and communities from being victimized by the powerful. Even during the transition, his designated White House Counsel wrote to senators to emphasize the importance of acting quickly to recommend district court nominees from their states before Inauguration Day.

So it is no surprise that President Biden has set a record for the most circuit and district court nominations by the end of a president’s first year in office. With 71 lower court nominations, he has set a modern record, exceeding the previous record of 68 set four years ago by Donald Trump. 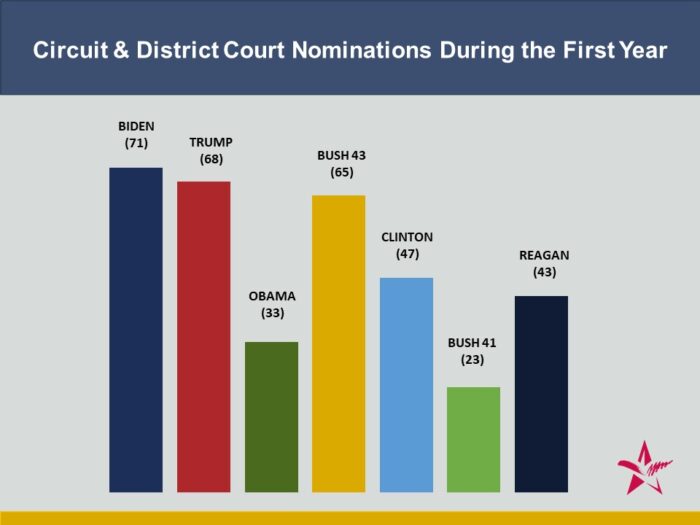 The Most First-Year Confirmations in 40 Years

The record number of nominees would have little impact on the courts if we didn’t have committed leaders in the Senate to confirm them quickly. Sen. Durbin has held prompt confirmation hearings and committee votes. Majority Leader Schumer has pushed through partisan obstruction to schedule votes, even keeping the Senate long past midnight on its last session of the year. Their accomplishments are even more remarkable given that they are operating in an evenly divided Senate.

The fruits of their labor, with the support of the entire Democratic caucus, are plain to see: The Senate has now confirmed 40 of President Biden’s circuit and district court judges. No president since Ronald Reagan (who also had 40) has had so many lower court confirmations in their first year. In fact, the last president to have more was John Kennedy, and that was well over half a century ago. This is a meaningful and lasting accomplishment that Sens. Schumer and Durbin and their Democratic colleagues can be proud of. 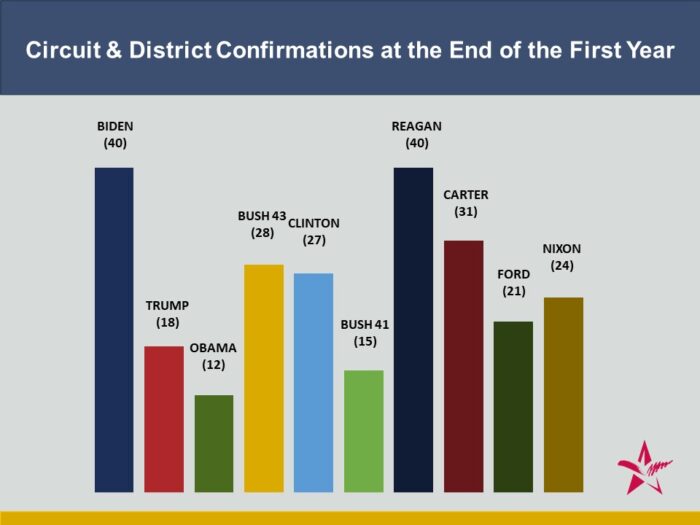 A Blistering Pace on Circuit Courts

Circuit courts are especially important. Their tens of thousands of decisions each year bind all federal courts within their jurisdiction, and those decisions are almost always final, since the Supreme Court hears so few cases each year.

Majority Leader Schumer kept the Senate operating well past midnight Friday and into the predawn hours, not letting up until getting cloture votes to end the filibusters of Ninth Circuit nominees Holly Thomas and Gabriel Sanchez. Even better, while Senate rules ordinarily require all unconfirmed nominations to be returned to the White House at the end of the year, he ensured that the nominations of Thomas and Sanchez would not be returned and that these two can be confirmed as soon as the Senate returns in 2022, making Biden’s 12th and 13th circuit court confirmations, a benchmark Trump did not reach until January 30, 2018. 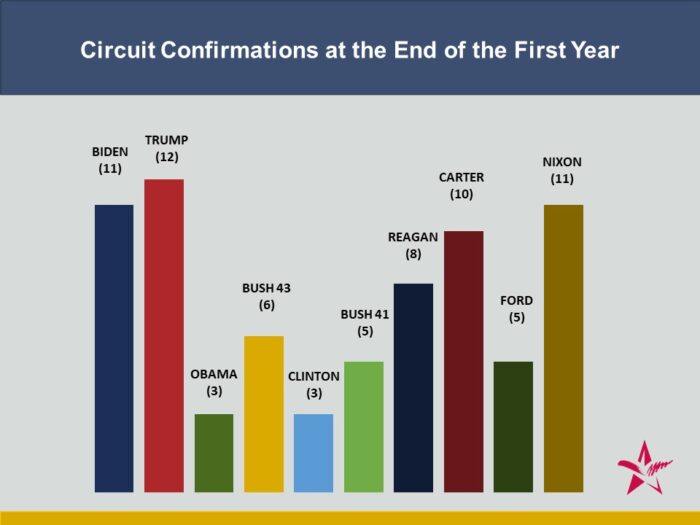 Of course, numbers alone only tell part of the story. President Biden’s judicial nominees have been diverse at a historic level, far exceeding not just Donald Trump but also President Obama, who himself had set records for judicial diversity. When it comes to populating the federal bench with people who look like America, the Biden administration is doing an exemplary job.

More than 60 percent of Biden’s judicial nominees have been people of color, and more than 40 percent have been women of color. These shatter the previous records set by President Obama. While Obama was rightly celebrated for having a more demographically diverse group of nominees than his predecessors, Biden’s commitment to diversity will change the federal bench at an even more rapid pace and represents a stark turnaround from Trump. Only six percent of Biden’s judicial nominees have been white men, compared to the two thirds of Trump nominees who were white men.

Courts around the country have seen barrier-breaking firsts. To name just a few: In Washington, Lauren King became the first Native American federal judge in her district (and only the fourth ever on any federal court). In Colorado, Charlotte Sweeney will be her state’s first openly LGBTQ+ federal judge. Michigan got its first South Asian American federal judge as the Senate confirmed Shalina Kumar in its final hours of 2021. And for the first time in U.S. history, we have a Muslim American as a lifetime federal judge: Zahid Quraishi of New Jersey. 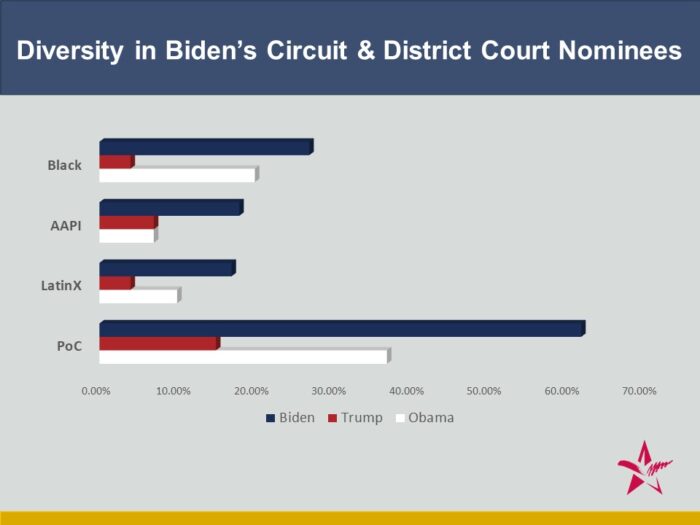 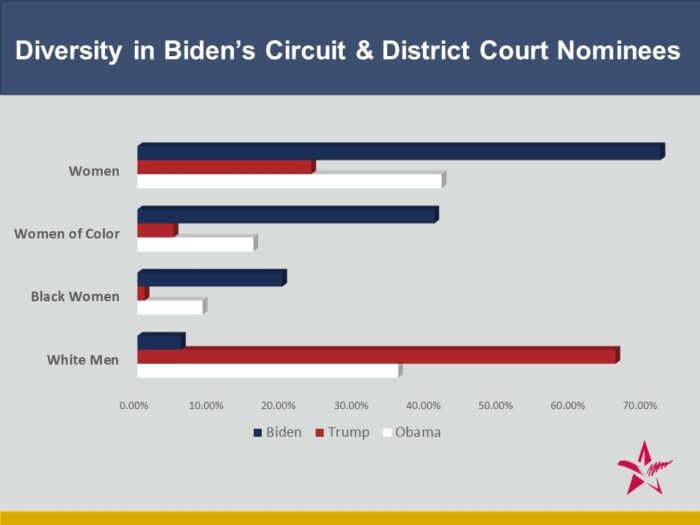 At the circuit level, nearly 70 percent of Biden’s nominees have been people of color, compared to 17 percent for Trump. Nearly a third of his circuit nominees have been Black women –  including inspiring women like Ketanji Brown Jackson (now on the D.C. Circuit), Candace Jackson-Akiwumi (now on the Seventh Circuit), Eunice Lee (now on the Second Circuit), Tiffany Cunningham (now on the Federal Circuit), and Holly Thomas (soon to be on the Ninth Circuit). Judge Jackson-Akiwumi is the only Black judge on the Seventh Circuit, which had become all-white due to Trump’s five appointments to that court. Beth Robinson (now on the Second Circuit) has become the first openly LGBTQ+ woman on a federal appellate court, and she will soon be joined by Alison Nathan, who had her confirmation hearing a few days ago. Newly confirmed Jennifer Sung has become the first AAPI judge from Oregon to be a judge on the Ninth Circuit. 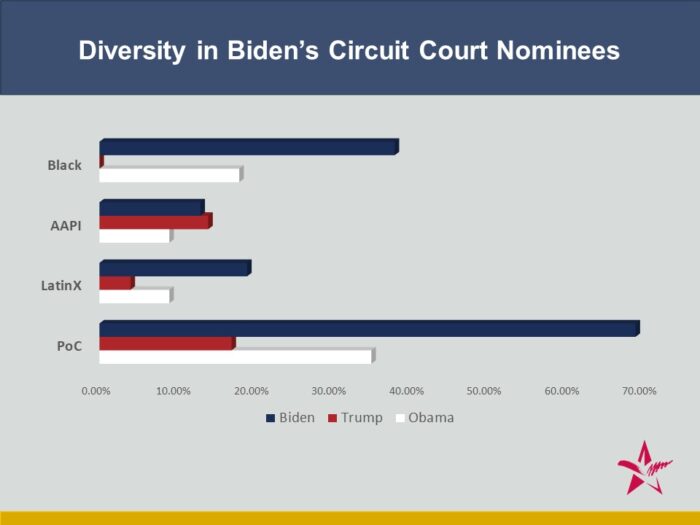 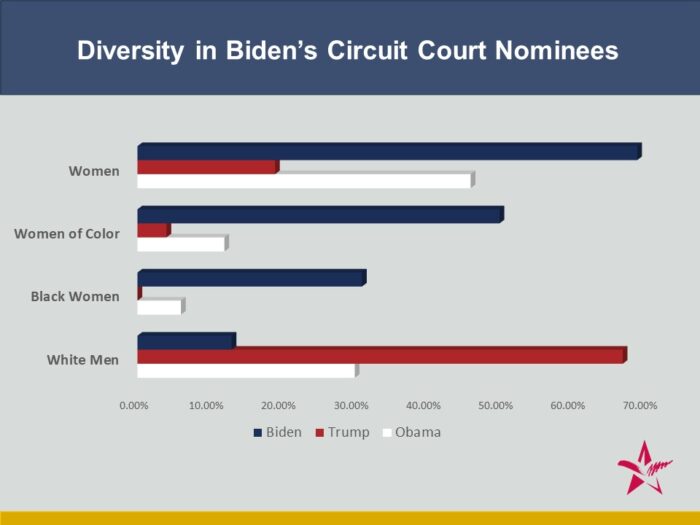 President Biden’s nominees are also bringing unprecedented professional and experiential diversity to the federal courts. Judge Sung has substantial experience as a labor attorney, a background that is severely underrepresented on the bench. And while there have been numerous jurists on the bench with experience as prosecutors, our courts now have judges with substantial experience as public defenders, who know how the criminal justice system works (or fails to work) in real life. That includes Judges Jackson-Akiwumi, Jackson, and Lee, as well as Veronica Rossman (Tenth Circuit), Gustavo Gelpí (First Circuit), and numerous district court judges and nominees.

It has been an extraordinary year, one truly worth celebrating as a thrilling early step in our long-term goal of restoring the courts.