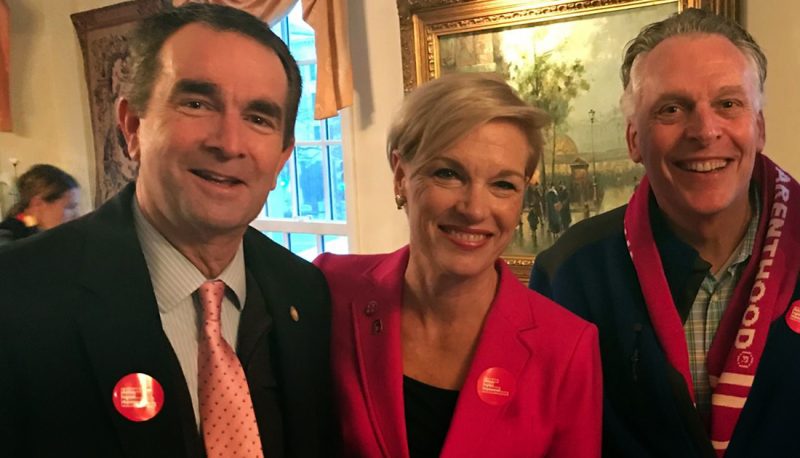 On November 7, Virginia voters will head to the polls to decide who will take the governor’s seat after Governor Terry McAuliffe’s term comes to an end: Democrat Ralph Northam or Republican Ed Gillespie.

Traditionally, progressive voter turnout is suppressed during a non-presidential year, but the election in Virginia this November is not a typical election. Hillary Clinton won the state in 2016, and in light of the Charlottesville tragedy, Trump and Republicans are facing enormous backlash from voters. In 2020, the majority party will redraw the congressional maps, so every election before that is critical to flipping the 17 seats it will take to win back the Virginia House. Only by winning back the state House or Senate will Virginia’s voting districts—which were drawn unfairly on racial lines—be fixed.

In the meantime, it’s important to highlight the critical role played by the governor of Virginia. Outgoing Governor Terry McAuliffe, a Democrat, vetoed several bills brought by the Republican house that would have been devastating to Virginians. Without a Democratic governor to check the increasingly extreme right-wing, here are some of the bills that would currently be law in Virginia:

In a party-line vote, Virginia Republicans voted to defund any women’s health care provider that performs abortions, like the five Planned Parenthood health centers in the state. On February 21, 2017, Governor McAuliffe vetoed the bill, preserving reproductive health care services for tens of thousands of Virginians who rely on these providers.

A troubling and unnecessary barrier to voting passed the Republican-majority legislature and if it wasn’t for McAuliffe’s veto, it would have become law. The bill required voters submitting an application for an absentee ballot by mail or fax to include a copy of a photo ID, despite the fact that a photo would not be useful for verifying their identity.

Virginia House Republicans sent a bill to the governor’s desk that claimed a right of religious officials to refuse to perform same-sex marriage ceremonies that went against their “sincerely held religious beliefs.” Their harmful “License to Discriminate” bill would have become law if McAuliffe had not vetoed the legislation, but the anti-LGBTQ message of Virginia Republicans was still heard loud and clear. The House of Delegates refuses to kill an amendment in the state constitution that defines marriage between one man and one woman; a bill to repeal this amendment has yet to make it to the governor’s desk.

The GOP-controlled House of Delegates passed a bill in January, three days after Trump’s inauguration, that barred any local governments from requiring contractors to pay their workers a “prevailing wage,” or the local standard rate for a position. McAuliffe vetoed the anti-worker bill, which would have the effect of incentivizing low rates and thus low pay for Virginia workers.

Many bills about concealed carry permit bills were proposed in the beginning of 2017. One bill that McAuliffe vetoed represented several false assumptions about the role of military basic training as a qualifier for carrying weapons. The bill would have allowed any person 18-years-old or older and on active military duty or honorably discharged who completed basic training to apply for a concealed gun permit. But completed basic training doesn’t automatically qualify a person to have access to a weapon in the military. State law requires concealed carry applicants to be at least 21 years of age.

It is only due to a Democratic governor that these regressive and sometimes dangerous laws did not become law in Virginia. While Republicans in Virginia worked to pass these laws, very different bills were brought forward by Democrats that would have protected LGBTQ workers from employment and housing discrimination, established paid family leave, raised the minimum wage, helped to ensure equal pay for women and people of color, and prohibited personal use of campaign funds—bills that were killed by the GOP legislative majorities before they even reached the governor’s desk.

Virginia, Make your plans to vote on November 7