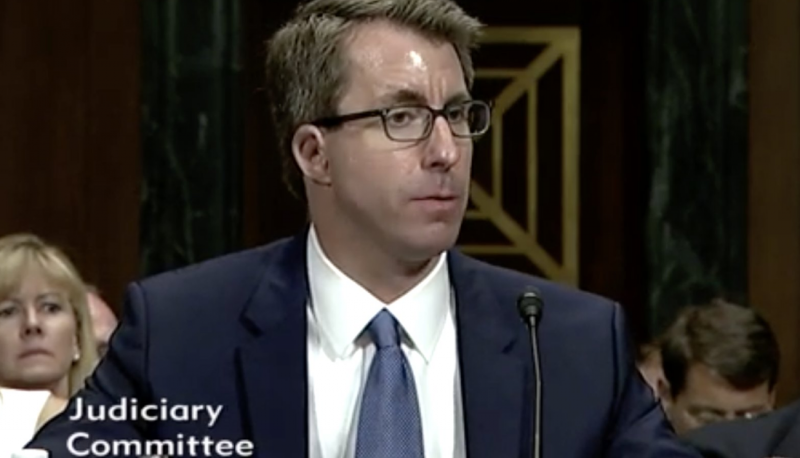 On September 7, President Trump nominated Ryan Bounds to a seat on the U.S. Court of Appeals for the Ninth Circuit. The Senate Judiciary Committee is expected to hold Bounds’ hearing on May 9. People For the American Way wrote to committee members to express our opposition to the Bounds nomination. You can download our letter here.

On behalf of the hundreds of thousands of members of People For the American Way throughout the nation, we write in strong opposition to holding a committee hearing for Ninth Circuit nominee Ryan Bounds over the objections of both of his home state senators. Rather than advancing this nomination, Chairman Chuck Grassley should be urging the president to withdraw it.

Under the chairman’s policy for President Obama’s nominees, the opposition of even one home state senator was sufficient to prevent a hearing. But when Donald Trump became president, the chairman adopted a new policy, holding hearings for two circuit court nominees who had the support of only one home state senator. Now, with the Bounds hearing, Chairman Grassley is destroying the blue slip policy altogether.

Unilaterally changing the rules based solely on who it benefits is the antithesis of the rule of law, and it is toxic to a democracy. How ironic it is that this is happening in the Judiciary Committee, which is tasked to make sure our future judges will protect the rule of law.

The blue slip policy is not simply a courtesy; it is also a check on untrammeled power. The Constitution divides responsibility for staffing our courts between the president and the Senate. This bifurcation is intended to limit the president’s ability to put dangerously unqualified people on the bench. The blue slip policy—no hearings without the consent of both home state senators—has been a vital safety measure protecting the federal judiciary. It has made sure that presidents consult with the home senators before making a nomination, honoring individual senators’ ability to serve the interests of their states and encouraging more consensus nominees.

But no such consultation occurred with this nomination. In his committee questionnaire responses, Bounds detailed the process leading up to his nomination. Conspicuously absent was any mention of either of his home state senators, Ron Wyden or Jeff Merkley. In December 2016, the same month that his sister became Rep. Greg Walden’s chief of staff,i Bounds spoke with Walden, Walden’s outgoing chief of staff Brian McDonald, and “a Washington lawyer familiar with the judicial nominations process.”

After Trump’s inauguration, Sens. Wyden and Merkley told the White House they were creating a bipartisan selection commission to identify potential nominees. However, the president bypassed this process, interviewing Bounds in early March, before the senators had even set up their commission. Trump continued to disregard this process and nominated Bounds in September over both senators’ objections.

Five months later, the commission reported Bounds as one of four candidates for the vacancy, but that recommendation turned out to be based on woefully incomplete information. Bounds had not disclosed a number of college newspaper articles he had authored evidencing a fundamental misunderstanding of—or even hostility toward—his fellow students who were parts of communities that have long been subjected to systemic discrimination.ii The commission’s recommendation was tainted, and both of the nominee’s home state senators announced their opposition to the nomination, choosing not to return their blue slips.iii

Even in situations where senators return “negative blue slips,” that is return their blue slips but say that they oppose the nomination, hearings have been held minimal times.iv In no case was the nominee ever confirmed unless they subsequently garnered the support of both home state senators.

In 1985, then-Chairman Strom Thurmond, a Republican, held a hearing for a district court nominee over the objections of Hawaii’s senators, both Democrats. However, Thurmond stopped there, not holding a committee vote.v The second time was in 2003, when then-Chairman Orrin Hatch held a hearing for Sixth Circuit nominee Henry Saad of Michigan over the objections of both home state senators (again, both Democrats). However, the Senate did not confirm him.

So, today, actually should be noted in the annals of the Senate and of our Committee for the precedent set by this hearing, for the hubris behind it, and for the brazenness of the double standard it sets. In collusion with a White House of the same party, the Senate’s majority this year has launched a lengthening series of changed practices and broken rules on this Committee.

While Chairman Grassley has the power to change the blue slip policy to help his political party, that doesn’t make it right. A hearing for Ryan Bounds is the wrong thing to do, and it will cause immense damage to the Judiciary Committee, to the United States Senate, and to the rule of law.