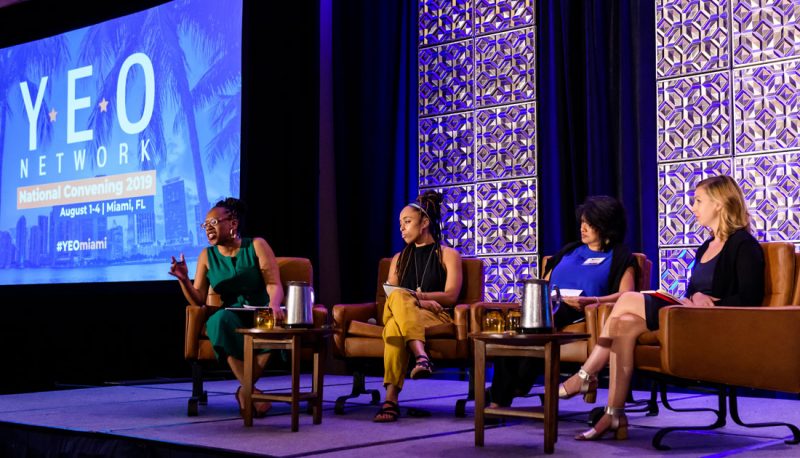 The YEO Network National Convening 2019 panel, titled "“The Role of Philanthropy in Supporting Progressive Governance and Policy Implementation." Left to right: Lateefah Simon of the Akonadi Foundation, Tynesha McHarris of NoVo FoundationNina Ahmad of the Donors of Color Network, and Leah Hunt-Hendrix of Way to Win

Learn more about the YEO Network

“Philanthropy is not justice,” said Lateefah Simon, president of the Akonadi Foundation, in the opening panel at the Young Elected Officials (YEO) Network 2019 national convening in Miami on August 3.

As wealth became concentrated in the hands of the few through centuries of racial exploitation, Simon continued, “a lot of backs were broke.” Simon said as She noted that participating in philanthropic work is one way to redistribute that money to those who have rights to it.

The panel, titled “The Role of Philanthropy in Supporting Progressive Governance and Policy Implementation,” situated equity and justice as central to progressive governance and highlighted the unique role that philanthropy can play in advancing justice for communities of color. The panel’s experts discussed the implications of our society’s reliance on philanthropic dollars to support disadvantaged communities. Speaking about her experience as a Black woman in the foundation community, NoVo Foundation Program Officer Tynesha McHarris told the audience of more than 100 young elected officials that “I wanted freedom for my people, but the process of getting dollars was humiliating my people. I ended up landing in resourcing because I wanted to stop that humiliation.” The NoVo Foundation distributes grants to initiatives dedicated to ending violence against women and supporting indigenous communities to advance their vision of a culture of equality and partnership.

“We’re all gatekeepers to money, to power and to information,” said Simon. She implored the audience to consider their intentions by asking themselves three questions:

As they reviewed these questions, Simon challenged everyone to subvert norms of gatekeeping, and urged them to consider their goals, the people they want to reach and the real world impact of their policies. She noted that “the goal is actually to give the power back,” and called on the audience to consider how they might “[build] structures that will do that.” Simon explained, “It’s not helpful if I open a gate and then someone comes and closes it right behind me, so how are you collaborating to avoid that?”

Leah Hunt-Hendrix, the cofounder and vice president of Way to Win, added that she considers herself “anti-philanthropy,” calling it anti-democratic because it concentrates power to a wealthy few. She recounted the way philanthropic policies were developed to create tax havens to help the rich preserve their wealth. “Who are the communities they are trying to serve and why?” added Ahmad.

McHarris also spoke about the threat of having grant dollars revoked and how the threat of having grant dollars revoked limits organizers’ ability to create long-term solutions tailored for their communities. An example of this is among political donors, said Hunt-Hendrix, where there’s a conversation about which voters need to be turned out. “Meanwhile, we aren’t contesting races around the country,” she said, only funding races in swing states, “and we’re funding milquetoast candidates instead of the people who want to shake things up.”

At Way to Win, Hunt-Hendrix said, they work to push back against the old habits of “helicoptering in get-out-the-vote programs,” and talk to philanthropists about the types of long-term and sustainable voter engagement programs that will have real impact.

Simon’s solution these challenges is clear: “We need to talk about using my momma’s money [i.e. taxes] and not relying on philanthropy to fund the Boys and Girls Club.” She called on the attendees to create structural changes that will move communities away from this reliance on philanthropy. In the meantime, Ahmad said, “We need better representation matters at all levels of philanthropy from grant manager to the board president.”