ACT NOW: Trumpcare Is Back And Worse Than Ever - People For the American Way
Skip to main content

ACT NOW: Trumpcare Is Back And Worse Than Ever 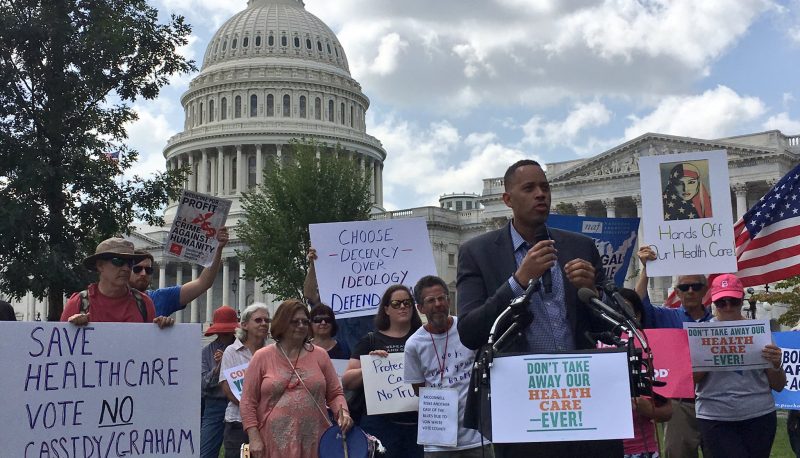 In the early morning hours of July 28, 51 U.S. senators voted against a health care repeal bill that would have robbed millions of Americans of their health care and been particularly devastating to women and people of color. Your stories of resistance are what made this victory a reality, but you’re needed again now. Senators Cassidy, Graham, Heller, and Johnson have decided to resurrect Trumpcare. While it’s no better than before—in fact, it’s the worst version yet—GOP senators seem willing to bow under political pressure and pass it before time runs out on September 30. They know it’s unpopular, and they’re trying to ram it through while they only need 51 votes.

Please tell Republicans to oppose this effort to bring up Graham-Cassidy instead of focusing on the bipartisan negotiations which we should be doing.

PFAW was on Capitol Hill the very next day to show that we will not go away, and the voice of the people will be heard. Diallo Brooks, PFAW’s director of outreach and public engagement, spoke to the gathering of activists, organizations, and senators.

If you haven’t joined us yet in this round of the Trumpcare fight, there are five things that PFAW is asking you to do right now.

Senate Republicans are counting on us being too tired to fight this Trumpcare battle. We need to show them that the resistance is stronger than ever.

health care Obamacare The Resistance Trumpcare Why I Resist