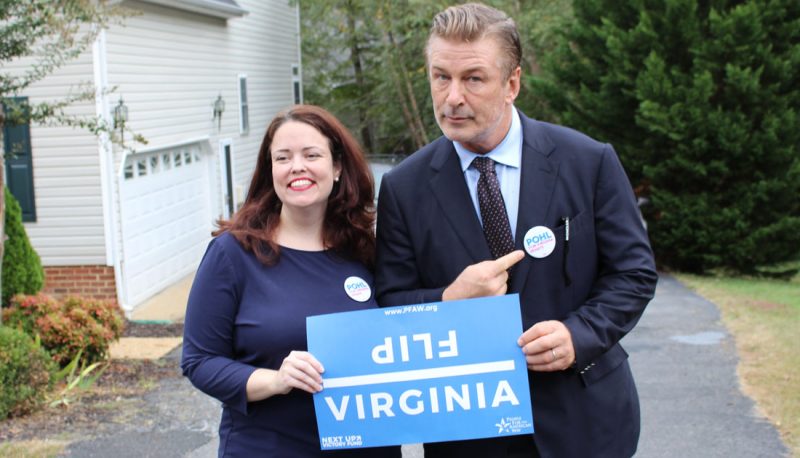 At the home of an Amanda Pohl supporter in Midlothian, Mr. Baldwin, surrounded by press and volunteers, addressed Pohl’s supporters, saying, “You have a real opportunity here for changes, for the kind of change we have to have in this country. This is like a bellwether for the country here.”

Baldwin stressed the need for political engagement among Virginians, encouraging those in attendance to “reach out to [their] friends in some way. In the world of politics, it is about some degree of giving.” Whether it’s through making phone calls, going door-to-door in other neighborhoods, or donating to a campaign, any and all effort to support Democratic candidates is encouraged.

Republican control of the Virginia General Assembly is hanging by just four legislative seats, and in these last days before Election Day, it is imperative that progressives stand together to help Democratic candidates win their elections. Amanda Pohl, Joshua Cole, Qasim Rashid, and Dan Helmer, and every Next Up-endorsed candidate in Virginia, can affect real winds of change to Virginia that will blow away Republicans’ narrow-minded rhetoric and policies against women, immigrants, people of color, and the LGBTQ+ community with progressive, inclusive policies that protect all Virginians.

Alec Baldwin is here for Amanda Pohl! Watch as he rallies volunteers to knock doors for the progressive young candidate who is going to help turn Virginia blue! pfaw.org/nextupva

WATCH: PFAW President Michael Keegan and Board Member Alec Baldwin were in Fredericksburg, Va. to support Jess Foster, Joshua Cole and Qasim Rashid for Virginia. As Alec Baldwin said, these are three people who channel their caring, wisdom, and patriotism to help other people by running for office.

It is an honor to be in the company of these great Virginia candidates! Together we can flip VA blue! Hear from VA House candidate Joshua Cole and VA Senate candidate Qasim Rashid now.Learn more: pfaw.org/virginia

It was an honor to join PFAW board members Alec Baldwin and Dolores Huerta at the campaign office of Next Up Victory Fund-endorsed Dan Helmer to deliver pizzas and thank volunteers for showing up! Together we can flip Virginia blue! pfaw.org/virginia