All Current SCOTUS Justices Supported Brown v. Board at Their Nominations Hearings — Why Won't Some of Trump's Nominees? - People For the American Way
Skip to main content

All Current SCOTUS Justices Supported Brown v. Board at Their Nominations Hearings — Why Won’t Some of Trump’s Nominees? 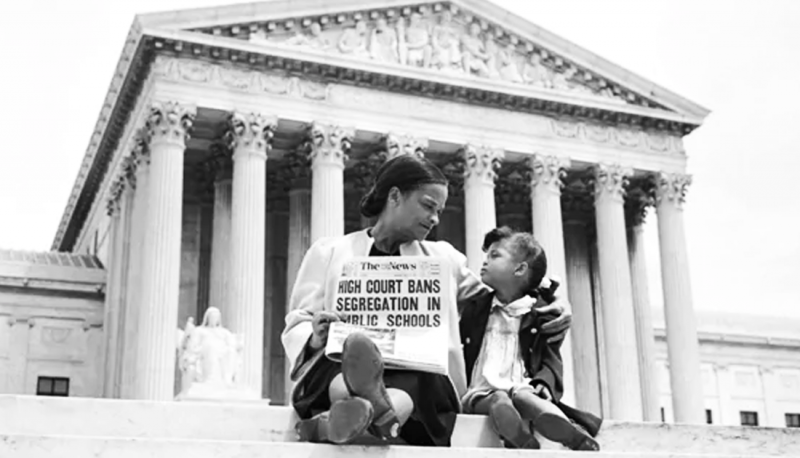 Nettie Hunt, sitting on steps of Supreme Court, holding newspaper, explaining to her daughter Nikie the meaning of the Supreme Court's decision banning school segregation. Photo via Library of Congress

As Donald Trump and his collaborators have violated one democratic norm after another, things once thought impossible have become common. Even our strong national consensus supporting the landmark Brown v. Board of Education decision seems to be fraying, as demonstrated by several of Trump’s most recent judicial nominees.

In recent weeks, nominees such as Andrew Oldham (Fifth Circuit) and Wendy Vitter (Eastern District of Louisiana) have gone to great lengths to avoid answering perhaps the simplest “gimme” question possible: Was Brown rightly decided? And it isn’t just them; at a hearing for four district court nominees on the same day as Oldham’s, they all dodged the question. Amazingly, some of Trump’s nominees are claiming that judicial ethics prohibit them from commenting on any Supreme Court decisions.

That’s garbage, and they know it. And it would certainly come as a surprise to the current members of the Supreme Court. Before Neil Gorsuch, the future justices made no effort whatsoever to avoid expressing an opinion about the correctness of Brown at their confirmation hearings. After all, why would they? And even Gorsuch ultimately agreed.

I think Brown v. Board of Education was right when it was decided, and I think it would have been right if it had been decided 80 years before. I think Plessy v. Ferguson was wrong on the day it was decided.

Four years later, Clarence Thomas cited that case in particular in describing the awe he felt when he was nominated to the Supreme Court:

I am being nominated to the Court that decided Brown … When the President made the announcement that I would be nominated to the Supreme Court…That is certainly one of the cases—even before I knew all of the legal ramifications, it is one that changed my life and changed the South, and, of course, even though I did not go to desegregated schools until I was virtually an adult.

In 1993, Ruth Bader Ginsburg described how Brown came about, explaining why it was both correct and historically inevitable:

But let me try to respond to your question about Brown (1954), about moving ahead of society and at what level. First, recall that Brown wasn’t born in a day. Thurgood Marshall came to the Court showing that facilities or opportunities were not equal, in case after case, in notable 1948 and 1950 higher education cases, particularly: McLaurin (1950), Sweatt v. Painter (1950), Sipuel (1948), a line started even earlier, in 1938, in Gaines. He set the building blocks, until it became obvious that separate couldn’t be equal.

Something else had happened. One of the influences on Brown, I think, was a war we had just come through, in which people were exterminated on the basis of what other people called their race. And I don’t think that apartheid in the United States could long outlive the Holocaust. From that perspective, the Court was not moving ahead of most of the people. There was resistance, of course, indeed massive resistance in some parts of the country.

But Brown itself, even Brown didn’t command an end to all racial segregation. The end came years later. Brown was decided in 1954. It wasn’t until Loving v. Virginia in 1967 that the Court took the final step in the series by declaring a miscegenation law unconstitutional.

As I think of the Fourteenth Amendment, to speak generally, the Fourteenth Amendment perfected a Constitution that before it lacked something very important, and that something was a promise of basic fairness. That promise of basic fairness was not carried out, even though it was in the Constitution, for many, many years. And ever since Brown, the country in all of its branches of government has been trying to make real that promise of fairness.

After that promise was made in the Fourteenth Amendment, decades went by before people tried to keep the promise. With Brown—and it is a legal reason, as well as a moral, practical and every other reason—the country decided we will try to keep our promise.

More than a decade went by before the next Supreme Court nomination, and while the political landscape had shifted immensely between 1994 and 2005, the bipartisan approval of Brown remained. That became clear during an exchange between John Roberts and Sen. Edward Kennedy:

Senator Kennedy: Do you agree with the Court’s conclusion that the segregation of children in public school solely on the basis of race is unconstitutional?

Judge Roberts: I do.

Senator Kennedy: And do you believe that the Court had the power to address segregation of public schools on the basis of the Equal Protection Clause of the Constitution?

Samuel Alito was equally clear in his praise for the correctly decided case:

Senator Durbin: I would ask you at this point—you obviously support Brown v. Board of Education, do you, and the finding of the Court in that?

Senator Durbin: Do you believe that the Constitution protects the right of children in America to be educated in schools that are not segregated?

Judge Alito: Absolutely, Senator. That was one of the greatest, if not the single greatest thing that the Supreme Court of the United States has ever done.

In 2009, Sonia Sotomayor made no effort to avoid talking about the case. She spoke approvingly of how the Court laid the groundwork for Brown’s correction of the Court’s previous mistake:

Brown v. Board of Education has often been described as a radical change by some, and the public perceives it as a radical change. When you actually look at its history, you realize there had been jurisprudence for over 20 years by the court striking down certain—certain schemes that provided ‘‘separate but equal,’’ but in fact didn’t achieve their stated goal.

And so there was underpinnings in Brown v. Board of Education that, in those precedents that came before Brown that obviously gave the court some cause, some reason to re-think this issue of ‘‘separate but equal.’’ They also had before them the—probably one of the most famous dissents in American history, which was the dissent by Justice Harlan in Plessy.

At Elena Kagan’s confirmation hearing the next year, she expressed her support succinctly:

So for nominees of Ronald Reagan, George H. W. Bush, Bill Clinton, George W. Bush, and Barack Obama, the question was a no-brainer: Of course they believed Brown was rightly decided!

During the Trump era, Neil Gorsuch was more evasive on this fundamental point, but even he  spoke positively of Brown and ultimately agreed with the consensus of his predecessors when questioned by Senator Blumenthal:

Senator Blumenthal: Let me ask you. Did you agree or do — I’m sorry, do you agree with the result in Brown v. Board of Education?

Senator Blumenthal: …you agree with the result in Brown v. Board?

Judge Gorsuch: Brown v. Board of Education, Senator, was a correct application of the law of precedent and…

Senator Blumenthal: You agree with it?

Judge Gorsuch: Senator, is a correct application of the law of precedent.

Senator Blumenthal: By the way, when Chief Justice Roberts testified before this committee and he was asked by Senator Kennedy quote do you agree with the courts conclusion? Meaning in Brown, that the segregation of children in public schools solely on the base of race is unconstitutional. Judge Roberts answered unequivocally quote, “I do.”

Senator Blumenthal: Would you agree with Judge Roberts?

Judge Gorsuch: Justice Marshall — sorry, Justice Harlan got the original meaning of the Equal Protection Clause right the first time. And the court recognized that belatedly. It’s one of the great stains on the Supreme Court’s history that it took it so long to get to that decision.

As more and more concerns come up about Trump’s flawed lower court nominees, however, some are refusing to answer even the fundamental question about their view of Brown, claiming that judicial ethics and the behavior of past Supreme Court justices somehow justify their actions. Oldham asserted he was answering the question “the same way” that Gorsuch did, but neither outside observers nor Senator Blumenthal agreed, particularly given Oldham’s absurd claim that it would violate the canons of ethics for a lower court judicial nominee to state that Brown was correctly decided. ”I can’t believe that you just gave me that answer,” exclaimed Senator Blumenthal to Oldham “but you did give it.”

Is the Trump administration coaching its nominees on how to obfuscate on a question whose answer had until now always been obvious? If so, why?

Another of President Trump’s lower court nominees may have given us the answer at his hearing in early April. John Nalbandian, nominee for the Sixth Circuit, expressed his agreement with Brown. But when asked about other cases, such as Roe v. Wade, he refused to express an opinion, prompting Democratic senators to ask why he felt expressing an opinion on one Supreme Court precedent was fine, but expressing an opinion on another Supreme Court precedent was somehow unethical.

So this runaround on Brown we’re seeing from Trump nominees may indeed reflect a departure from the national consensus around that case. But it may also be a reflection of just how far they are willing to depart from that consensus in order to hide their plans to use the federal bench to impose their political beliefs  against women’s reproductive freedoms and other fundamental rights through lifetime judicial appointments.

Put another way, as Republicans continue to erode or eliminate the “blue slip” rule and other mechanisms to push back on Trump’s troubling judicial picks, almost all that Democratic Senators can do at this point is to “subject nominees’ records to close scrutiny and aggressively question them at hearings to expose their most radical views and/or lack of qualifications.” But if nominees refuse to answer even basic questions like what they think of Brown because they figure Republicans will vote for them anyway, the last possible check and balance is gone. Scrutiny and questioning of Trump’s nominees for these important lifetime posts “only works when the public takes notice and puts pressure on the few Republicans willing to defy the administration.”