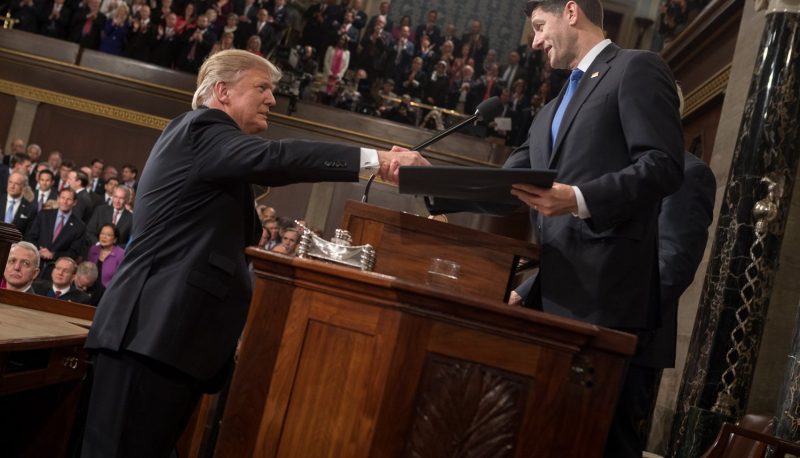 The budget fight is over for now. As we await more details about next year’s proposed funding, among a host of fiscal challenges, another right-wing threat looms large: tax reform.

President Trump has been carrying the right-wing water on tax reform since his days as a candidate. Then last month he updated his tax plan with a truly Trumpian set of vague bullet points that had plenty of hyperbole but few details. It’s clear, though, that what the Right wants and what Trump wants are one and the same—a massive tax giveaway that benefits people like him at the expense of everyone else. House Speaker Paul Ryan is also pushing for a tax system in which corporations and hedge fund managers win, and the American people lose—big time.

President Trump and Speaker Ryan want to rob the poor to give to the rich in their tax plans. The trade-off for their costly tax cuts and increased defense spending is to spend less on programs like Medicaid, Social Security Disability Insurance, food stamps, Temporary Assistance for Needy Families, Supplemental Security Income, child nutrition programs, and Pell Grants. If the social safety net had to be cut (and it doesn’t), the savings would not belong in the hands of the top 1 percent; they would belong in the people’s pockets as investments in other needed initiatives and contributions to long-term deficit reduction.

Though we’ve seen a lot of talk on the Trump-Ryan tax plans and other House and Senate proposals, it’s yet unclear when tax reform will be taken up on Capitol Hill, or when it is, whether it will be able to survive the same internal party divisions that continue to cast doubt on Republican efforts to repeal the Affordable Care Act.

People For the American Way was founded to fight right-wing extremism, and we believe that the tax code is no place to play right-wing politics at everyday Americans’ expense.