Ask Your Senators to Protect the Supreme Court: Sample Script on Gorsuch - People For the American Way
Skip to main content

Ask Your Senators to Protect the Supreme Court: Sample Script on Gorsuch

On Tuesday evening, Donald Trump nominated Neil Gorsuch to the Supreme Court. Based on his troubling record, it’s clear that Gorsuch can’t be trusted to put the Constitution and our laws above his own political beliefs.

It is urgent that people across the country call their senators and ask them to stand up for the Constitution and oppose this nominee. Whether you have already been making calls to your elected officials about Trump’s extreme agenda or it’s your first time ever calling a senator, please make a call right now. It’s not as intimidating as it might seem!

Here’s how it works. Call the Capitol switchboard at (202) 224-3121. Tell them your senator’s name, and they will connect you to their office. (Don’t know who represents you? Look it up here.)

Hi, my name is _________ and I’m a constituent of Senator _______. I’m calling because I’m very concerned about Neil Gorsuch, Donald Trump’s Supreme Court nominee. Gorsuch’s record makes me question whether he’ll follow the Constitution and not his own political ideology.

Does Senator _______ plan to oppose his nomination?

[If yes] Great. Please thank the senator for me, and let him/her know that I’m glad she/he is planning to take a stand and protect our Constitution.

[If no] Please pass along my message to the senator—I’m strongly urging her/him to reconsider their position on this, and to put the people of our state above partisan politics.

[If not sure] Please let the senator know that I am urging him/her strongly to oppose this nominee. We need him/her to take a principled stand, for us and for the Constitution. The most fundamental rights of his/her constituents are at stake.

Afterwards, you can make your call even more impactful by taking additional actions online, helping to spread the word on social media, and asking your friends and family to make calls. A great way to encourage others to join you in speaking out is by sharing this graphic online: 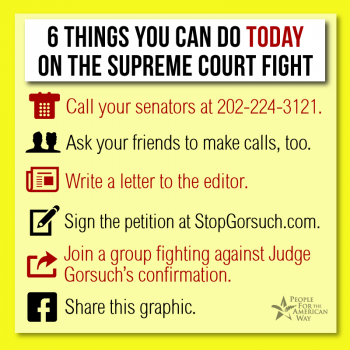