At Barr's Senate Hearing, Expect Graham to Work for Trump - People For the American Way
Skip to main content

At Barr’s Senate Hearing, Expect Graham to Work for Trump 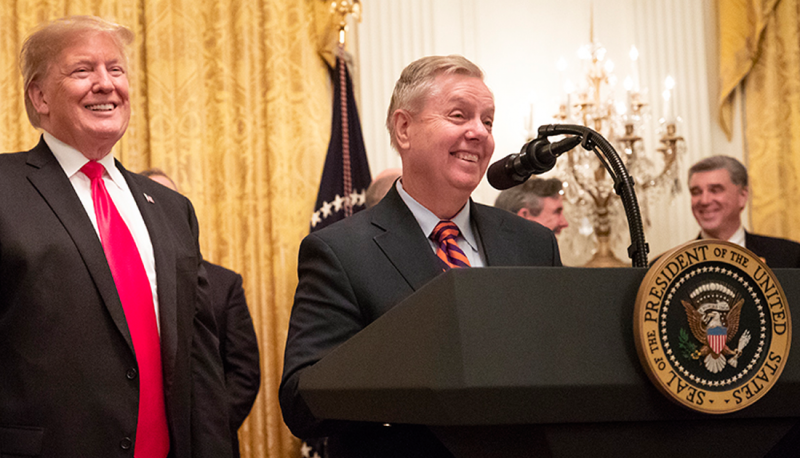 Attorney General Barr is scheduled to testify at an oversight hearing of the Senate Judiciary Committee on May 1 on matters relating to the Russian effort to make Donald Trump president of the United States. Chairman Lindsey Graham should act like his House counterpart and perform genuine oversight of the campaign’s role and the president’s repeated efforts to obstruct the investigation.

Instead, based on his past behavior, he is likely to collaborate with Trump’s disinformation campaign that the special counsel’s investigation cleared him of wrongdoing and that the investigation itself is a threat to our democracy.

As anyone who has read the redacted Mueller report knows, the last thing it did was clear Trump of wrongdoing, criminal or otherwise. A former military prosecutor and judge advocate general, Graham knows about the criminal law. In fact, when President Clinton did far less than Trump did to conceal a personal matter from the Whitewater investigators, Graham found it a criminal act of obstruction of justice:

Even if the report had cleared the president of criminal conduct, that should not matter to Graham. As he said in 1999:

If Graham believed that what President Clinton did to keep an extramarital affair secret was worthy of impeachment, then the actions described in the Mueller report surely warrant genuine oversight by the Judiciary Committee.

But another version of Graham has emerged, one whose redefinition of impeachable offenses trumps the standard he used with a Democratic president. In fact, during his first hearing as chairman in January, Graham himself remarked on his two versions:

Two versions of Lindsey Graham: "So about me. I want us to do better [than last year], and I’ll be as measured as possible. The immigration Lindsey will show up, but the other guy is there, too. And I don’t like him any more than you do." https://t.co/dPD5mC1yme pic.twitter.com/xOI16TTR2E

“Immigration Lindsey” presents himself as a responsible legislator who reaches across the aisle to get things done. But “the other guy” refers to his embarrassing performance for Trump during the Kavanaugh confirmation hearings. That Lindsey is a raving, vindictive partisan with an audience of one: Donald J. Trump. Without the slightest visible recognition of irony, he attacked Democrats for not suppressing the fact that a woman had made a credible allegation that Kavanaugh had sexually assaulted her:

Lindsey Graham was a raving partisan at the Kavanaugh hearing: "What you want to do is destroy this guy’s life, hold this seat open and hope you win in 2020. You’ve said that, not me." https://t.co/dPD5mC1yme pic.twitter.com/sJhC9zOpUu

But “the other guy” wasn’t around when his party blocked Judge Merrick Garland from even having a hearing for the Supreme Court, just so Graham’s party could “hold this seat open and hope you win in” the next election.

“The other guy” in Lindsey Graham also bellowed at Kavanaugh’s hearing:

"To my Republican colleagues, if you vote no, you’re legitimizing the most despicable thing I have seen in my time in politics.

[Turning to the Democrats] You want this seat? I hope you never get it." https://t.co/dPD5mC1yme #MuellerReport #GOPhypocrisy pic.twitter.com/10lj3aQ7qb

The first was President Donald Trump, who was watching the hearing and loves the stridency and confrontation that Graham had on display.

The second was his undecided Republican colleagues. Graham’s cajoling played as an attempt to stiffen their spines while also trying to shame them into being for Kavanaugh.

The third audience was Republican voters in Graham’s home state of South Carolina. In each of his last two re-election races, Graham faced primary challengers who cast him as insufficiently conservative. He won. But with another re-election race coming up in 2020 and Trump’s conservative base flexing its muscles in GOP primaries around the country in 2018, Graham might have faced a major challenge in two years’ time. That seems less likely now — although who knows what the next two years will hold.

Since being elevated to chairman, Graham has continued to say and do whatever it takes to get Trump’s approval, truth notwithstanding. Bucking a tradition that goes back long before Graham was born, he has eliminated the requirement that both circuit and district court judicial nominees have the support of both home state senators. To justify applying one set of rules to Republicans and another to Democrats, Graham has constructed an entire alternative history of partisan strife around judicial nominations. During the less than four months he has led the committee, Graham has advanced the nominations of nine circuit court nominees over the objections of one or both home state senators. That includes Californians Kenneth Lee and Daniel Collins to the 9th Circuit, over the objections of fellow Judiciary Committee members Dianne Feinstein (who is also ranking member) and Kamala Harris.

Holding hearings for California circuit court nominees over the objection of the ranking member, of all people, is exactly the kind of thing “Immigration Lindsey” would not do. But Trump wants his nominees on the bench, and if that means showing unprecedented disrespect to his committee counterpart, then that’s what “the other guy” will do.

America needs a Congress that is willing to conduct genuine oversight over the Department of Justice in matters addressed by the Mueller report. In the House, Judiciary Committee Chairman Jerry Nadler is doing just that. But in the Senate, we can expect Lindsey Graham to spin an alternative reality in the service of Donald Trump.