BALTIMORE SUN: Presidents should be picked by popular vote - People For the American Way
Skip to main content

BALTIMORE SUN: Presidents should be picked by popular vote 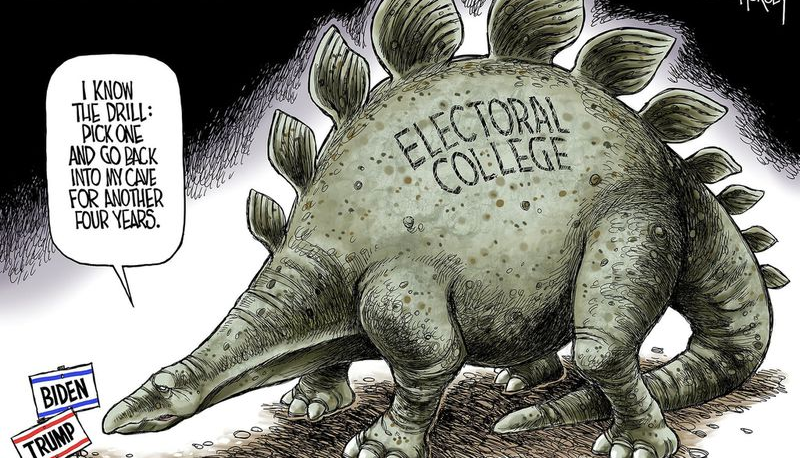 This piece was originally published by The Baltimore Sun.

This year, when Joe Biden passed the threshold of more votes cast than had been cast for any candidate in U.S. history — clearly winning the popular vote — the Electoral College system meant it was still far from assured that he would win the election. The shadow that loomed over Mr. Biden’s achievement, and the threat that once again the will of the people could be subverted, was all too clear.

It’s also painfully obvious that the Electoral College map forces candidates to focus an inordinate amount of time and money on a handful of competitive swing states, like Florida and Pennsylvania — de-prioritizing the needs and concerns of millions of Americans, because candidates don’t need their votes to win.

To end the dominance of the Electoral College and bridge this gap in our democracy, we support the state-based National Popular Vote campaign, which is exactly what it sounds like: a change to electing presidents based on the total number of votes cast.

In addition, we have to put new energy into passing the John Lewis Voting Rights Advancement Act — and if the U.S. Senate remains in Republican hands, to relentlessly shame it for failing to do so before now.

The VRAA would help put a stop to the voter suppression that has raged out of control, especially for communities of color and in Native American communities, since the Supreme Court gutted the original Voting Rights Act in 2013. Purges of voter rolls, shuttering of polling places, outrageous voter ID requirements — all are the legacy of the loss of the preclearance requirement in the wrecked Voting Rights Act, and they need to stop.

At the same time, we need to stop the perversion of our political system by big money pouring into our elections. When wealthy special interests play an outsized role in the electoral process, the result is lower voter turnout — particularly among people of color, Native American tribes and low-income communities — and, ultimately, policies that favor wealthy and corporate interests. At the federal level, the For the People Act passed by the House (and sidelined by the GOP-controlled Senate) contains many provisions to limit the role moneyed interests can play.

Finally, expanding voting rights for disenfranchised communities also means passing the Washington, D.C., Admissions Act and granting statehood to Puerto Rico to fully realize our vision of an inclusive voting system. Despite paying federal taxes, D.C.’s 700,000 residents — half of whom are Black — lack representation in Congress, as do the people of Puerto Rico, who voted in favor of statehood for the sixth time on Election Day. The citizens of both places deserve equal status in the U.S. and a voice in our federal government.

In this election, millions of Americans withstood a public health crisis — and for voters of color, shameful voter suppression tactics — in order to vote. We have shown our sheer will and determination to make our voices heard at the ballot box, but we still have a system that doesn’t fully honor the principle of one person, one vote. Instead, we have one that reflects the undemocratic belief that has characterized too much of our history: that some people deserve more power than others. And that’s wrong.

Now let’s get to work.