Biden and Senate Democrats Are Setting Records for Judicial Nominations

People For has spent decades focusing on the federal courts because they have an enormous impact on every issue we care about: racial justice, religious liberty, gender justice, LGBTQ+ equality, corporate accountability, and fair elections. A healthy democracy cannot exist without qualified judges ensuring that our rights, laws, and Constitution are protected. That is why we  fought so hard against the Republican project to stack the courts with dangerously extreme and often unqualified individuals when Donald Trump was in office. With nearly a third of all active circuit court judges put on the bench by Trump, we have a lot of catching up to do.

And we are doing it. The Biden administration and Senate Democrats have been hearing the message from Americans, and they have been making repairing the courts a priority.

The White House and Senate have given us a rapid pace of confirmations not seen in nearly half a century. At the end of September, Joe Biden has been in office for a little more than eight months, and he has already had 14 lifetime judicial nominees confirmed. That is more than any of his predecessors at the same point in their presidency since Gerald Ford. 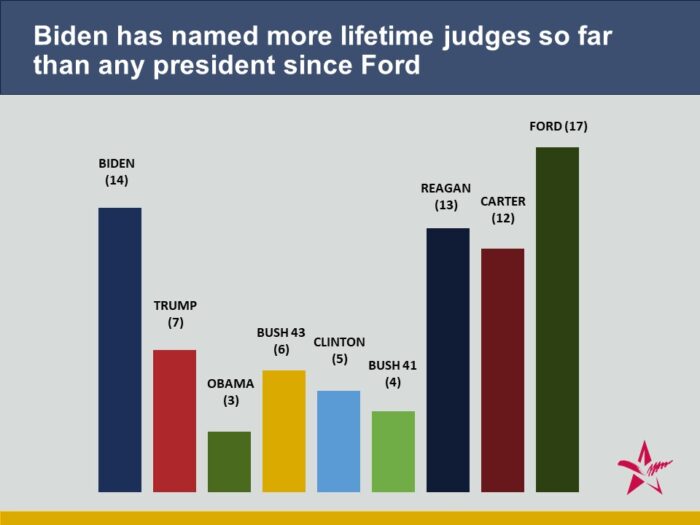 The White House and Senate Democrats have been particularly focused on circuit courts, which are enormously important. Since the Supreme Court hears so few cases every year, circuit courts almost always have the final say when a case is appealed. Any ruling by a circuit court interpreting the Constitution or federal law becomes the law in every state within that circuit. Biden’s five confirmed circuit court judges are the most at this point in a presidency since Richard Nixon.

Of course, numbers alone only tell part of the story. President Biden’s judicial nominees have been diverse at a historic level, far exceeding not just Donald Trump but also President Obama, who himself had set records for judicial diversity.

For instance, more than three quarters of Biden’s circuit nominees have been people of color, and more than three quarters have been women. Almost 40% have been Black women. The White House is not just “tinkering around the edges” to improve diversity on the bench but instead has so far demonstrated a praiseworthy commitment to dramatically changing the face of the federal judiciary for the better. As good as President Obama’s record was at the time, much more is needed—and that is exactly what we are getting. 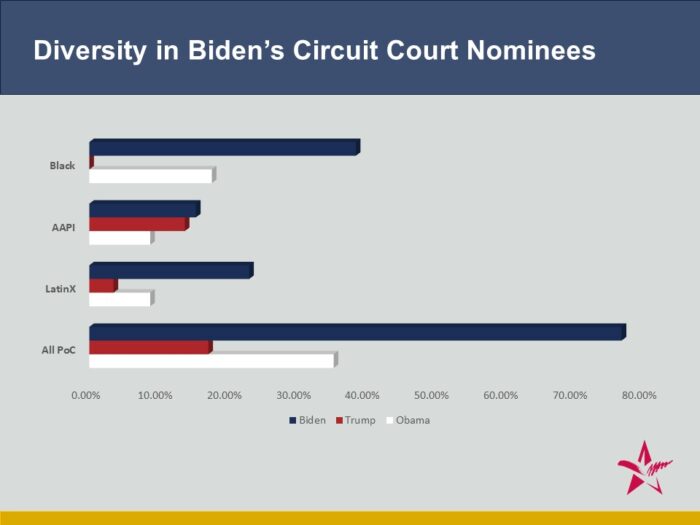 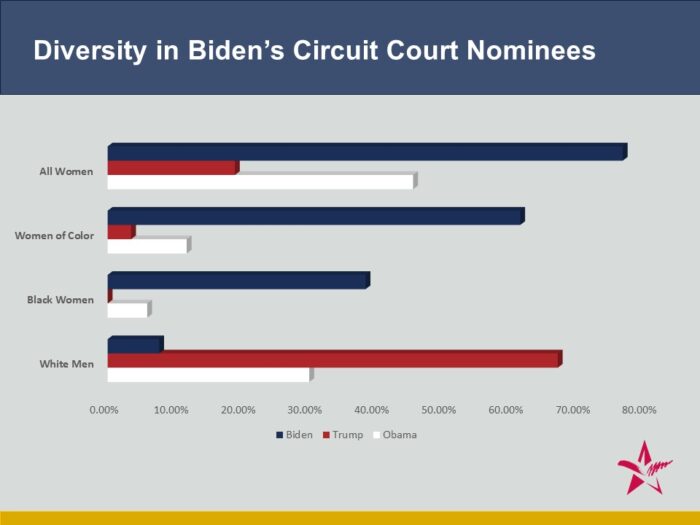 This is giving the American people some notable firsts. To name just a few, Tiffany Cunningham became the first Black judge on the Federal Circuit. Zahid Quraishi of New Jersey became the country’s first Muslim-American lifetime federal judge. Current Second Circuit nominee (and Vermont Supreme Court Justice) Beth Robinson will be the first openly LGBTQ+ woman on any federal appeals court. Washington’s Lauren King will become the first Native American federal judge in the district and only the fourth ever on any federal court. Jennifer Sung will become the first AAPI judge from Oregon on the Ninth Circuit, and Lucy Koh (also nominated to the Ninth Circuit) will become the first Korean-American woman on any circuit court.

We are also seeing the nominations of accomplished attorneys who have worked at respected civil rights organizations. These include Myrna Pérez (Second Circuit), a career voting rights advocate with the Brennan Center; Beth Robinson (Second Circuit), co-founder and leader of Vermont Freedom to Marry; Holly Thomas (Ninth Circuit), who worked at NAACP LDF; and Hernán D. Vera and David Herrera Urias (district courts in California and New Mexico), who spent parts of their legal careers at MALDEF.

Other Biden nominees are bringing various kinds of professional diversity and lived experience to the bench. For instance, Jennifer Sung (Ninth Circuit) has spent most of her legal career protecting the rights of workers and organized labor; Angel Kelley (district court in Massachusetts) began her legal career at the Legal Aid Society; Jia Cobb (D.C. district court) is a civil rights plaintiffs’ attorney; and Charlotte Sweeney (district court in Colorado) represents employees in discrimination, civil rights, and wrongful discharge cases.

The federal courts cannot perform their function of serving justice if the overwhelming majority of the judges who sit on them only have experience as former prosecutors and corporate lawyers. All judges can learn from the different experiences of their colleagues. Broadening the professional diversity of the bench helps strengthen the federal courts and protect all of our rights.

So the White House is to be commended for nominating so many highly qualified individuals. And Senate Democrats are to be commended for taking the committee and floor time needed to get these nominees through the confirmation process in the face of extraordinary levels of Republican obstruction, especially when there are so many equally important issues also needing the chamber’s attention.