Finally, some good news: today a federal judge in Florida struck down the state’s ban on marriage for same-sex couples.

U.S. District Judge Robert L. Hinkle, nominated by President Clinton in the 1990s, ruled the 2008 ban unconstitutional on equal protection and due process grounds and predicted that future generations will look back with shock at the views of those who supported the ban:

'When observers look back 50 years from now, the arguments supporting Florida’s ban on same-sex marriage, though just as sincerely held, will again seem an obvious pretext for discrimination,' Hinkle wrote. 'Observers who are not now of age will wonder just how those views could have been held.'

While the decision has been stayed — meaning that couples cannot immediately begin getting married — it is a significant step forward for equality. Congratulations, Florida! 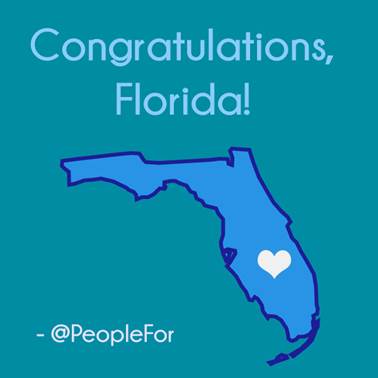 PFAW Foundation Rallies at the Supreme Court for #LoveWins