Brett Kavanaugh Refuses to Criticize Trump’s Attacks on the Judiciary 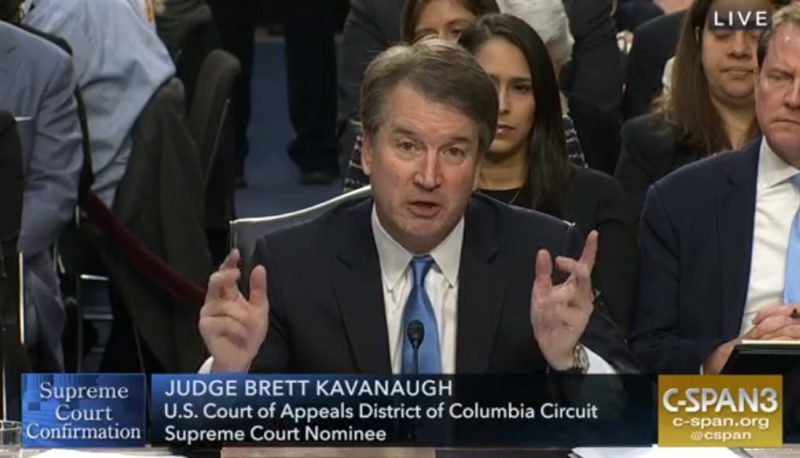 On the third day of his Supreme Court confirmation hearing, Brett Kavanaugh made his fealty to President Trump clear in an exchange with Sen. Richard Blumenthal.

The senator pointed out how the independence of the federal judiciary is under attack from Trump. Blumenthal asked what should have been an easy question, about the judge in the Trump University case:

Blumenthal:  Do you believe that a judge should be attacked based on his heritage?

Blumenthal:  The president of the United States attacked Judge Gonzalo Curiel, saying that “the judge who happens to be, we believe, Mexican” … Do you believe that judges should be attacked based on their heritage?

Kavanaugh refused to give an opinion on Trump’s outrageous statement. Blumenthal pointed out that judges have an obligation to protect the independence of the courts, but the nominee would not criticize a flagrantly bigoted attack against a sitting judge that was made by Donald Trump.

We may wonder what makes Trump so special, but Kavanaugh knows just how wonderfully awesome our Powerful Leader is. Remember what he said on the night he was nominated?

Mr. President, thank you. Throughout this process, I’ve witnessed firsthand your appreciation for the vital role of the American judiciary.

No president has ever consulted more widely, or talked with more people from more backgrounds, to seek input about a Supreme Court nomination.

We have seen Trump demand such sycophantic praise from cabinet members in White House meetings, and it is sickening. But at least they’re part of the executive branch. An independent judge should never be a toady to the president.

Kavanaugh unconvincingly told Blumenthal that he had meant that with new telecommunications technology, the administration was able to reach out to more people than previous presidents could.

These are not normal times. The Senate should not hand a lifetime seat on the nation’s highest court to a judge who not only cannot bring himself to criticize bigoted attacks on the courts made by Donald Trump, but who flowers him with praise that would make Kim Jong-un blush.