Brett Kavanaugh Would Put Trump Above the Law 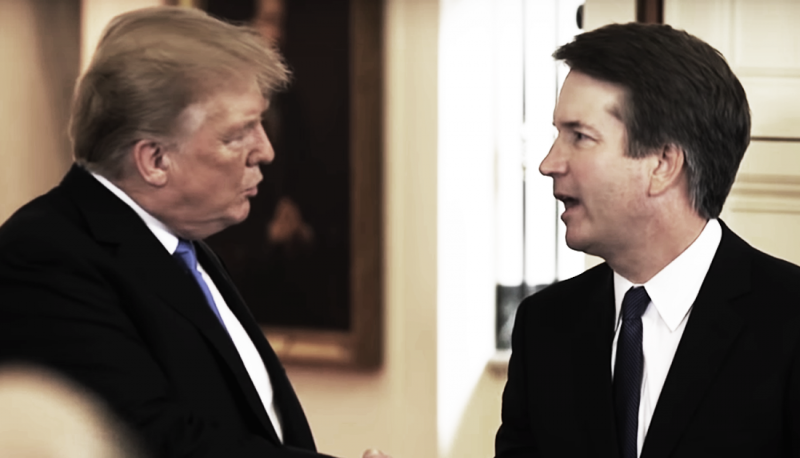 Our federal judicial system provides an essential check on the ability of a president to abuse his power and exceed the authority granted under the Constitution. In the era of Donald Trump, the Supreme Court may very well determine whether our democracy survives his presidency. Ominously, the person he has chosen to serve on the Supreme Court has an extensive record demonstrating his belief that the president is above the law.

Brett Kavanaugh’s commitment to unlimited presidential power is no doubt one of the reasons President George W. Bush nominated him to the powerful D.C. Circuit, where he has been a judge since 2006. His record since then has only confirmed the fears of those who opposed his highly controversial nomination.

Take the issue of whether a sitting president can be criminally indicted—a matter of some interest to Donald Trump. Kavanaugh wrote about this in a 1998 Georgetown Law Journal article entitled “The President and the Independent Counsel.” He described this as “a question that the Constitution does not explicitly address,” but he made his legal interpretation clear, urging Congress to make explicit that:

the President can be indicted only after he leaves office voluntarily or is impeached by the House of Representatives and convicted and removed by the Senate.

That is surely music to Trump’s ears, even though it strikes a dissonant note against accountability. As long as Republicans control Congress, Trump’s position is safe. They have built a cult of personality aroud their leader and demonstrated repeatedly throughout 2017 and 2018 that they will take no action to hold Trump accountable or limit the damage he is doing to our nation and our democracy. If there were a criminal indictment, Trump would challenge its constitutionality all the way to the Supreme Court, knowing he’d have Kavanaugh’s vote in the bag.

Indeed, Kavanaugh believes a president under investigation should be able to influence and even shut down the investigation. As a panelist at a Georgetown Law School symposium held in February of 1998, he stated:

At the same symposium, he told those in attendance:

If the President were the sole subject of a criminal investigation, I would say no one should be investigating that.

He stated that such a situation should only be addressed by Congress—an approach that we have seen is meaningless when those in control of Congress put the interests of their party leader over that of the nation.

Just a few years later, when the Bush White House was asserting unprecedented executive authority to ignore constitutional and statutory limitations in what they called the “war on terror,” they chose Kavanaugh to be a judge on the D.C. Circuit. Since 2006, he has not disappointed them, showing time and again his extreme view of executive authority.

For instance, in a 2011 case called Seven-Sky v. Holder, the D.C. Circuit upheld the Affordable Care Act over Kavanaugh’s dissent. Released less than a year before the presidential election, the dissent contained a footnote that would have given President Obama’s successor the authority to destroy the ACA even though it was federal law:

He had no majority opinion of the Supreme Court to cite in support of this extreme position, which Jeffrey Toobin sharply criticized:

That, to put the matter plainly, is not how it works. Courts, not Presidents, “deem” laws unconstitutional, or uphold them. “It is emphatically the province and duty of the judicial department to say what the law is,” Chief Justice John Marshall wrote in Marbury v. Madison, in 1803, and that observation, and that case, have served as bedrocks of American constitutional law ever since.

But if confirmed to the high court, Kavanaugh would be in a position to change that bedrock to fit his own—and Trump’s—vision of presidential power.

He applied that vision in 2016 in a three-judge panel decision in PHH Corp. v. Consumer Financial Protection Bureau, striking down the Consumer Financial Protection Bureau as unconstitutional—not a particular action by the independent agency, but the agency itself. The full D.C. Circuit subsequently vacated that ruling and rejected Kavanaugh’s interpretation of executive authority.

Since the creation of the Interstate Commerce Commission in the 19th century, Congress and the president have recognized the need for some agencies to be insulated from political pressure. They have created numerous independent agencies whose leaders are nominated by the president subject to Senate confirmation, but then not removable by the president without cause. Examples include the Federal Trade Commission, the Federal Reserve Board, the National Labor Relations Board and the Consumer Product Safety Commission. The Supreme Court long ago upheld this type of structure as constitutional.

The CFPB was created as part of the historic Dodd-Frank law and is led by a director with a six-year term who cannot be removed without cause. Kavanaugh wrote that the inability to fire the director infringed on the president’s authority to run the executive branch as he sees fit. While entities like the FTC have several commissioners, the CFPB’s leadership consists of one director. Kavanaugh concluded that this difference makes the Bureau violate the president’s executive authority even while multi-member commissions don’t.

As noted above, the full D.C. Circuit rejected this reasoning. But Kavanaugh’s dissent made clear his belief that all independent agencies are constitutionally suspect at best, Supreme Court precedent notwithstanding:

Because of their massive power and the absence of Presidential supervision and direction, independent agencies pose a significant threat to individual liberty and to the constitutional system of separation of powers and checks and balances.

And that precedent might not be long for this world if Kavanaugh were to be confirmed. He made that clear in his dissent:

As a matter of first principles, there would be a strong argument that this case could and should be resolved in PHH’s favor by the constitutional text alone — on the ground that independent agencies violate Article II. But Humphrey’s Executor [a seminal case on independent agencies] rejected that broad argument, and we as a lower court are bound by that case.

As a nominee, Kavanaugh is unlikely to come out and say that the president has the constitutional authority to fire any head of any agency, even if it was created to have some independence from political pressure. He is unlikely to state clearly that, in his view, no independence is permissible; that the president can remove an agency head (or use the threat to do so) to make the agency fully subject to his will—and his will alone.

But he doesn’t need to say it at his confirmation hearing. He has already told us.

It’s no wonder that Kavanaugh rose to the top of the list of individuals that Donald Trump wants to put onto the Supreme Court.

After the summit in Helsinki, during which Trump capitulated to Vladimir Putin, it has become absolutely clear how critical it is that any lifetime appointee to the Court be a check on his efforts to be unbridled from the law. But even before Helsinki, it was clear that our nation cannot afford to have Brett Kavanaugh on the Supreme Court.