Call the White House in 60 Seconds: People For Action of the Week
Skip to main content

Call the White House in 60 Seconds: People For Action of the Week 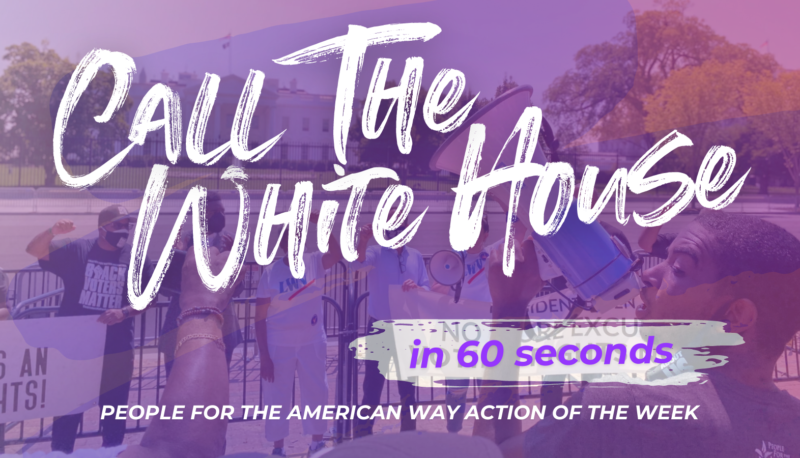 Stop the California Recall in 60 Seconds

Welcome to People For’s Action of the Week, where we give you one thing you can do this week to protect our democracy.

The Issue: We still need President Biden to urge the Senate to act on voting rights

Democratic Senators have reworked some of the most important parts of the For the People Act into a new bill: The Freedom to Vote Act. The Freedom to Vote Act will create an Election Day holiday, expand access to early voting and voting by mail, establish automatic voter registration nationwide, and stop partisan gerrymandering. It will also undo most of the more than 30 voter suppression laws passed this year, eliminate the outsize influence of Big Money in our politics, and so much more.

But, despite the popularity and necessity of the Freedom to Vote Act’s provisions, far-right Senate Republicans are already signaling that they’re going to block its passage. So we STILL need President Biden to use his bully pulpit to get Democrats together to fix or nix the filibuster in order to get the Freedom to Vote Act passed.

The Action: Call the White House and urge President Biden to act!

Call the White House comment line between 11 AM ET to 3 PM ET on Tuesdays, Wednesdays, and Thursdays and tell President Biden that he needs to protect the freedom to vote by urging the Senate to fix or nix the filibuster to get the Freedom to Vote Act passed. And we need him to do it now.

Click on or go to pfaw.org/CallWH right now for a sample call script and the number. Your call will make a huge difference in how President Biden proceeds!