Candidates Begin to Appeal to Voters’ Disappointment with Corporate Court

Republicans say they’re plotting to use any Supreme Court nomination battle to their advantage in November.

But polls show that the issue cuts strongly the other way—the American public is overwhelmingly concerned about the current Court’s pro-corporate sympathies and its failure to fully appreciate how the law affects individual Americans.

Within hours of President Obama’s announcement that he would nominate Solicitor General Elena Kagan to the Supreme Court, Illinois Senate candidate Alexi Giannoulias seized on that message in an email to supporters. Here’s a screenshot: 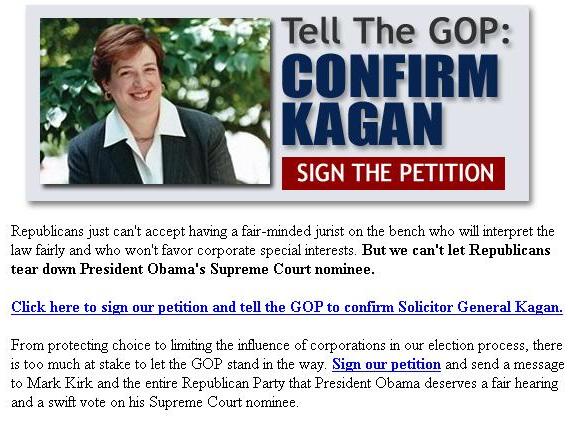 Giannoulias isn’t the first candidate to appeal to the public’s discomfort with the Court’s pro-corporate bent. Last month, now-Rep. Ted Deutch decisively won a special election in Florida, after running on a platform that included a Constitutional Amendment to reverse Citizens United v. FEC.

Citizens United, Ledbetter, and Exxon v. Baker have brought home the impact that the Court’s corporate leanings can have on all Americans. We’re expecting to see a lot more office-seekers raising these issues as November approaches.