Candlelight Vigils Held Across the Country as Part of January 6th: Day of Remembrance and Action
Skip to main content

Candlelight Vigils Held Across the Country as Part of January 6th: Day of Remembrance and Action

One year ago this month, on January 6th, 2021, America saw an attack on the Capitol, a violent insurrection against our country, our democracy, and our system of free and fair elections. This was not an isolated incident, but a culmination of months of The Big Lie, perpetuated by Donald Trump and a faction of Far Right elected officials, decrying non-existent voter fraud and a stolen election. This Big Lie continues to fuel voter suppression and election subversion efforts all across the country.

This past Thursday, one year after the insurrection, activists held candlelight vigils across the country to mark the violent and solemn day as well as call for vital legislation to be passed by Congress. 350 events took place across the nation, 300 vigils and 50 voter registration drives with over 31,000 registered attendees. There were also over 660,000 views on livestreams of selected events. People turned out in all kinds of weather, from single digit temperatures to snow to make sure their voices were heard.

At the flagship event in DC, People For the American Way President Ben Jealous co-emceed an hour-long program that featured remarks from Representatives Jamie Raskin, Pramila Jayapal, Veronica Escobar, Eleanor Holmes Norton and Senator Chris Van Hollen, as well as congressional staff who shared their first-hand experiences of the attack that day. At one point, the hundreds of attendees raised their candles for a moment of silence with the Capitol dome in the background, as the Baltimore Urban Inspiration Choir led a powerful rendition of “Amazing Grace.”

Organized by members of the Declaration for American Democracy and Not Above the Law coalitions, including People For the American Way, Public Citizen, and Sierra Club, among others, the vigils were a moment to come together. The promise of democracy is not a partisan issue, and the vigils were a moment to honor that idea and also to push for legislation that will shore up our democracy. Trump’s presidency and the Big Lie, culminating in Jan 6th, have shown us how vulnerable our institutions are, and we need President Biden and Congress to pass the Freedom To Vote Act, the John Lewis Voting Rights Advancement Act, DC Statehood Act, and the Protecting Our Democracy Act. 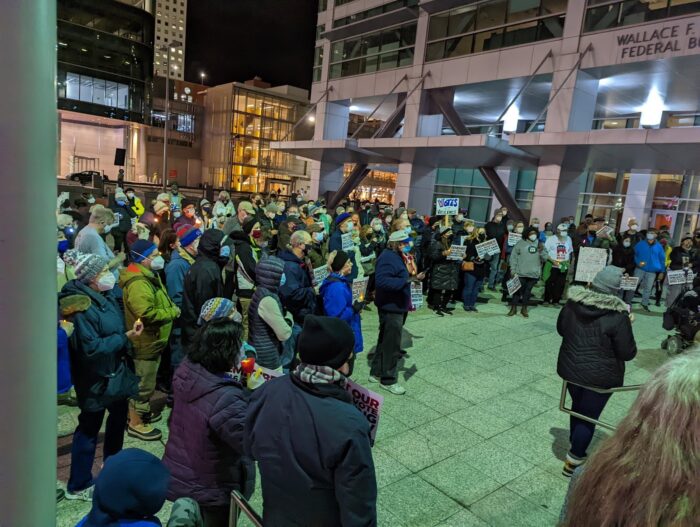 Each of these bills is vital in making sure we each can cast our vote and that our vote is counted. The John Lewis Voting Rights Advancement Act reinstates aspects of the 1965 Voting Rights Act that required federal review of state enacted voter restrictions; the Freedom To Vote Act limits voter suppression, ends partisan gerrymandering, limits the influence of dark money and prevents sabotage of future elections; the Protecting Our Democracy Act strengthens the guardrails against presidential abuse of power and restores fundamental checks and balances in our government; DC Statehood would end the more than 200 years of taxation without representation for the residents of Washington D.C. Each of these bills is an essential puzzle piece in realizing the United States as a true democracy that works for all Americans.

Accountability: An Insurrectionist Removed from Office