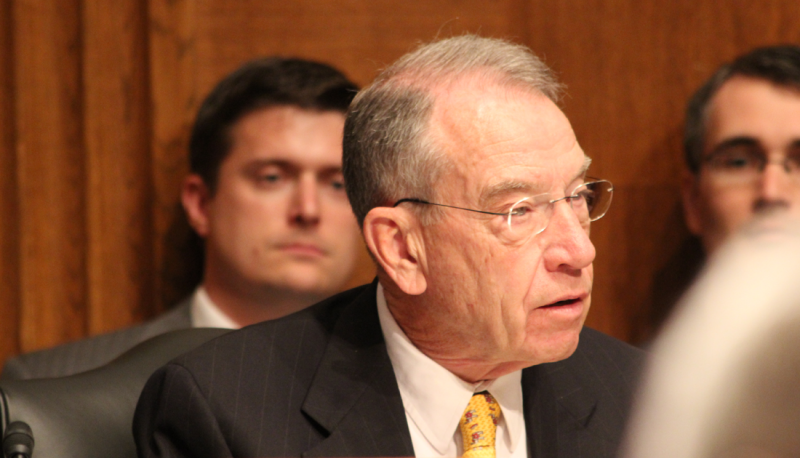 In 2015, Chuck Grassley became chairman of the Senate Judiciary Committee, which has the immense responsibility of carefully investigating the records of those nominated for lifetime positions as federal judges. Our judiciary exists to make sure that we are “a nation of laws, not of men” (to use the archaic sexist phrasing). Indeed, our liberty, safety, and democracy all depend on living under the rule of law.

Unfortunately, Grassley’s chairmanship has been guided by a different principle: might makes right. He is damaging not just the Senate, but also the entire federal judiciary.

Grassley applies one set of rules to Democratic senators and nominees of a Democratic president. But he does not apply them to Republicans. The routine and predictable shifting of the rules by those in power to favor their own side is not something one associates with a principled chairman—or with a healthy democracy.

The most recent abuse of power is Grassley’s abandoning of the blue slip principle he applied to President Obama’s judicial nominees: No nominee could get a hearing without the approval of both home state senators. In 2015, he proclaimed his fealty to this principle, stating that it leads to having “outstanding nominees.”  He made no exceptions, nor did he ever publicly entertain the notion of doing so, but instead declined hearings for a number of circuit and district court nominees.

Two years later, with a fellow Republican making the nominations, he has tossed the principle out the window, announcing a hearing next week on David Stras, nominated to a Minnesota seat on the Eighth Circuit Court of Appeals without the approval of both home state senators. The arguments he offers in his defense are full of holes big enough to drive a tractor through. But he has achieved his goal: he has reframed the withholding of blue slips from a principled mechanism for consensus and higher quality nominees (2015) into an illegitimate weapon being used for partisan purposes to keep quality nominees off the bench (2017).

Grassley has betrayed his obligation to run the committee consistent with the rule of law. Less dangerous but perhaps sadder is the personal betrayal: When Trump was elected, Grassley gave his committee colleague (and former chairman) Pat Leahy his word that he would not alter the blue slip policy. It turns out that his word isn’t worth much.

For those who have long disagreed with Chuck Grassley on policy but have respected and liked him as a person, this must be a disheartening revelation.

Grassley has been ensuring that Democrats don’t have time to adequately examine the records of many of Trump’s circuit court nominees. One way he has done this is by departing from the committee tradition of not having a confirmation hearing for more than one circuit nominee at a time without the minority party’s consent. Since federal circuit courts have such an enormous role in our judicial system, and since judges have lifetime tenure, extensive time and resources are needed to undertake a proper analysis of a circuit nominee’s record.

But when two circuit court nominees are up at the same time, senators don’t have time to effectively prepare for both of them: “Double-booking” prevents senators from carrying out their constitutional responsibilities.

That is why during the Obama administration, the Judiciary Committee under both Leahy and Grassley maintained the longtime norm of having only one circuit court nominee at the same hearing, even when there were several circuit nominees who were ready to proceed. Exceptions were made only three times during those eight years, each due to unusual circumstances and—importantly—with the consent of the minority Republican party.

But Grassley has already violated this norm as many times in Trump’s first year as occurred throughout Obama’s eight years. Predictably, he’s announced a fourth violation for December:

Given the extreme records and lack of qualifications of many of these nominees, it is no surprise that Grassley is violating committee norms to get them through as quickly as possible.

Another way Grassley has abused the chairmanship can be seen in how long it takes for him to hold a committee hearing. In 2015-2016, he made Obama’s circuit court nominees wait  long times—sometimes absurdly long times—for their hearings. But whatever pesky kinks in the pre-hearing research that slowed things down in the Obama era have magically disappeared in the Trump era.

Most egregiously, he waited seven months after Phil Restrepo’s nomination for the Third Circuit before finally having a committee hearing. Sen. Pat Toomey spent month after month refusing to return his blue slip, claiming he supported the nomination but was waiting for Grassley to finish the committee’s background investigation. It beggars belief that it really took seven months to investigate the record of a man who had just been fully investigated, vetted, and confirmed as a district court judge a mere year and a half earlier.

In comparison, Grassley has scheduled hearings for Trump’s circuit court nominees quite quickly:

The longest wait for a Trump circuit hearing (Larsen and Barrett) is the same as the shortest wait for an Obama circuit hearing under Grassley’s chairmanship. Grassley’s abuse of the chairman’s scheduling authority for Obama’s nominees needlessly dragged out the process and made it easier for Mitch McConnell to “run out the clock” and not hold confirmation votes for three of the five.

Grassley has held hearings for some nominees before the American Bar Association (ABA) has had a chance to report on its nonpartisan assessment of them. He rushed a hearing for district court nominee Brett Talley, resulting in committee members  not being able to ask him about the ABA’s subsequent unanimous conclusion that he is not qualified to be a judge. Grassley also announced the planned hearing date for Eighth Circuit nominee Steve Grasz of Nebraska before committee Democrats had the benefit of an ABA rating. In that case, the ABA released their evaluation before the hearing was actually held, so despite the chairman’s efforts, committee members were actually able to ask Grasz questions relating to his unanimous rating of “not qualified.” But it was only at a subsequently scheduled hearing that they could ask the ABA to explain how it was clear to them that the nominee is not qualified. (Only four nominees in the last quarter century have been deemed unqualified by a unanimous ABA panel. Two of them are Trump’s.)

Traditionally, when a majority of members of the ABA panel conclude that a nominee is not qualified, the chairman invites them to the hearing to explain their reasoning and be questioned about it. Grasz’s hearing came too late, so Grassley had them testify two weeks later. But he did it by tacking them on to a new, third panel at the end of a hearing that already had two circuit court nominees. Both Grasz and Talley have now been approved by the committee by party-line vote.

Chuck Grassley is no Pat Leahy. Leahy was chairman in George W. Bush’s last two years, and when Obama became president, he did not change committee policies or norms just to suit his political party. Chuck Grassley is in the exact same situation, but his response could not be more different from Leahy’s.

The Judiciary Committee bears a heavy responsibility to vet nominees and ensure that the third branch of government has judges who will protect the rule of law. But Trump is nominating people who would threaten the rule of law. To facilitate that takeover, Grassley has abandoned the committee equivalent of the rule of law, to get Trump’s judges on the bench as quickly as possible.