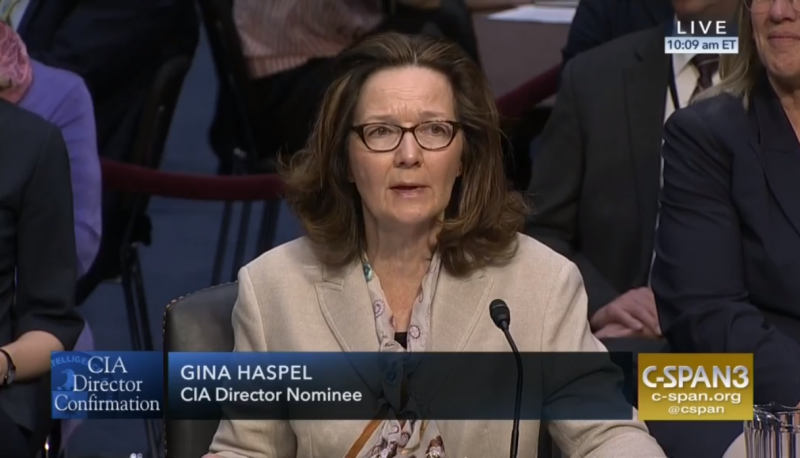 On April 17, President Trump nominated Gina Haspel to succeed Mike Pompeo as director of the Central Intelligence Agency following Pompeo’s move to the State Department. The Senate Intelligence Committee held Haspel’s hearing on May 9 and has scheduled her committee vote for May 16. As outlined in an opposition letter sent by People For the American Way and allied organizations, Haspel has reportedly supervised torture, facilitated its cover-up, and obstructed access to her record on these matters. Confirming Haspel would disserve both human rights and government transparency. You can download our letter here.

Dear Chairman Burr and Vice-Chairman Warner and Members of the Senate Select Committee on Intelligence,

The undersigned organizations write to oppose the Committee’s decision to move forward with a vote on whether to advance Gina Haspel’s nomination for CIA director given that Ms. Haspel is personally responsible for the near-total secrecy that continues to shroud her background. At this stage, with the Senate Select Committee on Intelligence scheduled to vote tomorrow, the CIA has not released sufficient information for the Senate to move Ms. Haspel’s nomination process forward, and as such her nomination should be rejected.

Already, Ms. Haspel’s nomination process has been muddied by the CIA’s campaign of selective disclosures. Senators on both sides of the aisle have made requests for more information on Ms. Haspel’s record to be released to the Senate and the public, including multiple bipartisan requests for the Durham Report, but their requests have been met with stonewalling as the agency instead has opted to release only information favorable to Ms. Haspel’s nomination.1 As you know, Senators Feinstein, Wyden, and Heinrich have joined Senator Warner in calling the level of declassification on Ms. Haspel’s record “unacceptable.”2

Exacerbating concerns that the Senate and the public have not been able to fairly consider Ms. Haspel’s nomination is the fact that during her nomination hearing before the Committee last week, Ms. Haspel admitted that she herself, as acting Director, is making decisions about which documents to declassify—a clear conflict of interest. At the same time, she refused to recuse herself.

Moreover, a news report published yesterday revealed that the Committee had restricted Senators’ access to a memo outlining minority SSCI members’ concerns about Gina Haspel’s nomination and highlighted the difficulty Senators have had accessing complete information on Ms. Haspel throughout the process.3 The Senate cannot fulfill its constitutional “advice and consent” responsibilities when the full Senate lacks meaningful access to all the documents relevant to the nomination, and when the public—whose job it is to hold their elected representatives accountable—remains largely in the dark.

Finally, it is troubling that the Committee will vote on Ms. Haspel’s nomination in a closed session. Given that this process has already given the public reason to believe that important information on Ms. Haspel’s record is still being kept secret, a closed vote further weakens the public’s trust.4

The Director of the CIA is an immensely powerful position. To vote on whether to advance Ms. Haspel’s nomination—behind closed doors and when so little information has been released to the public, and when the nominees has reportedly supervised torture, facilitated its cover-up, and obstructed access to her record on these matters—would be a disservice to the public and to congressional oversight of the executive branch. We ask that you reject this nomination.

Thank you for your attention to our request. For further information, please contact Lisa Rosenberg at Open the Government, lrosenberg@openthegovernment.org or 202-332-6736.