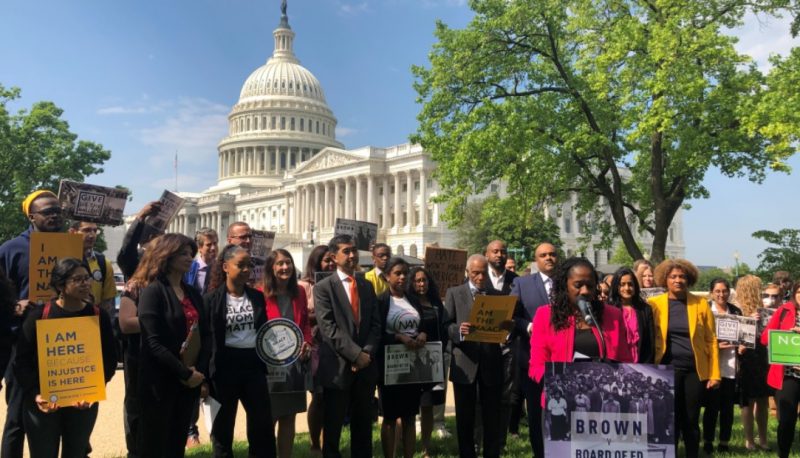 65 years After Brown v. Board, Trump Nominees Won’t Say It Was Rightly Decided

May 17 marked the 65th anniversary of Brown v. Board of Education, a landmark decision by the Supreme Court that ended racial segregation in public schools and “separate but equal” as the law of the land. Codifying desegregation marked a turning point in our nation’s history, and signaled the role of the judicial branch in realizing the American promise of equality for all when the other two branches of government failed to act.

.@KristenClarkeJD: “The Court’s unanimous 9-0 decision was a call to action and its legacy should guide us today.” #GiveUsTheBallot #BrownvBoard #65Years pic.twitter.com/TkdOaM7FKS

Sadly, today under President Trump’s agenda to stack the courts with right-wing extremists, bedrock principles of the judiciary we have taken for granted must now be scrutinized and fiercely defended. After years of judicial nominees openly and enthusiastically promising to uphold the ruling in Brown during their confirmation hearings in the Senate, many of Trump’s judicial nominees have created a new norm of refusing to answer whether the decision was correctly decided. Unfortunately, many of these judges have already made it to the federal bench, and many more are in the nomination pipeline— testing the judiciary’s commitment to upholding equality and proving the fight for racial justice is far from its finish line.

.@SenSchumer: “When Donald Trump nominates judges who can’t even say if Brown was correctly decided, our work must continue.” #GiveUsTheBallot #BrownvBoard #65Years pic.twitter.com/OMvAugWbaF

In the trenches of the fight to protect this decision and the moral standards of our government are a number of leaders in the racial justice movement, many of whom met on May 16 on Capitol Hill to commemorate Brown and discuss the ongoing racial justice challenges in public education and American society generally. Along with PFAW, groups who attended included the NAACP Legal Defense and Educational Fund, the Leadership Conference on Civil and Human Rights, the National Women’s Law Center, and the Lawyers’ Committee for Civil Rights Under Law.

.@Sifill_LDF Explaining that judges who cannot unequivocally state that Brown was correctly decided have no business on the federal bench. #GiveUsTheBallot #BrownvBoard #65Years pic.twitter.com/O6BgdA67bM

The first speaker, Sherrilyn Ifill from the NAACP Legal Defense and Education Fund, discussed how racism has adapted to different threats in modern times. She explained that systemic voter suppression is one of the greatest threats our democracy is facing today and how the internet is being used as a weapon of radicalization, noting that Russia capitalized on racial tensions to stoke fears during the 2016 election. She also stated that judges who fail to unequivocally affirm the ruling in Brown have “no business on the court,” and suggested that our standards for senate confirmation have indeed fallen under Trump.

.@Sifill_LDF: “Today we face voter suppression, not just in the south but throughout the country.” #GiveUsTheBallot #BrownvBoard #65Years pic.twitter.com/gluda23S8t

Rep. Veronica Escobar, D-Texas, spoke about how contemporary segregation in public education takes many forms, describing how “the resources available to brown children on the border are very different than the resources allocated to white children in central Texas.” Vanita Gupta from the Leadership Conference on Civil and Human Rights expanded on this point, explaining how systemic oppression manifests itself in many ways, noting that the judicial branch should be held to the highest standards of morality and that turning back this “moral floor” would have devastating consequences for all Americans.

.@vanitaguptaCR: “There has to be a moral floor for these lifetime appointments to the federal judiciary.” #GiveUsTheBallot #BrownvBoard #65Years pic.twitter.com/365xOtRtbX

Senate Democratic Leader Chuck Schumer, D-N.Y., made the point that courts have always acted as a moral beacon when legislators have refused to act and explained that certain Trump judges have set a new low of unprecedented extremism. Fatima Gross Graves of the National Women’s Law Center called out recently confirmed Trump judge Wendy Vitter for starting this trend of refusing to affirm the Brown decision, and urged everyone in the crowd to take these issues seriously.

.@SenSchumer: “The judges they are putting on the bench are not just conservative, they are despicable and narrow-minded.” #GiveUsTheBallot #BrownvBoard #65Years pic.twitter.com/HgDdxOcwsa

Finally, Sen. Richard Blumenthal, D-Conn., who has regularly been asking judicial nominees if they would uphold the ruling in Brown, spoke about how nominees, judges and Supreme Court justices in the past had always defended the ruling. When he started asking the question again, he “naively” assumed it would be an easy one to answer. He stated that undermining this ruling is “a betrayal of the principles that are at the core of our democracy,” and urged his fellow senators to start reflecting on what damage this attitude could have if these judges continue to be confirmed to lifetime appointments on the federal bench.