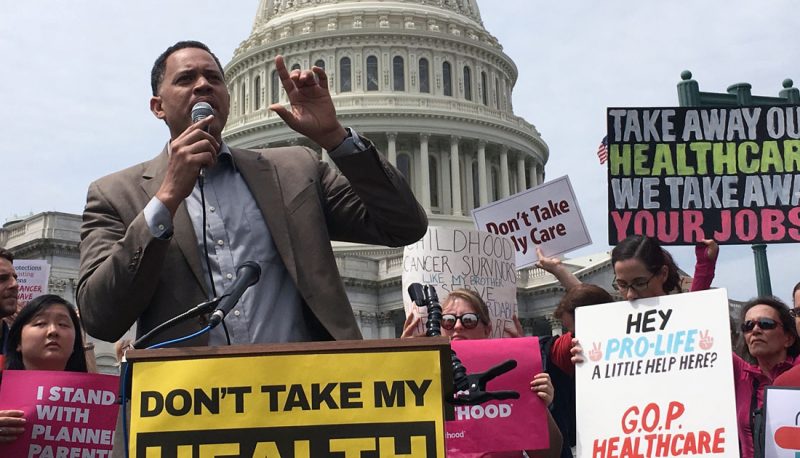 Recent reports suggest that senators will vote by the end of June to repeal the Affordable Care Act, after hiding the negotiations from the watchful eyes of their constituents. For marginalized and vulnerable communities, the reason for their secrecy is clear.

People For the American Way is among the 150+ civil rights organizations that are saying NO to the so-called American Health Care Act:

Repealing the ACA, and restructuring and reducing the financing and coverage of Medicaid as proposed by the American Health Care Act (AHCA), would leave at least 23 million people in the United States, particularly people of color and underserved populations, significantly worse off than under current law. The ACA and Medicaid are critical sources of health coverage for America’s traditionally underserved communities, which our organizations represent. This includes individuals and families living in poverty, people of color, women, immigrants, LGBTQ individuals, individuals with disabilities, seniors, and individuals with limited English proficiency.

The ACA has reduced the number of people without insurance to historic lows, including a reduction of 39 percent of the lowest income individuals. The gains are particularly noteworthy for Latinos, African Americans, and Native Americans. Asian Americans, Native Hawaiians and Pacific Islanders have seen the largest gains in coverage. The nation and our communities cannot afford to go back to a time when they did not have access to comprehensive, affordable coverage. Further, due to the intersectionality between factors, such as race and disability, or sexual orientation and uninsurance, and issues faced by women of color, many individuals may face additional discrimination and barriers to obtaining coverage. Proposals to replace the ACA with high-risk pools, Health Savings Accounts, or “cheaper” insurance plans that do not offer comprehensive, affordable benefits are unacceptable.

PFAW and this civil rights coalition also stand united against the secrecy of the repeal process:

We are seriously concerned about the lack of transparency of the discussions taking place to develop this legislation. After more than seven years and 60 votes to repeal the ACA, there is no excuse for forcing consideration of this bill without adequate time for analysis, hearings, and discussion of a CBO score, providing ample opportunity for the public to understand the proposed legislation and participate in this discussion in which their very access to health care for themselves and their families is at stake.

The ACA has served as a lifeline for millions of LGBTQ people who too often have found themselves cut off from critical healthcare services. Prior to implementation of the ACA, LGBTQ people had some of the lowest insured rates of any population in the country. The individual market reforms, including the ban on preexisting condition exclusions, have made it possible for many in our community to obtain health insurance for the first time in their lives. For many people living with HIV, as one example, this particular reform has made insurance affordable and treatment accessible . . .

The American Health Care Act will have a detrimental impact on the positive trend of health coverage for LGBTQ people and so many other vulnerable populations. The Congressional Budget Office has projected that the provisions of the legislation will result in 14 million Americans losing their health insurance by 2018. That number skyrockets to 23 million by 2026. These projections foreshadow an unacceptable growth in the uninsured rate and an equally unacceptable exacerbation of healthcare disparities.

As did the civil rights community, our LGBTQ allies are calling out the bill’s attack on Planned Parenthood:

The provision barring Planned Parenthood and its affiliated clinics from participating in essential public health programs goes beyond the parameters of the ACA. This will jeopardize the ability of these providers to deliver preventive healthcare services, such as cancer screenings and STD and HIV testing, as well as services like gender transition-related care that may not be offered elsewhere in many communities. Often, health centers such as Planned Parenthood offer the only culturally competent healthcare available to LGBTQ people, especially in rural and isolated areas.

This is part of PFAW’s commitment to resist Trump and advance a pro-equality agenda.