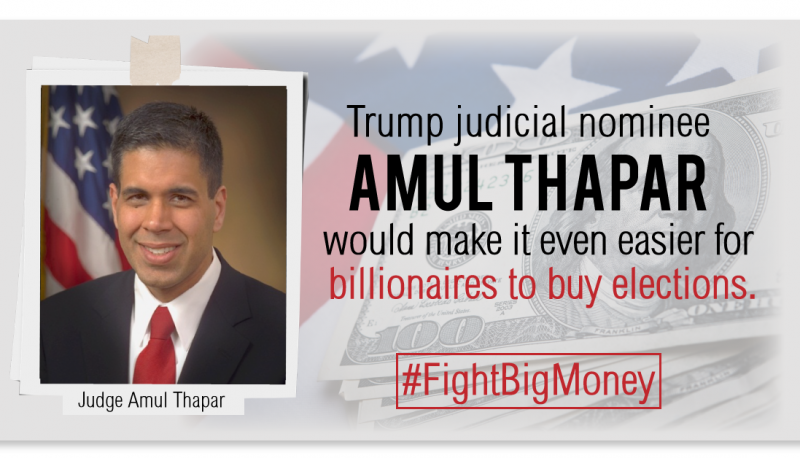 Yesterday a letter signed by 24 organizations was delivered to the Senate Judiciary Committee, which today approved the nomination of Judge Amul Thapar, President Trump’s pick to fill a seat on the 6th Circuit Court of Appeals on a party line vote.

In addition to being a co-author and signatory of the letter, PFAW delivered more than 25,000 petition signatures asking senators to reject this nomination given Thapar’s troubling views on the issue of money in politics. Judge Thapar has gone beyond the Supreme Court’s directives in his antagonism toward rules governing the financing of political campaigns, raising alarm among groups advocating for equality in our electoral process.

Much of the problem of big money in politics has been made possible by the Supreme Court, accelerating under Chief Justice John Roberts. For more than four decades, the Supreme Court’s flawed approach to money in politics has gutted common-sense measures to protect our democracy from the undue influence of special interests and wealthy individuals.

Survey after survey shows that Americans believe that there should be less money in politics. Judge Thapar is set to take us further in the wrong direction.

You can read more in PFAW’s own letter on the Thapar nomination.