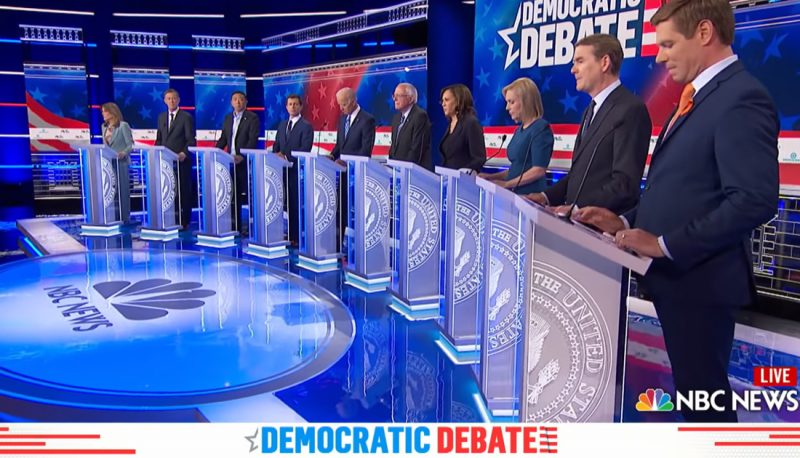 For the People Act Passes the House

Americans across the country are calling for fundamental reforms to our democracy—to create a political system that works for everyone, not just the privileged and the powerful. Following the 2018 midterms, the new House of Representatives under Democratic control responded by passing the For The People Act, the most sweeping democracy reform package in decades.

People For the American Way and our allies in the Declaration For American Democracy coalition are now working to ensure that 2020 presidential candidates prioritize these reforms during the debates and on the campaign trail. As part of that effort, on August 20, we sent a letter to the Democratic National Committee calling for an official debate on democracy reform.

Thank you for the Democratic National Committee’s (DNC) commitment to a robust debate process that gives candidates the opportunity to speak directly to Americans about their visions for our country’s future.

This spring, the House of Representatives passed the For the People Act, a groundbreaking democracy reform package that will tear down barriers to the ballot box, end the dominance of big money in politics, and curb the culture of corruption in Washington, D.C. In a first time move for a reform package of this scope, every House Democrat and every Senate Democrat co-sponsored the historic legislation. Their support was reinforced by the Declaration for American Democracy, a broad coalition of more than 130 organizations dedicated to fixing our broken democracy. Each organization has its own priorities, whether environmental, reproductive health, working families, or something else, but they came together because they recognize that we cannot effectively address those issues without first addressing our broken political system.

In May, over 100 organizations signed a letter to every presidential candidate demanding they release comprehensive plans to strengthen and expand access to our democracy:

“In addition to proposing a specific, bold platform to combat corruption and strengthen and expand our democracy, we want to know how you’ll champion these reforms on the campaign trail. We’d like to hear how you’ll make your democracy revitalization plan a central part of your campaign and build support for these policies. If elected, this platform’s enactment must be your first priority in 2021.”

Many candidates have responded to this call, releasing bold plans to ensure every voice can be heard in our political system. Seven have said fixing our democracy will be their first priority if elected.

Unfortunately, despite this momentum, through the first four debates, not one question about these issues has been asked. Americans deserve direct questions on the matter to spur a real debate on how we’ll strengthen our democracy.

If the DNC reconsiders its decision to allow debates on the individual critical issues facing the country today, the undersigned organizations believe holding one on candidates’ democracy reform plans is essential. After all, whether it comes to addressing our climate crisis, lowering the cost of prescription drugs, ending gun violence, or any other issue Democratic candidates have been talking about on the campaign trail, the role of a healthy democracy in achieving those ends is undeniable.

As the May letter stated, “Americans are looking for leaders who will take on our broken, entrenched campaign finance system, and who are committed to guaranteeing the absolute right of all eligible Americans access to the ballot. Your leadership and commitment to action on these issues will show voters across the country that, like them, you believe our democracy works best when it represents everyone, not just those able to unduly influence policies based solely on their power and their wealth.”

Candidates should be given an opportunity to explain not only their policy proposals but their plans for implementing them and a DNC-sanctioned debate on democracy reforms is the perfect opportunity to do just that. We look forward to hearing from you.