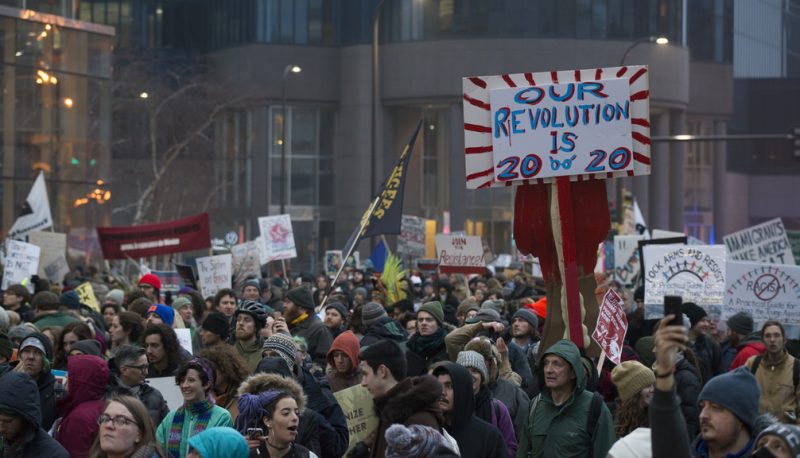 Last week brought the disturbing news that Sessions’ Justice Department attempted to serve a search warrant on DreamHost and force the web hosting platform to turn over the IP addresses of everyone who visited DistruptJ20.org, along with emails and unpublished content associated with DistruptJ20’s account. DisruptJ20 is the group that organized the mass protests in response to Trump’s inauguration in which over 200 activists were arrested. The Electronic Frontier Foundation called this an unconstitutional overreach, and The New York Times wrote in an editorial that it’s a dangerous way to conduct an investigation.

Thankfully, following a loud outcry—including a petition from People For the American Way—DOJ relented on Tuesday, disingenuously claiming that it didn’t have any interest in the IP addresses in the first place. But plenty of constitutional concerns remain with what DOJ is asking for in this case. As it moves forward, PFAW will continue to send the strong message that the resistance—YOUR resistance—will not be stopped by the overreaches and scare tactics employed by Trump, Sessions, and the Justice Department.

PFAW today joined more than 60 organizations, led by OpenTheGovernment, on a letter that expresses our remaining concerns over the legality and appropriateness of DOJ’s DisruptJ20 warrant.

Two days before a scheduled hearing on the case, the Department narrowed its demand for information related to the website. In a new court filing, federal prosecutors dropped the request for visitor logs and narrowed the timeframe for part of the demand from July 2016 through Inauguration Day. But there remain significant Fourth and First Amendment issues. The warrant the government now seeks would still force DreamHost to disclose the IP addresses and content of email inquiries and comments submitted from numerous private email accounts associated with the website, not limited to information related to the individuals under investigation. The information yielded by this demand could allow the government to identify individuals engaged in constitutionally protected speech and dissent, as well as members of the news media and the public who simply participated in meetings or communicated with organizers whose email accounts are affiliated with the J20 website.

Furthermore, given that the government narrowed the scope of its demand only after DreamHost challenged the warrant in court, resulting in widespread public outcry and objection from privacy and civil liberties groups, questions remain over whether similar warrants exist that are not receiving the same level of public scrutiny generated by the DreamHost case. In addition, the Department maintains that its initial request was legal and appropriate, raising concerns that the Department might seek similar warrants in the future.

Taking a strong stand on DisruptJ20 is important, because this fight is about more than just a single website. After all, who will Trump, Sessions, and the Justice Department come after next? This is about an entire movement standing up for activists like you who depend on a strong Constitution to protect you when you take to the streets to make your voices heard.

As PFAW, OpenTheGovernment, and others put it in our letter: