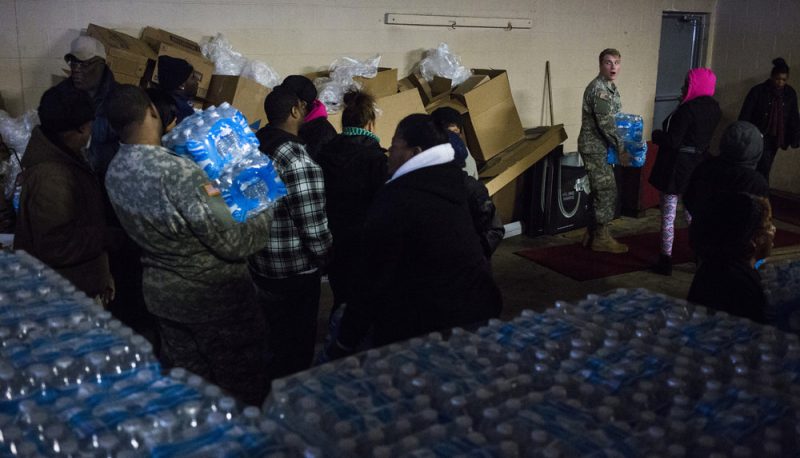 A long line of residents form to pick up bottled water at a Flint, Mich. fire station on March 5, 2016. Residents were only allotted two cases per a family at a time. (Photo by Brittany Greeson)

Four Trump Sixth Circuit judges on the Sixth Circuit Court – Judges Amul Thapar, Joan Larsen, John Nalbandian, and Eric Murphy – joined a May dissent in Guertin v. Michigan that would have reversed a three-judge panel decision that allowed Shari Guertin to go forward with her claims against Flint officials concerning lead-poisoned water. The dissent would have dismissed the complaint as a matter of law without allowing any discovery, even though the officials’ actions have left residents “to this day” without safe drinking water.

On behalf of herself and her daughter, Ms. Guertin sued both state and city officials for poisoning Flint’s water with lead, which she contended caused serious injury when they unknowingly drank and bathed in the contaminated water. The district judge dismissed claims against state officials but allowed Guertin to proceed to uncover more facts with respect to her claims against Flint officials, determining that their actions appeared “so egregious as to shock the conscience.” A three-judge panel agreed that the case could proceed, but Flint officials tried to get the entire Sixth Circuit to rehear the case.

A majority of the 16 judges on the Sixth Circuit denied the rehearing petition, but Trump judges Thapar, Larsen, Nalbandian, and Murphy joined a dissent by Judge Raymond Kethledge that tried to vacate the panel decision and rehear the case. The dissent claimed that the Flint officials were entitled to immunity from Ms. Guertin’s complaint regardless of the facts. As Bush appointee Judge Julia Smith Gibbons pointed out in concurring in the denial of rehearing, however, “it is better to find out what facts will eventually be before the district court,” and that deciding any issue other than whether the facts alleged could plausibly state a claim for relief “would be judicial overreach.”