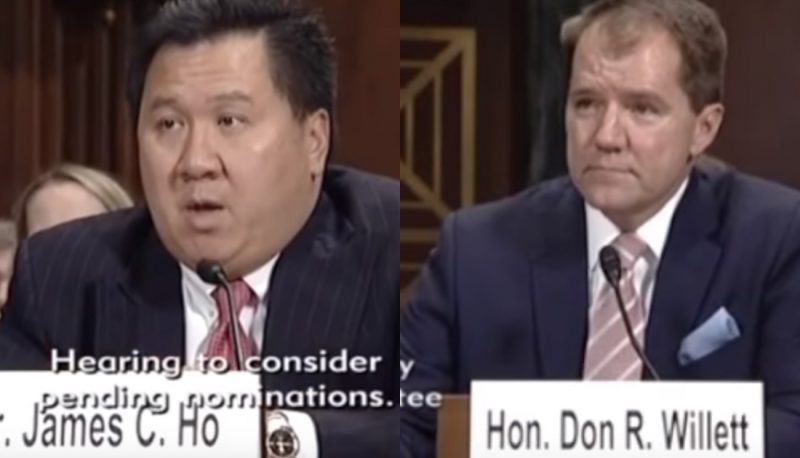 In September 2018,  the majority of the full Fifth Circuit, including Trump nominated Judges James C. Ho and Don R. Willett, dismissed a civil judgement in favor of a person who was declared “actually innocent” after the city failed to disclose evidence that would have proven his innocence and he was kept in prison for four years.

In George Alvarez v. The City of Brownsville, Alvarez, a 17-year-old ninth-grade student who receives special education services in Texas, was arrested for suspicion of public intoxication and burglary of a car. While he was confined, an altercation with a prison official occurred and Alvarez was charged with assault. Although videos were taken of the incident, they were not disclosed to Alvarez and, faced with the likely testimony of prison officials against him, he pleaded guilty after plea negotiations.

After being imprisoned for about four years, however, the videos of the encounter surfaced in an unrelated case. Upon becoming aware of the videos, Alvarez filed for a writ of habeas corpus in Texas state court, claiming the Brownsville Police Department withheld the videos in violation of the Supreme Court case, Brady v. Maryland, which requires that evidence that could prove someone’s innocence (“exculpatory evidence”) be disclosed to a defendant. The state district court recommended a new trial for Alvarez. In the new trial, Alvarez was declared “actually innocent,” and the charges against him were dismissed altogether.

Alvarez sued the City of Brownsville for civil rights violations and nondisclosure of exculpatory video evidence in violation of Brady. The district court granted Alvarez summary judgment, and a jury awarded Alvarez $2,300,000.  The City of Brownsville appealed, and a majority of the full Fifth Circuit, including Ho and Willett, threw out the $2,300,000 judgement and concluded that Brady did not apply because, they claimed, a Brady violation is not established when material is not shared during the plea deal process.

Three judges vigorously dissented. There was simply no good reason, one pointed out, why the federal  constitutional right of a defendant to exculpatory evidence should not apply during the plea bargaining stage. As Judge Gregg Costa explained,  “it is difficult to think of greater deprivations of liberty than the government’s allowing someone to be held in prison without telling him that there is evidence that might exonerate him.”