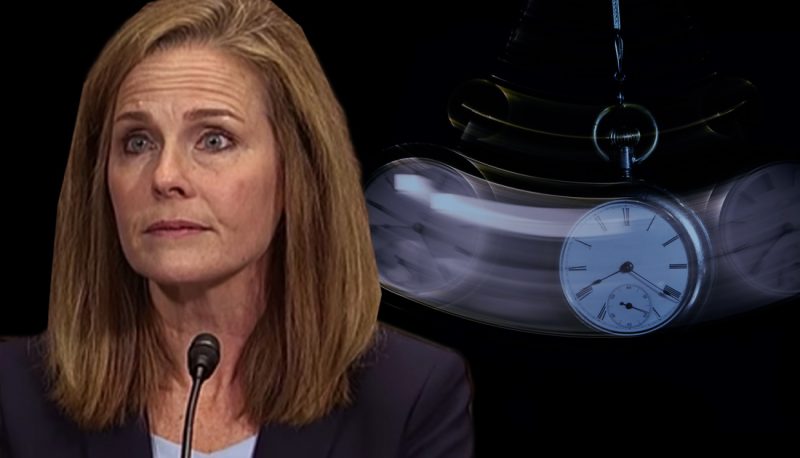 In February 2019, Trump Seventh Circuit Judge Amy Coney Barrett dissented from a decision written by Republican appointee William Bauer in Sims v. Hyatte that Mack Sims, who had been imprisoned for 20 years for allegedly shooting a security guard, should get post-conviction relief when it was discovered that the prosecution deliberately concealed the fact that the key eyewitness against him had been hypnotized to improve his memory. Although Barrett agreed that the “suppressed evidence of hypnosis undermined confidence in the verdict,” she claimed that the court should have deferred to an Indiana appeals court that had denied any post-conviction relief to Sims.

In late 1993, Indiana prosecutors charged Mack Sims with shooting a security guard, Shane Carey. At trial, the prosecution “relied almost exclusively” on Carey, “the only witness who could possibly identify the shooter” given the facts on the night of the shooting, in order to “establish their case against Sims.” Although Carey was unequivocal in identifying Sims as the shooter at trial, Sims’ defense attorney tried to cast doubt on his testimony by questioning him about an early instance when Carey was shown only Sims’ picture, another time when Carey was “unable to identify the assailant in a photographic lineup,” the “subdued” lighting at the scene, and “inconsistencies” in Carey’s early description of the assailant. Sims was nevertheless convicted, sentenced to 35 years in prison, and did not prevail on appeal.

Sims later filed for post-conviction relief and learned for the first time, at an evidentiary hearing in 2012, that Carey had been hypnotized months before the trial and, according to one witness, clearly identified Sims “only after hypnotism.” Indiana courts nevertheless denied post-conviction or habeas corpus relief, finding that the suppression of evidence was not “material” since there was some evidence of pre-hypnosis identification, that the state showed that Carey’s in-court identification of Sims was independent and unequivocal, and that since Sims’ lawyer had cross-examined Carey on the identification issue anyway, there was not a “reasonable probability” that disclosing the hypnosis before trial would have changed the outcome of the jury verdict. A federal district court denied habeas corpus relief on similar grounds.

In an extensive 25-page opinion by Judge Bauer, the Seventh Circuit reversed. Judge Bauer explained that the state courts’ conclusion that the suppression of the hypnosis evidence was not material to Sims’ conviction was “contrary to” and an “unreasonable application of clearly established federal law.” He noted that the Supreme Court had “clearly established that strong and non-cumulative impeachment evidence related to an important trial witness is material” under the law. Even though the Indiana appellate court agreed that evidence from a hypnotically-enhanced witness is “inherently unreliable,” Bauer went on, the state court “went astray” by focusing on whether the testimony was admissible, not on the “potential effects on the outcome of the trial” if the facts of the hypnosis had not been suppressed and were available to Sims’ lawyer at trial. Based on Supreme Court precedent and other material concerning the unreliability of witnesses who had been hypnotized, Judge Bauer noted that Carey’s testimony would have been subjected to “withering cross-examination” and could well have affected the outcome of the trial.

Judge Barrett nevertheless dissented, arguing that the majority should have deferred to the Indiana court’s conclusion that Carey’s identification “never wavered.” But as the majority explained, Barrett’s attempt to “assail our opinion” failed to refute the conclusion that Supreme Court and other precedent “show beyond reasonable dispute that the prosecutor’s deliberate concealment of the hypnosis evidence” warranted post-conviction relief.