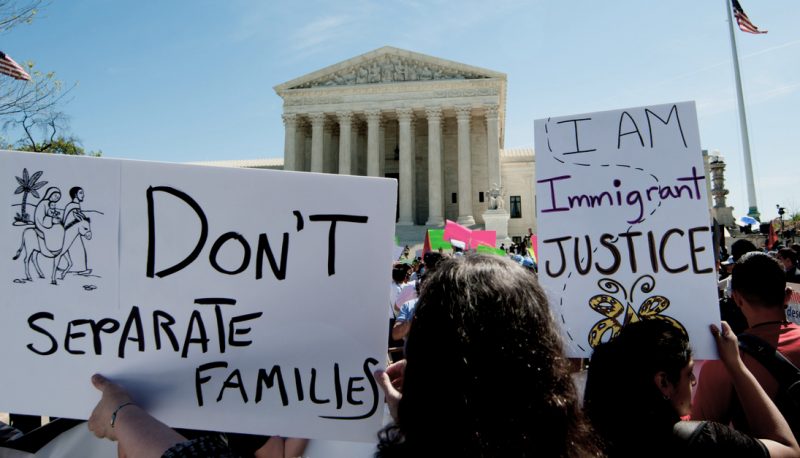 Trump Supreme Court Justices Brett Kavanaugh and Neil Gorsuch cast the deciding votes and voted with the majority in a 5-4 Court decision in March 2019 that ruled that under federal law, immigrants who have been released after committing even minor crimes should be picked up even years after their release and detained indefinitely pending possible deportation hearings. The ruling applies even to legal immigrants who have been in this country for decades. Justice Stephen Breyer wrote a dissent joined by the Court’s moderate justices that explained that the majority had misinterpreted the law, and that such detention contradicted “basic” American values and could lead to constitutional problems in some cases.

Nielsen v. Preap concerned a federal law that provides that immigrants who have committed crimes should be detained without bail for possible deportation “when” they are released from prison. The Ninth Circuit had ruled that “when” means shortly after their release, and that the government could not pick up and indefinitely detain immigrants who had served their sentences years or even decades ago, as has occurred in some cases under the Trump administration.

In a 5-4 opinion by Justice Alito, the Court majority reversed and held that the indefinite detention provision applied to all immigrants, even legal immigrants who had committed minor crimes long ago. Alito claimed the ruling was dictated by the plain language of the law, and it was better that such detentions be carried out “late than never.”

Justice Breyer strongly disagreed. He explained that the language and structure of the law, as well as principles of statutory interpretation, mean that “when”  means  “at the time” or “just after” release, or “within a reasonable time,” such as six months. The majority’s indefinite interpretation, he explained, means that individuals can be detained “years” after their release and after they “have established families and put down roots in the community.” Nevertheless, under the majority’s  view, they can be imprisoned for “months, sometimes years, without the possibility of release,” even though they committed only “minor crimes” like minor drug offenses and “illegally downloading music,” and may well not be deported at all because they can receive “relief from removal.”

Breyer pointed out that these were not  “mere hypotheticals” because of what has actually happened to a number of individuals, and that the majority’s view would create “serious constitutional problems” in some cases. He specifically disagreed with Kavanaugh’s claim in a concurring opinion that the opinion was “narrow,” and concluded instead that it “will work serious harm to the principles for which American law has long stood.” More information about the case is available in PFAW’s Supreme Court term preview.