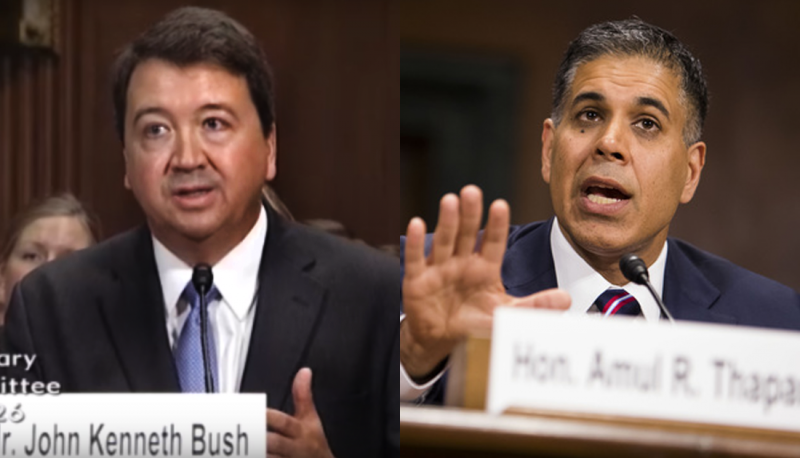 Trump Sixth Circuit Judges John Bush and Amul Thapar recently affirmed a trial court decision that granted summary judgment against a claim that doctors in a Michigan prison were deliberately indifferent to a prisoner’s complaints of liver and related problems that caused severe pain and contributed to his death. This was despite a strong dissent by Judge Karen Nelson Moore that the prisoner’s brothers, who continued the case after their brother had died in prison, had produced enough evidence to present their claim to a jury to decide.

In the case, Rhinehart v. Scutt, Kenneth Rhinehart had filed suit against officials and doctors at a Michigan state prison complaining about what Judge Moore called the treatment that “he did – and did not – receive” for painful liver disease while a state prisoner. After a number of episodes of hospitalization and significant pain, Rhinehart died while in prison several years after he filed suit under the Eighth Amendment. His brothers Lewis and David then took over the case, in which extensive medical and other discovery took place. The district court granted summary judgment against the Rhineharts, ruling that there was not enough evidence to take the case to a jury and that the doctors and officials were entitled to judgment as a matter of law. The case was then appealed to the Sixth Circuit.

In a 2-1 decision, Judge Bush joined by Judge Thapar affirmed the district court decision. All three judges agreed that in order to prevail under the Eighth Amendment, a prisoner must prove that doctors or officials showed “deliberate indifference to a prisoner’s serious illness or injury,” with the majority noting that there was a “paucity of evidence” on the Eighth Amendment and prisoners during the Founders’ era because imprisonment “was not a typical form of punishment” during that time. The majority went on to summarize the evidence below and concluded that “a reasonable jury could not find” that the Rhineharts could meet the Eighth Amendment standard and thus agreed with the district court.

With respect to claims against two doctors involved in treating Rhinehart, however, Judge Moore strongly disagreed and dissented. One doctor, she explained, had failed to ensure that Rhinehart was monitored by a specialist after he was initially hospitalized for his liver disease. While he was in the hospital, Rhinehart had been treated for several specific complications of liver disease that can cause pain and death, and the hospital doctor recommended that after he was discharged, he should be monitored occasionally and treated as necessary by a specialist concerning these complications. Based on the evidence, Moore explained, a reasonable jury could find that the failure to refer Rhinehart to such a specialist for this purpose “deprived” him of the opportunity to be monitored for “grave risks,” and that later medical crises that he suffered “could have been avoided” by such monitoring. Based on the evidence, Moore went on, the prison doctor effectively “did nothing” after learning of Rhinehart’s problems after he returned from the hospital, therefore allowing a jury to conclude that he was “deliberately indifferent” to Rhinehart’s medical needs. Although Moore acknowledged that a jury could well have found for the doctor despite the evidence, “I do not see why,” she stated, the appellate court should draw that conclusion as the majority did, rather than having the jury perform that important fact-finding function.

Moore also thought that a jury should determine whether a second doctor violated the Eighth Amendment standard for failing to order a procedure called TIPS after Rhinehart was later hospitalized again and suffered severe pain. Based on the evidence, she explained, a reasonable jury could well find that the doctor knew that the procedure would have “prolonged and improved” Rhinehart’s life and helped avoid severe pain, but that the doctor “purposefully disregarded a known risk” in failing to provide the treatment.

Moore concluded by noting that it “may be tempting to some” to “minimize the decency that is due” to prisoners with serious medical conditions. “But the Eight Amendment obligates us,” she explained, “to take our commitments to those who cannot provide for their own medical care seriously.” Unfortunately that lesson was lost on Judges Bush and Thapar, who formed the majority in the Rhinehart case.