Happy New Year! Well, for most of us it should be — unless you are fighting to protect our courts. New year, same old tactic by conservatives, who are hoping to insulate narrow-minded judicial nominees from scrutiny by smearing people who ask critical questions about their records and rhetoric.

This dishonest “religious bigotry” strategy has been around as long as the organized effort to shift the federal judiciary to conservatism and reverse decades of precedent that protect Americans’ legal and constitutional rights. In the recent past, for example, these groups have charged some Catholic senators with wanting to keep Catholics off the federal bench.

The latest smear is being pushed by the notoriously right-wing editorial board of the Wall Street Journal, which has run an attack on Senators Kamala Harris and Mazie Hirono. The Journal’s editorial is an over-the-top response to written questions submitted by Sens. Harris and Hirono to federal court nominee Brian Buescher about his commitment to upholding legal equality for LGBTQ Americans and American women’s legal right to abortion.

In their questions, the senators noted Buescher’s long-time membership in the Knights of Columbus, a Catholic fraternal organization that does much laudable charitable work, but which was also a top funder of anti-marriage-equality efforts and supports restrictions on federal family-planning funds. Before the 2016 election, the group’s influential leader declared that Catholics cannot vote for candidates who support abortion rights.

Given these facts, the senators asked Buescher whether he could assure litigants that he would deal with these issues fairly and impartially as a federal judge. (Buescher’s answer stated that while he had run for political office as a “pro-life candidate,” as a judge he would “faithfully apply all United States Supreme Court and Eighth Circuit Court of Appeals precedent on all issues, including Roe v. Wade” and Obergefell.)

The Journal’s editorial board responded to the senators’ reasonable line of questioning with outrage and horror. By seeking to protect LGBTQ equality and reproductive rights, and asking questions about the Knights’ public policy positions, the editorial implied, Sens. Harris and Hirono were resurrecting the kind of anti-Catholic bigotry directed at John F. Kennedy and earlier presidential candidate Al Smith. The editorial said the questions were part of a “distressing pattern” that seeks to “banish” religious people from public life — the kind of false charge Religious Right groups have often leveled to deflect criticism of their political agendas or tactics.

This is not only absurd, but an insult to American voters.

The Journal also gave space to conservative African American pastor Eugene Rivers to repeat the charge, saying that the senators’ questions were “about silencing believers of any kind whose views differ from the progressive view on social issues.” He unbelievably suggested that opponents of Buescher’s confirmation would be voting to deny his chance to be a public servant based on his baptism in the Catholic Church.

These inflammatory charges are designed to create distraction. It is not only acceptable, but necessary for senators to explore whether a nominee for a powerful lifetime job as a federal judge will uphold every Americans’ rights. In the case of Buescher this is doubtful, given that as an unsuccessful candidate for attorney general of Nebraska, he said he did not believe LGBT Americans should be protected by anti-discrimination laws the way people are protected from racial or ethnic discrimination. It was also at this time that he declared that he supported the “complete reversal” of Roe v. Wade. Buescher has a long record as a partisan ideological warrior, an additional reason cited by the Leadership Conference on Civil Rights in opposing his confirmation.

Religious freedom is a core constitutional principle, and as the Constitution makes clear, there must be no religious test for public office. We rely on the federal courts to enforce all Americans’ constitutional rights. That means judges, regardless of their religious or personal beliefs, must be counted on to uphold Americans’ legal protections. Subsequently, a person’s political positions or legal ideology grounded in their faith does not make those legal and political stances off-limits to questioning or criticism.

With Senate Republicans rubber-stamping even President Trump’s most extreme and unqualified nominees, right-wing intimidation tactics must not prevent senators from fulfilling their constitutional obligation to ensure that lifetime federal judges are committed to protecting the rights of all Americans.

Thank you, Senators Harris and Hirono! It’s a new year, and it’s time to retire this old dishonest tactic of silencing and attempts to shame. Let the questions be asked and let them be answered. 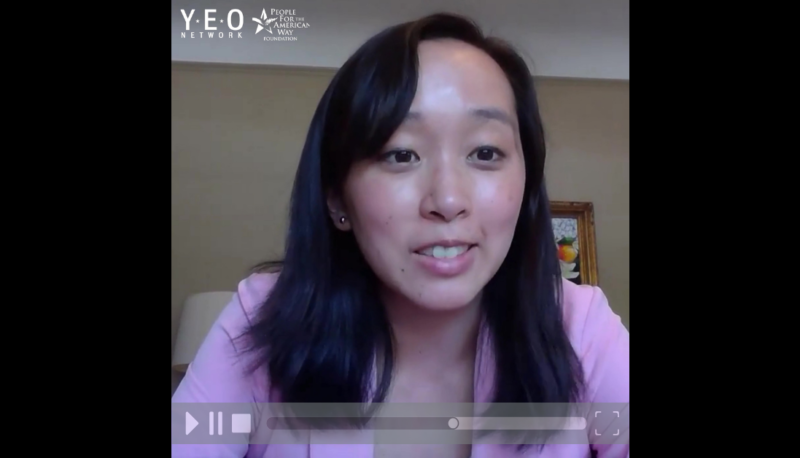