It turns out that many major U.S. corporations do spend a great deal of money on government – but not on taxes. Rather, they pay lobbyists to garner favorable government. According to a recent report in the International Business Times, at least 30 multi-million dollar American corporations spent more money lobbying Congress than in federal income taxes between 2008 and 2010.

Corporate behemoths such as General Electric, Verizon Communications and Wells Fargo managed reap huge profits and actually receive tax rebates, while shelling out huge sums to influence politicians. The article was based on staggering findings by Public Campaign: The 30 corporations studied racked up $164 billion in profits and received $11 billion in tax rebates – a feat made possible with the help of $22 million spent on federal campaigns and much, much more on lobbying – over the two year period, all while laying off employees and increasing executive compensation at a time of stagnant middle class wages.

It’s hardly a surprise that corporations are investing so much in political influence, judging by the tax loopholes they’ve created and enjoyed. But it’s clear that these policies don’t serve the American people. Because corporations don’t have to disclose their political donations, shareholders are all too often put in the position of indirectly contributing to political campaigns they may not wish to support. Most shareholders would prefer their investments to go towards strengthening the company and the economy, but according to the report’s co-author, Matthew Gardner, corporations “are so busy avoiding taxes, it’s no wonder they’re not creating any new jobs.”

The time has come to demand accountability and fair treatment of corporations. This begins with stopping the undue influence they enjoy due to their ability to spend endlessly on lobbying, a luxury that everyday Americans simply do not have. Shareholders can demand that their investments go towards developing better products instead of to political contributions by supporting the Shareholder Protection Act. The harm caused by extensive corporate influence in the political system is clear, and we need to act now to restore the balance of power to the people. 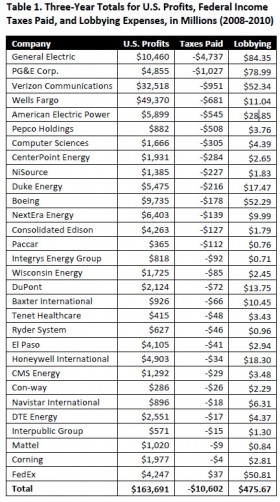