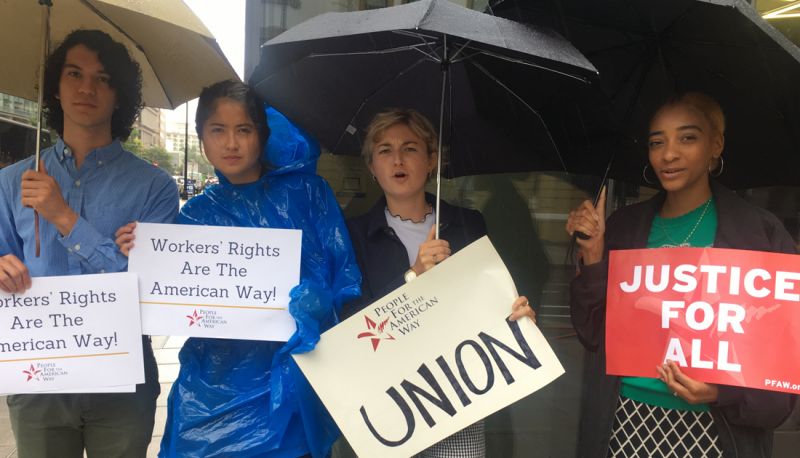 The Supreme Court in the Citizens United Era, 2015

The 2017-2018 term ended with a harmful opinion against public sector unions in Janus v. AFSCME. This 5-4 ruling is another instance of conservatives getting every bang for the buck they spent stealing a Supreme Court seat and giving it to their ideological colleague Neil Gorsuch. In an opinion authored by Justice Alito, the majority overruled an important 1977 case on the rights of working people (Abood v. Detroit Board of Education). The Court struck down requirements that public sector employees who are not members of the unions that are required by law to represent them pay “fair share” fees to cover the costs of that representation. According to the majority, those requirements force non-members to pay for speech on public matters (government spending) that they disagree with.

The Court framed this as a First Amendment issue, but even some other conservatives recognized the vacuity of the legal argument. For instance, Eugene Volokh and William Baude—no allies of unions—submitted an amicus brief explaining how this reasoning has no more First Amendment basis than invalidating income tax payments by taxpayers who object to government activities.

But Volokh and Baude were exceptions. Free speech is not the ultra-conservatives’ main concern. Starving public sector unions of resources has long been a goal of the far right. For instance, when the Court granted certiorari in this case, the anti-labor Freedom Foundation sent out a fundraising letter stating that a ruling against AFSCME:

The letter—made public in an amicus brief by Senators Sheldon Whitehouse and Richard Blumenthal—made clear that the goal was to affect the outcome of elections:

Unions like AFSCME will howl with outrage. No longer will their campaign contributions – which some might call a euphemism for bribes – be an overwhelming factor in so many political races.

But a First Amendment argument is a lot easier to sell to the press and the public. So just a few months after the fundraising letter, this same group submitted an amicus brief assuring the Supreme Court that it could safely overrule Abood, because unions would continue to function and labor-management relations would not be negatively affected.

The Janus majority revealed some indications that they were not exactly being sincere. For example, after deciding that Abood was wrongly decided, the majority determined that they could overrule it despite stare decisis. Part of the conservatives’ reasoning was how times have changed since Abood:

It is also significant that the Court decided Abood against a very different legal and economic backdrop. Public-sector unionism was a relatively new phenomenon in 1977. The first State to permit collective bargaining by government employees was Wisconsin in 1959, and public-sector union membership remained relatively low until a “spurt” in the late 1960’s and early 1970’s, shortly before Abood was decided. (citations and internal quotations removed)

But if the “spurt” the majority refers to occurred in the late 1960s and early 1970s, that means it occurred before Abood. So that supposedly changed circumstance isn’t as changed as a reader might be lulled into believing.  The decision continued:

While this sounds like a breathtakingly enormous increase in public-sector union membership, it fails to mention that the number of working people in private-sector unions has plummeted drastically since 1977—in part because of the same anti-worker elite whose money funds conservative political campaigns, as well as the campaign to steal a Supreme Court seat and make Janus possible.

Ominously, the majority’s use of the First Amendment against working people in Janus is part of a much larger scheme. Justice Kagan’s dissent (joined by the other three moderates) called Alito and his fellow conservatives out for weaponizing the First Amendment to impose their own policy choices on the nation:

And maybe most alarming, the majority has chosen the winners by turning the First Amendment into a sword, and using it against workaday economic and regulatory policy. Today is not the first time the Court has wielded the First Amendment in such an aggressive way. See, e.g., National Institute of Family and Life Advocates v. Becerra, ante, p. ___ (invalidating a law requiring medical and counseling facilities to provide relevant information to users); Sorrell v. IMS Health Inc., 564 U. S. 552 (2011) (striking down a law that restricted pharmacies from selling various data). And it threatens not to be the last. Speech is everywhere—a part of every human activity (employment, health care, securities trading, you name it). For that reason, almost all economic and regulatory policy affects or touches speech. So the majority’s road runs long. And at every stop are black-robed rulers overriding citizens’ choices. The First Amendment was meant for better things. It was meant not to undermine but to pro­tect democratic governance—including over the role of public-sector unions.

We examined this threat in a 2015 report entitled “The Supreme Court in the Citizens United Era,” authored by Jamie Raskin.

The critical doctrinal tool for empowering business corporations (and the class of wealthy Americans who own and run them) in this way is not the still-discredited Lochnerian concept of economic substantive due process, but rather the First Amendment, which has allowed the Court to promote this startling new corporatism in the name of free speech. Although the conceit of the age is that corporations are just winning “speech rights” that put them on an equal plane with individual citizens, the reality is that the new doctrine gives corporations essential powers and privileges over citizens in the political arena, the workplace, and the marketplace.

So make no mistake: While Janus is a disastrous ruling for working people, it is just the latest example of the ultra-right justices using free speech as a tool to empower the powerful and undermine the rights of everyday people.