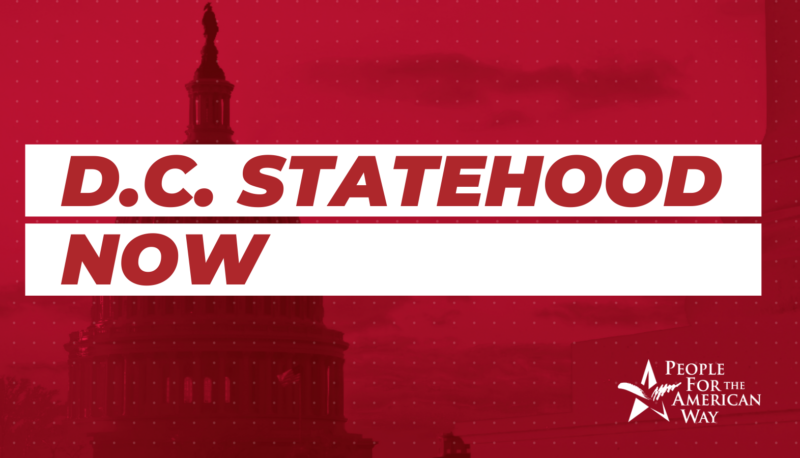 D.C. Statehood Is a Racial Equity Issue for All of Us

Washington, D.C. has a higher percentage of Black residents than any state in the country, and they have no voting representation in Congress. This is systemic racism in action. It is long past time to give Washington’s 712,000 residents the representation they deserve by making D.C. our 51st state.

It is shameful that people who live in the nation’s capital have no say in Congress. And it is unacceptable that local laws and budgets passed by D.C. elected officials can be overturned by members of Congress who decide to meddle in local decision-making. That explains why Washington, D.C.’s license plates include the slogan, “End taxation without representation,” a rallying cry by American colonists against the tyranny of British rule.

The disenfranchisement of hundreds of thousands of D.C. residents is fundamentally un-American and there is no good reason to allow it to continue.

There are bogus reasons to oppose statehood, and some Republicans in Congress have been trotting them out now that legislation to admit Washington, D.C. as a statehood bill is moving forward in Congress.

Some claim that Washington, D.C. is too small to be a state. But D.C. has more residents than either Vermont or Wyoming. There are currently six states whose population is less than a million. D.C. pays more federal taxes than 21 states—and more federal taxes per person than any state.

Some make the false claim that it would require a constitutional amendment to make Washington, D.C. a state. Not true. The Constitution clearly gives Congress the authority to admit new states. That’s how every one of the 37 states that were not initially part of the U.S. have joined the country. The original District of Columbia was created out of land from Maryland and Virginia. In 1846, a good chunk of D.C. was returned to Virginia. No constitutional amendment was required then, and none is required now to admit Washington, D.C. as a new state.

Some objections are so idiotic, frankly, that they must be a cover for pure partisanship or worse.

In March, a Heritage Foundation legal fellow testifying before Congress said that D.C. residents shouldn’t get representation in Congress because they can already influence congressional debates by placing yard signs where members of Congress might see them on their way to work. One Republican congressman said (wrongly) that D.C. would be the only state without a car dealership. Another said that D.C. doesn’t have enough mining, agriculture, or manufacturing. Mitch McConnell said the plan to make D.C. a state was evidence of “full bore socialism on the march.”

At least some Republicans are honest about their real reason for opposing statehood: they just don’t want to let D.C. voters elect Democratic officials who will support progressive policies supported by the majority of the American people.

But that is not a principled position. None of the objections to D.C. statehood hold water, especially when weighed against the basic injustice of disenfranchising hundreds of thousands of people.

Washingtonians have fought in every U.S. war. About 30,000 D.C. residents are veterans. But D.C.’s mayor does not even have the ability that governors have to mobilize its own National Guard—a fact that proved to be deadly during the Jan. 6 Capitol Insurrection.

The bottom line in this: how can we hold ourselves out as a model of democracy when we are the only democratic country in the world that denies representation and self-governance to the people who live in its capital? We can’t.

As the Biden administration recognized in announcing its support for D.C. statehood, it is long past time to correct this injustice. The House of Representatives voted on April 22, to admit Washington, D.C. as a state. Senate leaders must not allow filibuster rules or Republican resistance to prevent Congress from righting this wrong.