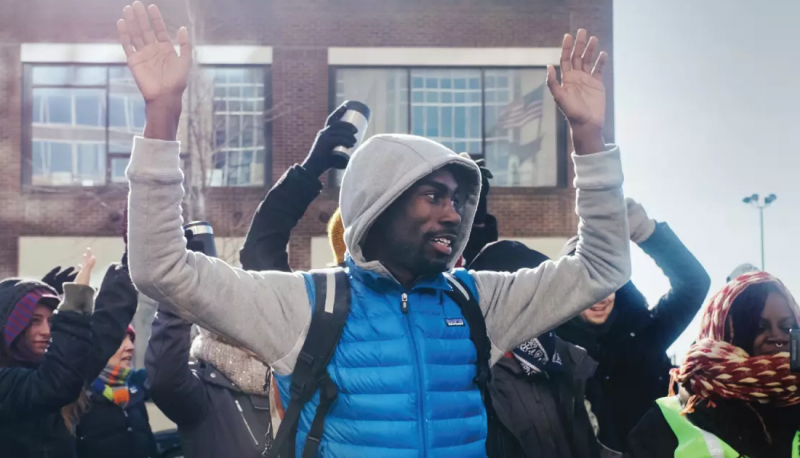 DeRay McKesson raises his hands in the “Hands up, don’t shoot” gesture in the early days of the Ferguson protests. [Photo by Bryan Sutter]

UPDATE: Judge Willett subsequently had a change of heart. In December 2019, the panel vacated its previous unanimous decision and issued a new one in its place, but this time with Judge Willett writing a dissent recognizing McKesson’s First Amendment rights.

A recent decision by a panel of three federal judges on the Fifth Circuit Court of Appeals, including one appointed by President Trump, allows a police officer to sue the organizer of a Black Lives Matter protest for an injury caused by an unknown individual who threw a rock at him during the protest. The ruling violates important Supreme Court precedent on the rights of protesters and threatens to subject them to the cost and other burdens of meritless lawsuits in the future that are intended primarily to intimidate critics (aka “SLAPP lawsuits”).

In Doe v. McKesson, activist DeRay McKesson helped organize a protest in front of the Baton Rouge Police Department as part of a string of Black Lives Matter protests across the country concerning abusive police practices. Because the protest was on a public highway in violation of the law, officers were ordered to make arrests, and one of those officers was hit and injured by a rock thrown by an unknown protester. Suing anonymously as John Doe, the officer filed a lawsuit for damages against McKesson and Black Lives Matter.

In accord with controlling Supreme Court precedent, the chief judge of the Louisiana federal district court dismissed the complaint. Black Lives Matter was not an entity that could be sued, Judge Brian Jackson explained, and the officer had not alleged the kind of specific connection between McKesson as protest organizer and the unknown rock thrower that is required by the Supreme Court. The 1982 landmark Supreme Court decision in NAACP v. Claiborne Hardware helped establish that peaceful protest cannot be over-regulated by the state, and required that in order to hold a protest organizer or group liable for violence that occurs during a protest, a court must find specific facts to avoid infringing on protestors’ First Amendment rights. The ruling established that protest groups or leaders must use words that are “likely to incite imminent lawless action,” or give someone “specific instructions to carry out violent acts or threats,” or  have “authorized, directed, or ratified specific tortious activity.” Since Doe’s complaint did not contend that McKesson had done any of these things, Judge Jackson dismissed it.

But in a three-judge panel opinion written by Reagan appointee Grady Jolly, joined by Trump appointee Don Willett and Bush appointee Jennifer Elrod, the Fifth Circuit partly reversed on April 24, 2019. The panel agreed that Black Lives Matter could not be sued, but ruled that McKesson could be liable if it could be proven that he was “negligent” in organizing a protest that he “should have known” would turn violent. The Court gave short shrift to Claiborne Hardware, quoting it only for the accepted proposition that the First Amendment “does not protect violence.”

The panel decision has already drawn significant criticism. One commentator noted that the ruling has “breathtaking” implications by suggesting that  actions by civil rights and other  protesters that block streets “strips these protesters of their constitutional rights.” The decision is at a preliminary stage and does not hold McKesson liable, but it presents a threat to protesters everywhere, particularly those without the resources to litigate lawsuits against them. Imagine if President Trump could sue the organizers of virtually any protest against him if a random person hits one of his campaign aides with a rock. Indeed, that is precisely the type of SLAPP-suit tactic used by white merchants and others against civil rights protesters until the Supreme Court put a stop to it in Claiborne Hardware.

Hopefully the panel’s holding will be reversed or otherwise rejected by other courts and will not lead to liability in this case. But particularly in light of other troubling rulings by federal courts increasingly influenced by Trump nominees, it is highly dangerous.